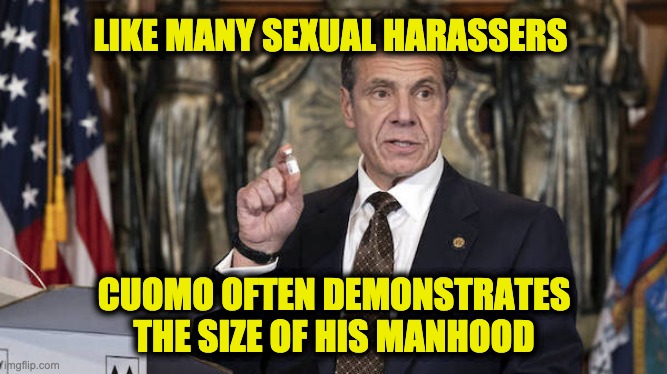 New York Governor Andrew Cuomo has been accused of sexual harassment lasting for years by a woman who worked in his administration. Lindsey Boylan was Deputy Secretary for Economic Development and Special Advisor to the Governor from 2015-2018.

Although she has previously discussed that her worst job ever was working for Cuomo, she may have been motivated to reveal her sexual harassment story because of Saturday’s rumors that Cuomo is being considered for Attorney General:

There are fewer things more scary than giving this man, who exists without ethics, even more control.

I saw how he wielded power for years. He takes advantage of people, including me.

But on Sunday via a Sunday Twitter barrage, Ms. Boylan took the brave step by telling her story of being harassed by NY Gov. Cuomo.

I could never anticipate what to expect: would I be grilled on my work (which was very good) or harassed about my looks. Or would it be both in the same conversation? This was the way for years.

She started with the story of her mother being harassed in her first job and promising herself that she would never let that kind of man win. She went on to explain what she faced from Andrew Cuomo. And she faced it alone because people saw it and did nothing, and there were other women harassed. 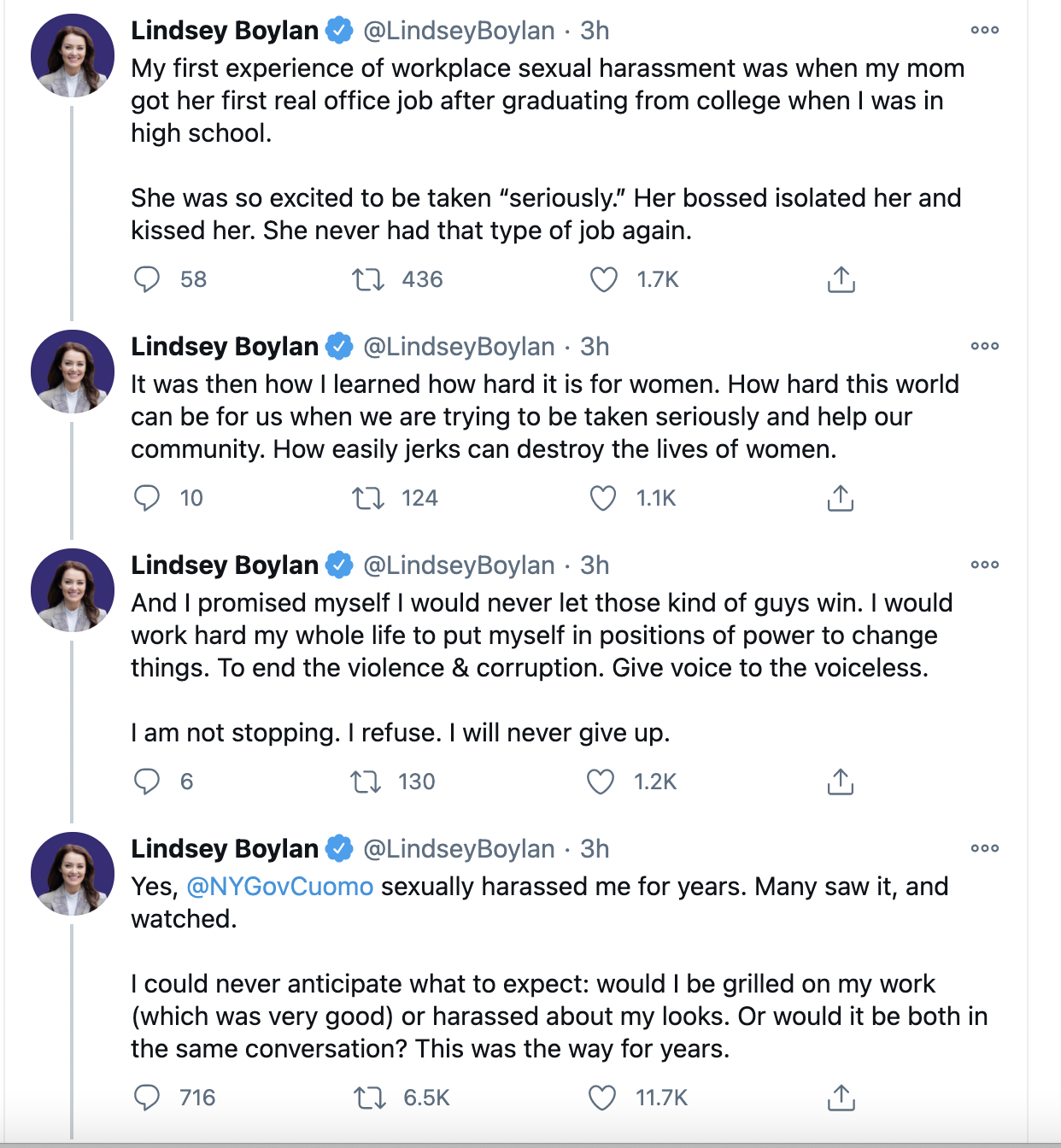 Not knowing what to expect what’s the most upsetting part aside from knowing that no one would do a damn thing even when they saw it.

And I *know* I am not the only woman.

She finished with a tweet saying, “I’m angry to be put in this situation at all. That because I am a woman, I can work hard my whole life to better myself and help others and yet still fall victim, as countless women over generations have. Mostly silently. I hate that some men, like @NYGovCuomo abuse their power.”

A week ago, Lindsey Boylan foreshadowed her tweets about Cuomo’s harassment when asked what her worst job ever was.

I’ve had many jobs. Waitressing at @Friendlys as a teenager was an infinitely more respectful environment. Even when I had bad customers who tipped poorly.

Seriously, the messages and texts I receive when I speak the truth about this…it’s a whole book of people who have been harmed.

Just two weeks ago, Alexis Grenell,  Cuomo’s deputy director of intergovernmental affairs when he was state attorney general, wrote an op-ed ripping the New York governor into shreds. Grenell, now a Democratic Party consultant, introduced us to Angry Andy.  Cuomo doesn’t act like a politician. He acts like an absolute ruler—a tyrannical one.

It takes a tyrant to treat a woman the way Ms. Boylan says Governor Cuomo treated her. Now that brave Lindsey Boylan has told her story, I hope that some of the other women harassed by Andrew Cuomo have the courage to come forward and back up Ms. Boylan’s story. 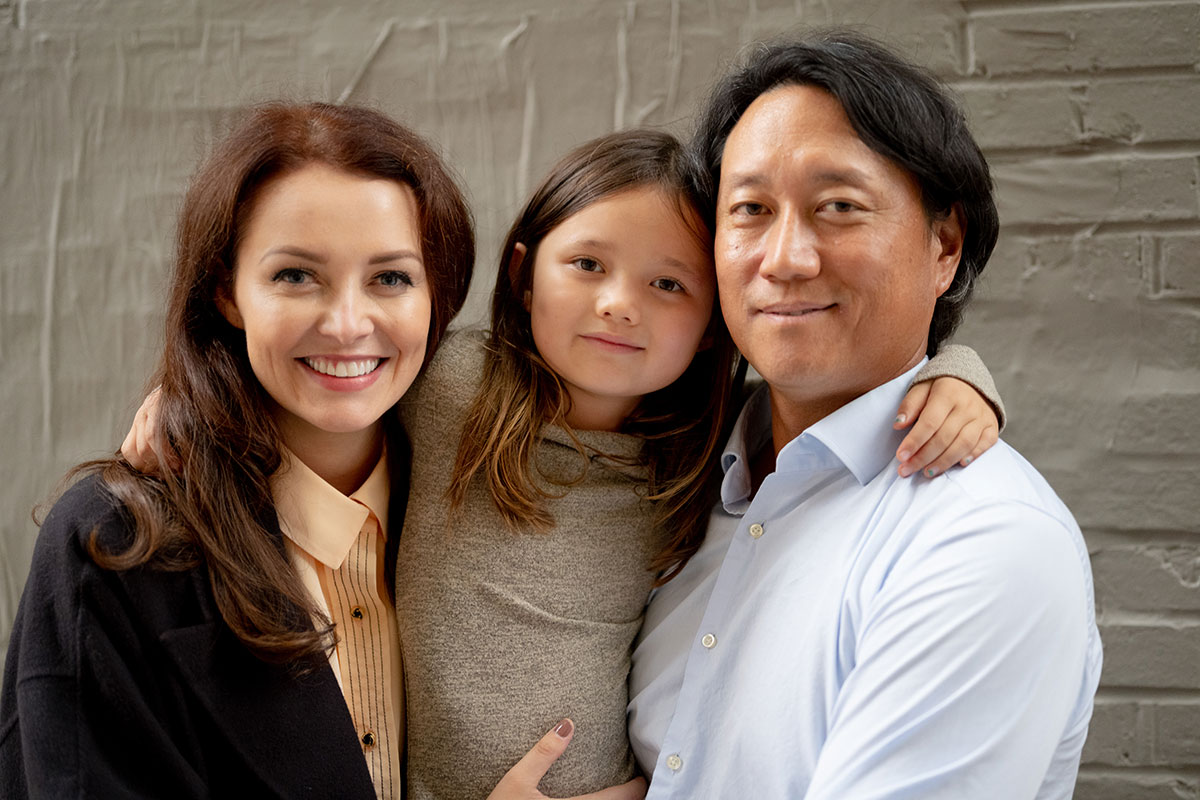 Lindsey Boylan With Her Husband LeRoy And Daughter Vivienne