Gov. Cuomo: ‘Santa’s Going To Be Very Good To Me’ Because ‘I Worked Hard This Year’ 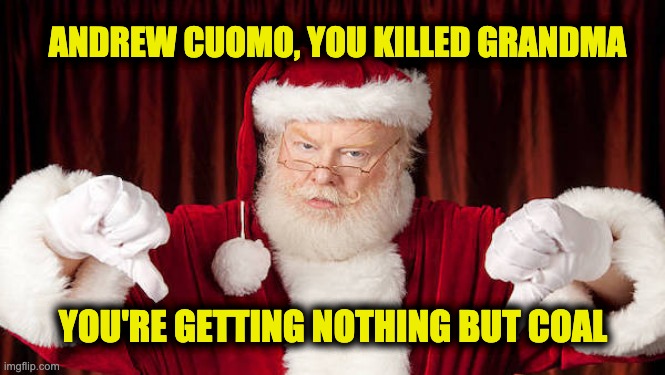 New York Governor Andrew Cuomo’s policies are responsible for killing between 11-15 thousand elderly American citizens. Despite that stupid decision which resulted in so many deaths, Cuomo shows no contrition. He still believes he did a wonderful job and his sh*t smells like roses. Cuomo Santa

Speaking at his press conference on Monday, New York Governor Andrew Cuomo claimed he was going to have a great holiday season, adding, “Santa’s going to be very good to me; I can tell. I worked hard this year.”

Killing old people must be hard work.  On March 25, 2020, New York Governor Andrew Cuomo ordered: “No resident shall be denied readmission or admission to a nursing home solely based on a confirmed or suspected diagnosis of COVID-19. Nursing homes are prohibited from requiring a hospitalized resident who is determined medically stable to be tested for COVID-19 before admission or readmission.” That order led to the COVID deaths of over 11K+ seniors.

Instead of showing leadership and taking responsibility for his directive. The NY Governor blamed everyone except himself for the Nursing Home deaths. He’s blamed the nursing home patients themselves, President Trump, healthcare workers, the feds, and the fact that old people die. And to add insult to injury, he wrote a book to say what a wonderful job he did managing COVID in NY State.

Fox News’ Janice Dean who lost both of her in-laws because of Cuomo’s nursing home order, was not happy about the Cuomo order.

He definitely worked hard on his book deal, his Emmy award and lying through his teeth all year.

It’s hard to believe that Santa will reward that kind of behavior. It’s more likely that Mr. Claus will fill Gov. Cuomo’s stocking with coal.

Fox Businesses’ Charles Payne got it right—he said it’s all about Cuomo’s ego:

“The egomaniac that Gov. Cuomo has either become or is finally displaying is so sickening,” Payne told “Fox & Friends.”

Payne said that New York state ranked #2 in coronavirus-related bankruptcies and death rates compared to other states. Payne explained that there were 185 deaths for every 100,000 people.

“He worked hard? Well, in New York state, a lot of other folks didn’t work hard. They got one of the highest unemployment rates — 10 percent,” Payne said.

And even those unemployed people probably worked very hard to find a job.

Doug Powers suggested that along with Grandma, Cuomo killed Santa.

Narrator: But sadly the governor was unaware that Santa Claus passed away earlier that year in a New York nursing home because of his Covid policies. https://t.co/LTjrygOxVp

Charles is correct, Cuomo is 90% ego and only 10% giving a rats arse about the people in NY State.

Below is a video of Governor Cuomo’s latest tone-deaf statement: