Will Cuomo’s ‘Penalty Of Perjury’ Threat To Nursing Homes Come Back To Haunt Him? 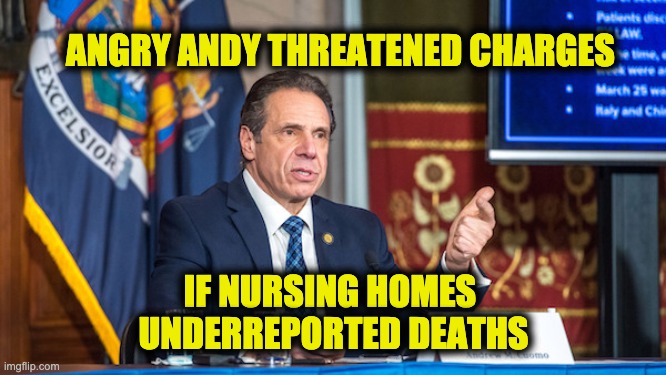 Andrew Cuomo sure likes to talk tough when someone else might be facing the consequences for bad decisions and hiding evidence. But does he have the cojones to hold himself to that same standard? Nah, his ego is way too big. Angry Andy was intent on seeing the buck stop ‘over there’ and was throwing other people under the bus for the decision he made. Cuomo used some powerful language to show just how seriously he was taking those nursing home deaths.  Cuomo penalty of perjury

The governor,  who is now facing festering scandals, sets the bar of accountability really high when someone else goes under the microscope. In this case, he used words like ‘felony’ and ‘perjury.’

“They submit these numbers under penalty of perjury…that is a criminal offense…if they misrepresent it, then you have a criminal fraud case”
Gov. Cuomo warns nursing homes re underreporting deaths at 5/1/2020 press conf@Voices4Seniors @rontkim @JaniceDean @NewYorkStateAG pic.twitter.com/CfHK98Hch2

Sometimes he even told people to resign.

Okay, sure. They submit these numbers under penalty of perjury. But what about his staffers? The ones we were told had been modifying the reports? Are they subject to the same penalties? And what role did Angry Andy have in making all of that happen?

Will other New Yorkers take these statements at face value and launch a criminal investigation into Andrew Cuomo’s role in this nursing home death scandal. Understand it’s not the deaths that is the real issue. It’s the cover-up and lies. If instead of writing a book about how wonderful he thought he was, Cuomo made a speech saying something like, “I made a decision because I thought it was the best for the state, but it was a bad decision, and I am sorry” the nursing home issue would have been over months ago. But instead, he covered up the number of deaths and blamed everyone but himself for the decision.

Republicans in the state Assembly drafted a resolution to impeach Gov. Cuomo amid mounting allegations of inappropriate behavior with younger women and the scandal over nursing home deaths from COVID-19, But will it pass?

Here’s a quick recap of ten recent developments on the nursing home side of the LuvGov’s festering wave of scandals: