Cuomo's handling of the virus was unforgivable. 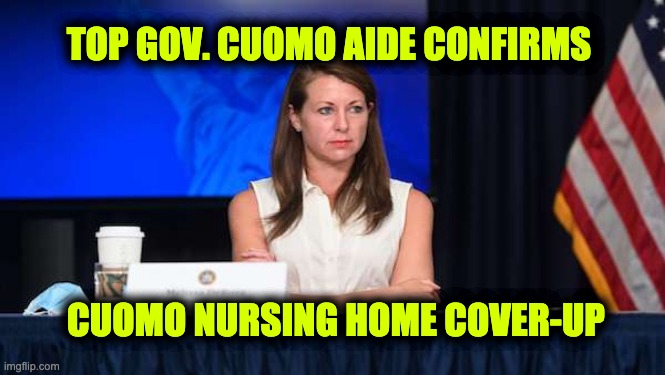 The math never added up. For months this site has been reporting that New York State has been lying about the number of nursing home deaths caused by the COVID pandemic because the reported number of deaths just seemed funky. Now thanks to the NY Post, we have confirmation that Cuomo covered up the number of people who died, “Governor Cuomo’s top aide privately apologized to Democratic lawmakers for withholding the state’s nursing-home death toll from COVID-19 — telling them ‘we froze’ out of fear the true numbers would “be used against us” by federal prosecutors.” Cuomo nursing home cover-up

On Wednesday, the state revealed the number of deaths was actually 15,049 residents in nursing homes and assisted living facilities were almost 10,000 more than the state Health Department was reporting two weeks earlier on Jan. 27, 2021.

I am not an attorney, nor do I play one on TV, but that sounds a lot like obstruction of justice to me. On the other hand, Cuomo’s aide did have one excuse for the cover-up,—Orange Man Bad (is that an acceptable excuse in a court of law?).

The stunning admission of a cover-up was made by Secretary to the Governor Melissa DeRosa during a video conference call with state Democratic leaders in which she said the Cuomo administration had rebuffed a legislative request for the tally in August because “right around the same time, [then-President Donald Trump] turns this into a giant political football,” according to an audio recording of the two-hour-plus meeting

In addition to attacking Cuomo’s fellow Democratic governors, DeRosa said, Trump “directs the Department of Justice to do an investigation into us.”

“And basically, we froze,” she told the lawmakers on the call.

It was August…they didn’t freeze… it was ninety degrees out–they covered-up the truth… She offered an apology for the Cuomo administration’s handling of nursing homes amid the pandemic. “So we do apologize,” she said. “I do understand the position that you were put in. I know that it is not fair. It was not our intention to put you in that political position with the Republicans.”

Governor Cuomo and his administration must be investigated from top to bottom and he must be stripped of his emergency powers.

Justice needs to be brought for the grieving families who have been ignored to protect Governor Cuomo and his Democrat allies in the Legislature. pic.twitter.com/N4B2c77u3w

Cuomo made a lousy decision. On March 25, 2020, New York Governor Andrew Cuomo ordered: “No resident shall be denied readmission or admission to a nursing home solely based on a confirmed or suspected diagnosis of COVID-19. Nursing homes are prohibited from requiring a hospitalized resident who is determined medically stable to be tested for COVID-19 before admission or readmission.”

Along with lying about the number of deaths, Cuomo denied that his infamous March 25th order led to nursing home deaths, blamed the deaths on others, and never apologized to the families of people who died because of his order, and even sold himself as the governor who best handled the CoronaVirus.

The list of Cuomo’s blame game includes the nursing home patients themselves, President Trump, healthcare workers, the feds, and the fact that old people die.  His latest claim was that the deaths were caused by government incompetence (but not his).

Cuomo was given an Emmy for his televised COVID updates and a leadership award by the Edward M. Kennedy Institute Award for Inspired Leadership. That award made total sense but not in the way the Kennedy Institute meant —Kennedy covered up his actions surrounding the death of Mary Jo Kopechne, and Cuomo covered up the number of nursing home deaths.

Worse than the awards is that during the pandemic, while angry Andy Cuomo denied the nursing home deaths, the NY governor wrote and published a book self-praising his handling of the COVID-19 pandemic. While I never read his tome, “American Crisis: Leadership Lessons from the COVID-19 Pandemic,” I guarantee it doesn’t recommend “lie about the number of people who died,” but that is what he died.

The admission by Gov. Cuomo’s top aide has sparked calls for a thorough probe from people of both political parties and prosecution of the governor. For example, NY State Senator, Alessandra Biaggi, ripped team Cuomo’s response.

"Politically motivated" is premium-grade red-herring spin, in this context.

Your admin made a decision to lie about the numbers, and you're out of excuses so you're pointing at Trump. It's nonsense, and you know it.

Republican State Senator Jim Tedesco said, “This obstruction of justice must be investigated on the federal and state levels, and my colleagues in the majority should finally use their subpoena power to get the truth under oath,”  revoking the Governor’s emergency powers and called for Cuomo to ‘resign or face impeachment and removal from office.” Tedesco was joined by other legislators.

There is no way to predict whether Cuomo will be impeached or face an obstruction of justice investigation, but one thing is sure Andrew Cuomo’s political career over. It was killed by Cuomo’s own hand.  If he decides to run for re-election or for a higher political office, he will lose. Americans are forgiving. If, when the high level of nursing home deaths became apparent, Cuomo said something like, “I made a bad decision with good intentions,” everything would have been over a long time ago. But Cuomo’s ego is too big and his cover-up too prevalent, Cuomo’s handling of the virus was unforgivable.