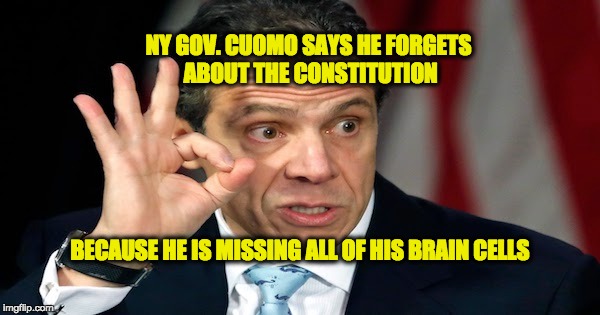 Governor Andrew Cuomo has hate in his heart for people not like him.  He has publicly stated his feelings about his bigotry towards anyone who doesn’t agree with his lock step totalitarian progressive regime.  His views is that they can get out of “his” state because they are not “real New Yorkers.”

Here’s the entire quote from Cuomo:

The Republican Party candidates are running against the SAFE Act — it was voted for by moderate Republicans who run the Senate! Their problem is not me and the Democrats; their problem is themselves. Who are they? Are they these extreme conservatives who are right-to-life, pro-assault-weapon, anti-gay? Is that who they are? Because if that’s who they are and they’re the extreme conservatives, they have no place in the state of New York, because that’s not who New Yorkers are.

Radicalized despots like Cuomo enjoy being locked into echo chambers where they only hear what they want to hear and they recoil as if stung by being challenged by anything resembling facts or logic.  So it comes as no surprise that outside of his armed bodyguards and those of his limousine liberal friends, I doubt that Cuomo has any friends that are pro gun.

So it comes as no surprise as he seeks to punish the gun owners (most of whom live upstate) with what is tantamount to a poll tax, that being a fee in order to exercise a right that should be free.

It is all ready true that in New York you have to pay an exorbitant amount of money not just to carry a firearm, but just to be able to BUY a firearm.

Now, Governor Cuomo and his cronies are pushing forth a plan to make gun owners perpetually pay for their right to keep and bear arms by forcing them to purchase liability insurance for their guns.

A proposal now under debate in the Insurance Committee in the state Assembly, if approved, could require gun owners to purchase $250,000 in liability insurance.

Let’s put this in perspective.  I all ready mentioned that this is akin to a poll tax which have been ruled unconstitutional.  But let’s take it another step, this is like making everyone who can form words to buy liability insurance in case they say something that offends someone else.

Or forcing people to buy 4th Amendment insurance in case that someday they have their property seized they’ll have insurance in order to pay the officers doing the seizing.

But it is these types of mentally deficient ideas that have seen progressives dwindle to a few bases of power in the United States.  Mostly New York and California.  Fortunately, with the election of Donald Trump and the possibility of the Supreme Court moving a little more to the right, the plans of infringement that have progressives like Cuomo watering at the mouth will come to naught.

Of course it is not a done deal yet as there are many in the New York legislature that do not adhere to Cuomo’s view of a despotic New York.

Assembly Minority Leader Brian Kolb had this to say:

“I think it’s indefensible and irresponsible to even consider a piece of legislation like this, dealing with the very folks, they are the law abiding citizens in our state.”

“This is one more cost, one more burden because the rest of our activities are ineffectual at best in dealing with this issue.”

Cuomo’s plan is to make the entire state of New York into a place where only people like him want to live.  When his actually SAYING it didn’t drive enough people out he continued to find ways in order to force liberty loving New Yorkers out of the state.

Someone should tell this clown that the “Empire” State is just a nickname and he is NOT actually an Emperor, regardless of how much of a dictator he tries to be.

I suggest the good people of New York get together and vote for a governor who actually wants what is best for New Yorkers next time because Cuomo is just a drain on the entire place.

Of course, I’ll be more than happy to visit once National Reciprocity passes and I can carry my sidearm all around that place and give Cuomo the ol Italian Salute…figuratively of course. :o)