More Trouble For The Luv Gov? 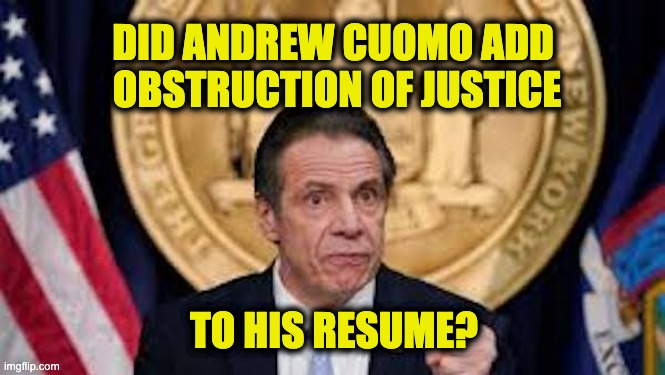 Debra Katz, the attorney for Cuomo accuser Charlotte Bennett, sent a letter of complaint to NY AG Letitia James about the reports that Gov. Cuomo is “running his own investigation” of the sexual harassment claims against him (letter embedded below) To this observer, the Cuomo “investigation” seems more like witness intimidation. According to a report in the Albany Times Union, the Cuomo administration was offering attorneys to meet with staffers before they were interviewed by James’ office and even to accompany them to the interviews.

The separate investigation by the governor’s office into the woman’s groping allegations is unfolding as other staffers were recently informed that an attorney could be made available to accompany them if they are interviewed by the attorney general’s investigators. The Executive Chamber staffers also were instructed that an attorney would be available to meet with them ahead of those interviews, according to a person with knowledge of the matter.

That has unsettled some staff members, according to the person, because they are concerned about the implications of relying on an attorney provided by the Executive Chamber to potentially sit in on their interviews with the attorney general’s investigators.

That’s not all. In her letter to Letitia James, Attorney Debra Katz reports:  “it is my understanding that these attorneys are also “debriefing” staffers after their interviews with investigators.  This is highly improper, and we object in the strongest possible terms to this obvious interference with what you have stated would be a “thorough and independent “investigation.’

Katz believes that these actions will have a “chilling effect on potential witnesses or other accusers who wish to come forward but fear job-related retaliation” if they speak out. She has already spoken to witnesses who told her that they were afraid of facing retaliation “if they refuse to cooperate with the Executive Chamber’s lawyers” and felt “constrained” from speaking about Cuomo’s conduct and their work environment in front of administration attorneys. “We believe that this offer of counsel constitutes a deliberate attempt by the governor to interfere with your office’s investigation,”

After reading the letter below, I believe NY AG Letitia James should be adding obstruction of justice to her investigation of Andrew Cuomo’s crimes.