Cuomo: It’s Bad That COVID Vaccine Might Be Available Under Trump (Video) 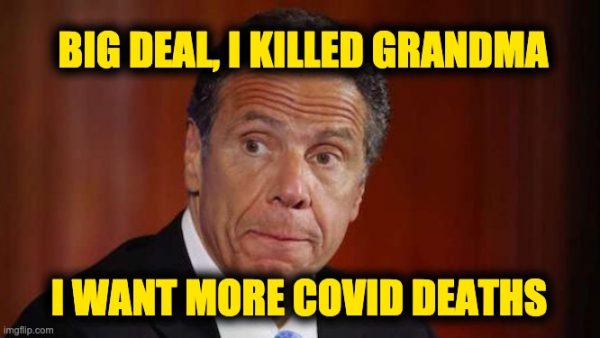 Andrew Cuomo, the far-left governor of NY State, who shares a brain with his brother Chris, is a media darling held up as an example of how to handle the pandemic, despite the fact he issued an order directing nursing homes to take in patients that had the highly contagious coronavirus that would have otherwise been sent to hospitals. His order led to the death of 11-15,000 seniors, but apparently, he wants more blood on his hands. Cuomo COVID vaccine

Pfizer says an early peek at its vaccine data suggests the shots may be 90% effective at preventing COVID-19. The interim analysis looked at 94 infections recorded so far in a study that has enrolled nearly 44,000 people. https://t.co/FNVgEG084Z

“The good news is the Pfizer tests look good and we’ll have a vaccine shortly. The bad news is that it’s about two months before Joe Biden takes over, and that means this administration is going to be implementing a vaccine plan. The vaccine plan is very important and it’s probably the most ambitious undertaking since COVID began,” Cuomo told former Clinton press secretary George Stephanopoulos.

“And the Trump administration is rolling out the vaccination plan and I believe it’s flawed. I believe it learns nothing from the past. They’re basically going to have the private providers do it, and that’s going to leave out all sorts of communities that were left out the first time when COVID ravaged them,” he added.

If he cared about NY State residents, Andrew Cuomo would be happy that a vaccine was showing real promise.

Remember this is the guy who blamed the dead seniors, nursing homes, president trump–anyone but himself for his order to send seniors to nursing homes. That’s despite the evidence that his order was spurred by political donors,

.@AndrewCuomo says it's "bad news" that the COVID-19 vaccine will come while @realDonaldTrump is in office.

"We can’t let this vaccination plan go forward the way the Trump administration is designing it because Biden can’t undo it two months later." pic.twitter.com/EqIbY8vgMS

“We can’t let this vaccination plan go forward the way that Trump and his administration is designing it because Biden can’t undo it two months later. We’ll be in the midst of it and I’m going — I’ve been talking to governors across the nation about that, how can we shape the Trump administration vaccine plan to fix it, or stop it before it does damage,” Cuomo said.

But Andy, the President’s plan relies on each state and private enterprise. If it screws up—it’s because of you.

“It’s not political” Cuomo is truly one of the worst politicians in our lifetime.

They'd rather see you suffer & die than give Trump a win. https://t.co/WlVSfIHvMM

So first Andrew Cuomo kills 15,000 nursing home residents and now he's going to block the coronavirus vaccine because he hates Trump? This is insane. https://t.co/IsFmClgqob

Insane, but this is the modern left.

Why does @NYGovCuomo enjoy killing people so much? https://t.co/PCacIfa442

Well, he IS a liberal Democrat, so…

And of course, Cuomo got no push back for his outlandish comments. After all, Stephanopoulos is a Democratic Party operative.

The worst part is how @GStephanopoulos offers no pushback or questioning about any of it. https://t.co/JCxML4K8uL

That’s why we call it the liberal media.