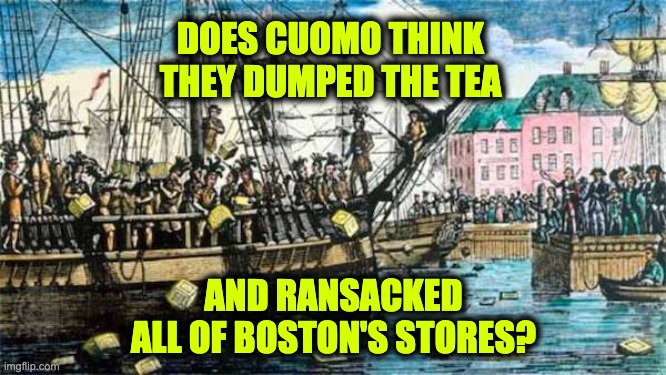 CNN anchor Chris Cuomo made an assertion that the criminals currently rioting are akin to tea partiers during the American Revolution.

It’s been established that he shares a brain with his brother Governor Andrew Cuomo. When Chris made that comparison of rioters to the Boston Tea Party, It must have been Andrew’s night to use the brain.

It’s one thing to support the peaceful protesters. Perfectly understandable as the nation copes with this tragic case of the murder of George Floyd. It’s another thing to support rioters who are taking advantage of the tensions and burning down cities and looting from legitimate businesses.

With the illegitimate comparison he made, Chris Cuomo left planet normal and transported himself to a place where no man with an I.Q. under twelve has gone before.

On May 31st, Cuomo took the time on multiple occasions to compare the arson and violent riots throughout numerous American cities to the Boston Tea Party. The 1773 tea partiers dumped tea into the ocean to protest “taxation with representation.” They didn’t break into local small businesses and steal the equivalent of TV sets.

“The motivation for the wrong matters … Why did you light this car on fire?” Cuomo asked his viewers Friday. “That’s one kind of wrong,” he continued, later alluding to it not being any different than the Boston Tea Party and the civil rights movement in the ’60s.

The American Revolution and The Civil Rights movement were singular events that can not be and should not be compared to other historical periods. Still, Cuomo went there and then doubled down.

“Why would you listen to the message to go home and observe a curfew as someone who respects the law when you don’t believe the law is being respected when it comes to you,” he said, justifying their actions.

Gee Chris, if I didn’t believe in the laws against theft, would it be okay if I went to your house broke the windows, went inside, and took all of your stuff?

“People will judge it, that’s fine you should also judge the Boston Tea Party, You should also judge what happened in the 60s that led to the civil rights … most of the major movements in American history have started at the grassroots level and, at some point, have turned into direct conflict with the American government Remember your history before you judge your present,” he warned.

I agree with the recommendation to remember your history but remember it correctly. The “Tea Partiers” dumped taxed tea off a ship, they didn’t set a city on fire. And they didn’t attack trash the CNN building like the rioters did— attacking Cuomo’s colleagues in Atlanta.