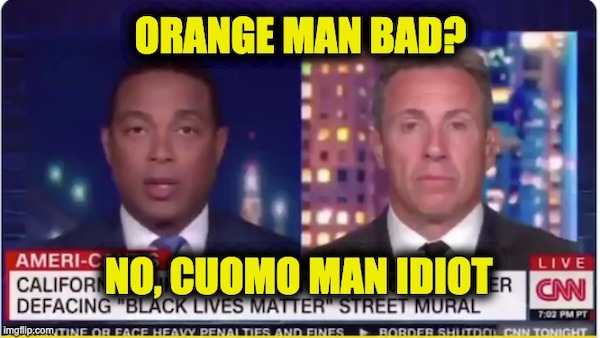 CNN, the most BUSTED name in news. How corrupt are they? Let’s have a look.  Cuomo and Lemon

As we now know from the leaked reports of CNN’s 9am meetings with Zucker, the network has long since given up on reporting anything that might resemble ‘information’.

It has been replaced with propagandistic talking points detrimental to Trump.

Sometimes, they get so far out over their skis in trashing Trump that they can get in the way of medical science and cost innocent Americans their lives — like when the media Juggernaught made it a cardinal sin to refer to the Lancet Report that a certain antimalarial drug showed some promise in treating the ‘Rona.

Months later, with a body count they assure us that is ‘all Trump’s fault’ we have learned that this demonized drug can actually cut the lethality of the Wuhan Wheezer in half.

So, now that CNN is done being wrong, do these Americans caught in the political crossfire get to be any less dead? Of course not. It’s never the Network that pays any price for the propaganda they spew. That price is payable by the little people.

CNN has been solidly on the side of the uprising since Day One, and they have had precious little to say about the rights of anyone they have trampled or the community consequences of gutting a police force.

Rather, when such topics are raised, they are met with scoffing an eye-roll like what we see here:

Tonight on @CNN, @ChrisCuomo & @donlemon mocked the “right wing” media for claiming that crime is rising in US cities.

But apparently, Chris and Don don’t read or watch @CNN, @nytimes, @CBSNews, @NYDailyNews, or maybe they do & are just lying to their viewers.

But you will notice this video shows what they themselves are unwilling to say on TV. They show that the media themselves — including headlines from CNN itself — back up exactly the claim about rising violence that Lemon and Cuomo are assuring us are bulls**t.

Chris Cuomo couldn’t POSSIBLY have any ulterior motives in saying that all is well in New York, could he? No conflicts of interest or entanglements we could think of?

“Obviously, I love you as a brother,” Cuomo told the governor. “Obviously, I’ll never be objective. Obviously, I think you’re the best politician in the country. But I hope you feel good about what you did for your people because I know they appreciate it. Nothing’s perfect. You’ll have your critics. But I’ve never seen anything like what you did, and that’s why I’m so happy to have had you on the show.” — Yahoo

Keep in mind, however, that Gov. Andrew Cuomo and his brother Chris share one brain, and Chris may have made the statement above on a day when it was Andrew’s turn to use the brain. It certainly seems like a brainless discussion.

Then again, should we expect any integrity from the network that faked the dramatic ‘ending of quarantine’ of a guy who was outside in another part of the city, arguing with a stranger just days earlier?