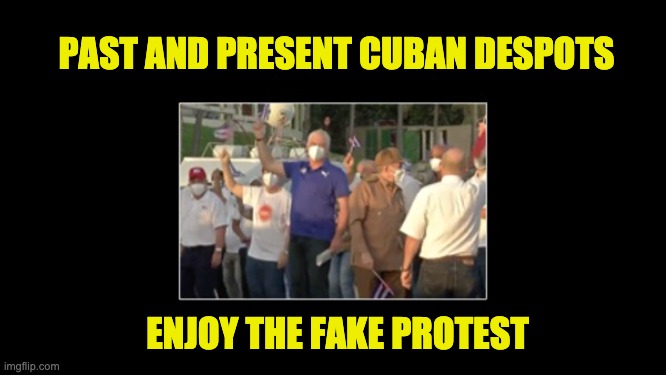 Now we get to find out if the leftist Democrats hate disinformation more than they love authoritarian regimes. Will they decry what Cuba is doing? It’s doubtful.  The Protests in Cuba are a very inconvenient stick in the spokes for the Democrat messaging machine. And the counter-protesters in Cuba are doing the bidding of the Communist regime.  Cuba’s communist despots

On the one hand, America’s Dems have long been trying to paint themselves as the truest friend any grassroots protester could ever want. (Pay no attention to their intense opposition to any such groups supporting Republicans. Nothing to see there.)

On the other hand, they are very reluctant to say anything negative about authoritarian regimes in places like Cuba or Venezuela because their policy prescriptions have so much overlap. Bernie Sanders eventually pulled down the blog post he had posted on his official Senate page where he praised Venezuela, Ecuador, and Argentina while throwing shade at the ‘banana republic’ of America. (But not before it was archived).

A DailyMail photographer waiting out a mandatory quarantine in his hotel room looked out his window to see an unexpected sight. He grabbed his camera and caught the tyrants in the act of spreading a propaganda lie.

In his photos, large crowds of plainclothes plants were seen being loaded into military convoys after a pro-government ‘rally.’ The fake rally was held outside the American Embassy in Havana to perpetuate the lie that Cubans love their govt. 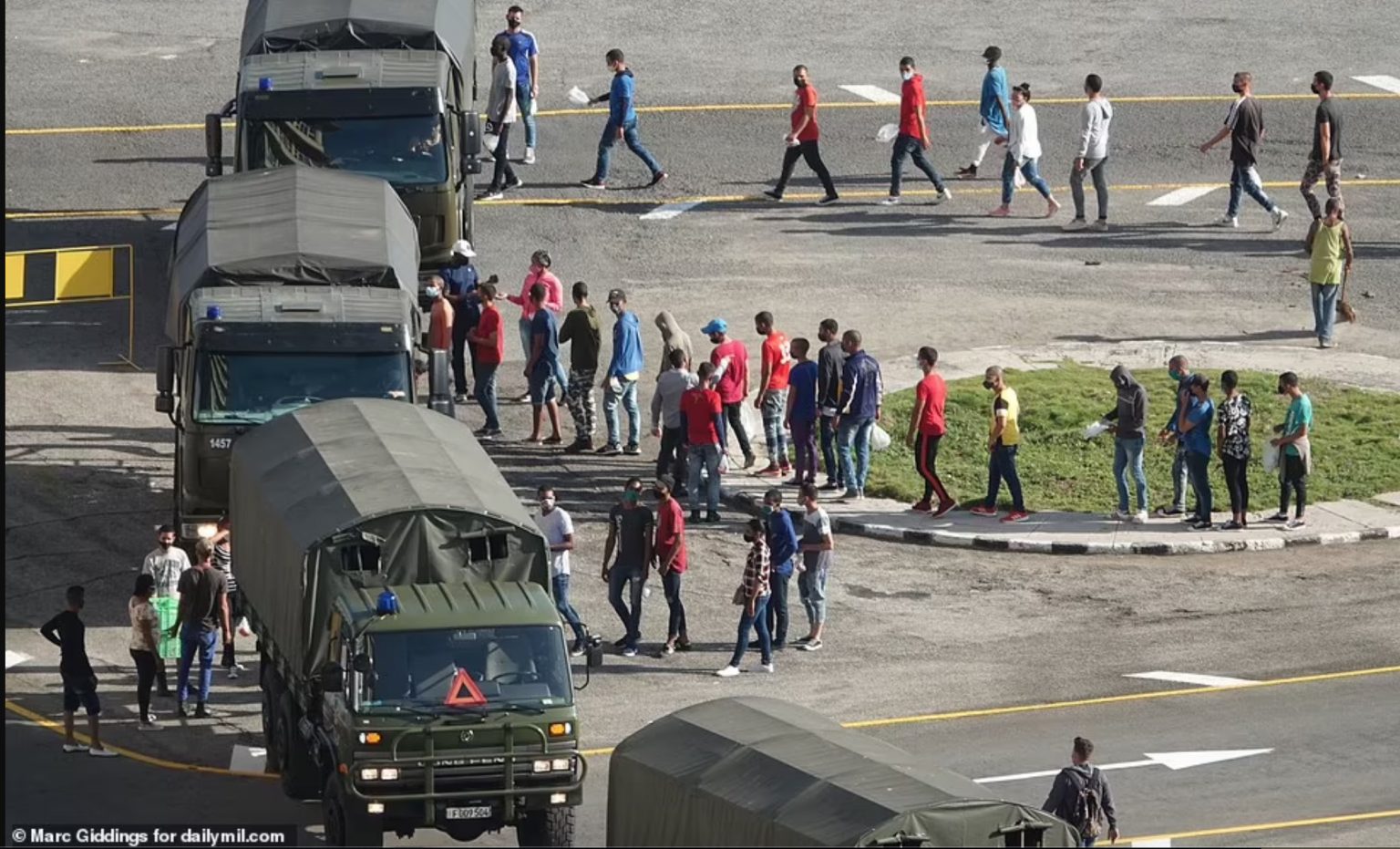 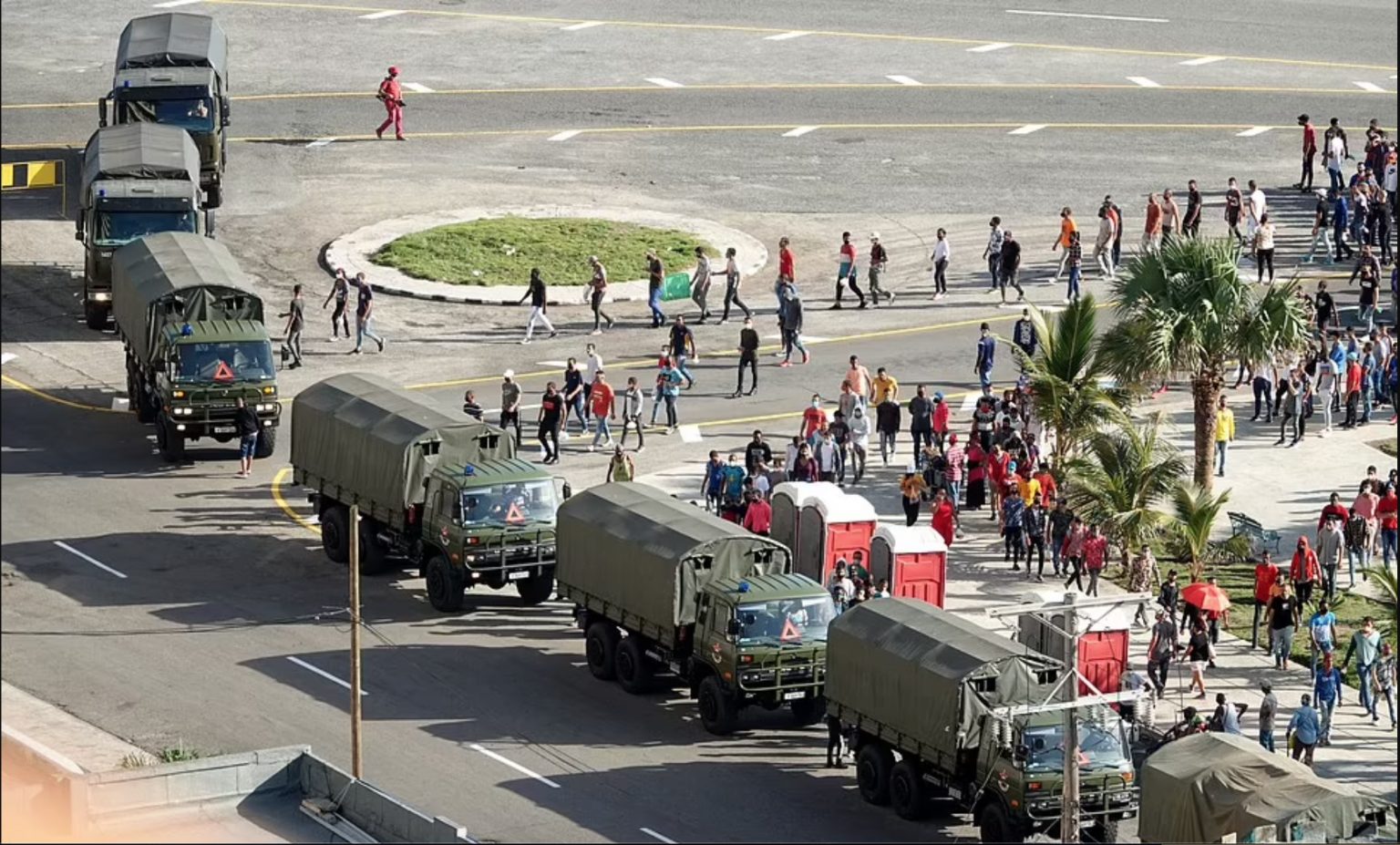 You can see the rest of his photos in the original story here.

The gathering, attended by former president Raul Castro and his successor, Miguel Diaz-Canel, was held opposite the US Embassy and intended to send a message that Cubans were unwavering in their loyalty to the repressive Communist government.

But these exclusive photos – shot from a hotel where DailyMail.com undercover journalists were spending a mandatory six-day Covid quarantine – told a very different story.

Long after the local and international TV cameras and other media had departed, the casually-dressed troops were brought to attention and marched onto around 20 trucks lined up to return them to barracks.

The great deception was part of Cuba’s ongoing effort to persuade the world that its population is happy under their rule, and the US-led sanctions were entirely to blame for their situation.

The Cuban despots didn’t know that there were undercover reporters with a street view from his hotel room right across the street who happened to be looking out the window at the end of the farce.

Unfortunately for the American leftists and their Communist buddies in Cuba, there was another demonstration well beyond the reach of Cuban President Miguel Diaz-Canel for which he couldn’t provide counter-programming.

It showed up in D.C. and looked like this:

WATCH: Video shows massive number of protesters marching towards White House to protest and to demand Biden to take action on Cuba pic.twitter.com/Gyk0M9zUYZ

Can we expect a united front of formal denunciations of the Cuban regime from elected leftists in the Democratic party? Of course not. The hard left wing of the party LOVES any type of socialist and won’t speak out against anything unless they can find a way to blame Donald Trump, the GOP, or Jews.