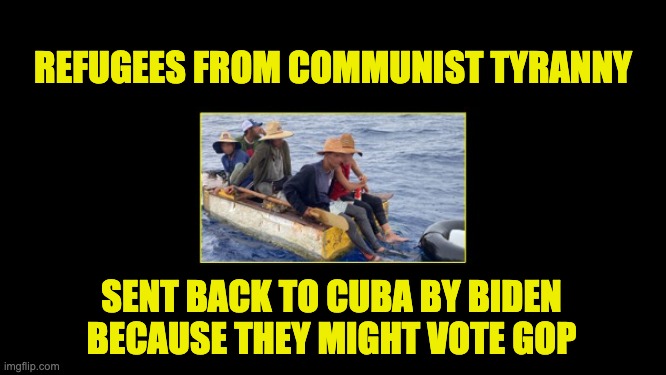 Since Joe Biden moved into the oval office, more than a million refugees have crashed the US-Mexico border, with complimentary housing and airfare. But 27 refugees flee here from Cuba, and SUDDENLY it’s time for a crackdown. Cubans are turned away

What’s done in practice isn’t even consistent with this administration’s official policy. They told Cubans AND Haitians not to come here, that they would be sent home. When hundreds of Haitians crash our border on a single day, they were treated the same as any other ‘refugee’ swarming our border. In one instance, 400 people, mostly Haitian, were picked up in Del Rio, Texas, on a single day.

But let the feds catch twenty-seven people from Cuba trying to flee a tyrannical communist hellhole, and they are marched right back to the police state they risked shark attacks to escape from.

The Cubans Stay Home announcement was recent and (supposedly) covered both groups. What they REALLY meant was ‘Cubans are persona non grata.’ Biden’s DHS Secretary Tells Cubans And Haitians Fleeing Turmoil ‘Do Not Come To The U.S.’ (VIDEO)

Kamala, who is supposedly in charge of the illegal immigration problem, is now half-assing her response, pretending that the million or more people coming here can’t be stopped from coming unless something changes in the ‘sending’ countries.

The Strategy is organized into five pillars:

Dems are all about amnesty for illegal aliens, but they want a certain KIND of amnesty. The kind that helps them achieve a permanent one-party rule of America. They tipped their hand in a leaked memo from Palmieri:

It finished, “If Democrats don’t try to do everything in their power to defend Dreamers, that will jeopardize Democrats’ electoral chances in 2018 and beyond.”

But it’s compassionate for the Democrats to let people stream in illegally, right? Yeah, not exactly.

Biden isn’t directing people to swarm the borders at lawful points of entry. They are coming in UNlawfully. That puts them in contact with the criminal elements who control the other side of the border, which leads to stories like this:

Why is SF on track to lose 1,000 people to overdoses this year? Here’s Chesa Boudin on users and dealers: pic.twitter.com/8MONZWVBKP

A short summary for anyone not clicking through is simple: the AG of San Francisco is not enforcing drug trafficking laws because he is ‘compassionate’ toward the people who are trafficking drugs. You see, if they don’t traffic drugs, they might never be able to repay the human traffickers who brought them here. And if they don’t pay up, there are relatives back home in Honduras that can be in danger.

So, we have skyrocketing levels of drug overdose deaths in America, and the ‘compassionate’ course is turning a blind eye to drug trafficking because it might hurt people who entered the country illegally.

Great plan. So our current stance of (nearly) unlimited illegal immigration will do what, exactly? Oh right, it will just magnify this problem by bringing in more people who are becoming indentured servants to crime lords who will traffic more drugs on our streets.

We have an administration that keeps out the hardworking Cubans who actually love what America is and are more interested in opportunities than handouts. Still, because Americans with Cuban heritages tend to be politically conservative, they are locked out while throwing the door open to people with little or no interest in whether America’s actual values are worth keeping.

That builds on what was happening the last time Biden was working out of 1600. Obama gave us words like ‘DACA’ and ‘DREAMers’ (something a judge and a younger version of Obama himself have both described as beyond the scope of Presidential authority) while eliminating America’s ‘Wet Foot Dry Foot’ policy.

Even more, telling was the length to which Obama’s DOJ actively went to court seeking to eject a family who had already gone through the asylum process and had been granted religious asylum by an American court. The Romeike family consisted of Christian home-schoolers. This was not the kind of asylum-seeker Obama wanted to encourage.

We’ve come to the point where even elected Democrats are crying foul over Biden’s policies and saying they are detrimental to the nation. The rest of us were saying the same thing from the beginning. But, to put it in language, even Biden fans could understand…

Cubans are turned away