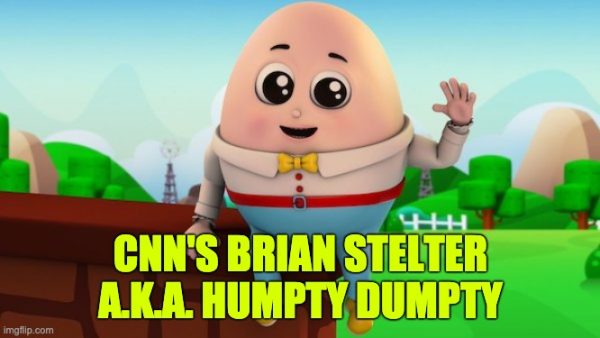 On Tuesday, CNN’s Brian Stelter appeared on CSPAN’s “Washington Journal” to promote his anti-Trump/anti-Fox News book, “Hoax,” and got an earful from several callers, one of which called him “Humpty Dumpty,” a nickname used by Sean Hannity.

One of those who called was a man from Lakeland, Minnesota man who, Newsbusters tells us, “calmly told Stelter CNN was ‘the enemy of the truth.'”

Tim Graham posted a transcript of the call, which was quite brutal:

MINNESOTA CALLER: You guys always talk about how many times Trump has lied. I have calculated that I think with your chyrons — I don’t know if there is any journalists left at CNN but I know that if I were to estimate, about 300 different distortions or misinformation that we get out of CNN and you have to watch them in the airport, which is harsh!

But if you added all that up to 46 months, it comes out to be 300,000 plus distortions of truth. So my thing here is that you guys, this is how low you will go, is that you went out and made lies, and you defamed a child and then you had to settle out of court to pay this child for distorting information about this young individual [Nick Sandmann].

Stelter, Graham wrote, responded by falsely claiming conservatives have been radicalized by media-bashing from sites like Newsbusters.  Seriously.

“I’m grateful for the call, and I know you are not the only person that feels this way. There has been a process of radicalization that’s happened in this country, with media-bashing that is absolutely unprecedented,” he said.  Keep in mind, Stelter frequently bashes Fox News.

“You know, 20-30 years ago, conservatives talked about media bias, and there were some really valid points to that critique. It is absolutely true that lots of journalists are based in New York and Washington, they’re based in big cities, they have liberal leanings. And mainstream newsrooms are built to make sure that bias does not seep into the news coverage and yet, sometimes it does. I absolutely acknowledge that. I think it’s different to talk about things as if they’re enemies. No American is an enemy of another American. No news outlet is an enemy of America,” he added.

Actually, conservatives have been concerned about media bias for more than 30 years.  I first became aware of it in 1990 when I read Marlin Maddoux’s book, “Free Speech or Propaganda:  How the Media Distorts the Truth.” If you haven’t read it, I suggest you do it.  Even though much of the information is somewhat dated, it gives you an idea of just how insidious and pervasive media bias really is.

Since that book was written, the so-called “mainstream media” has completely gone off the rails and is literally nothing more than the propaganda arm of the radical Democrat Party, practically incapable of telling the truth about anything whatsoever.

CNN, by the way, is pretty much one of the absolute worse in this regard.  As we and others have repeatedly reported, CNN and MSNBC, the official network of insane liberal hate and stupid lying propaganda, frequently attacks conservatives on a personal level, calling them stupid, or worse.