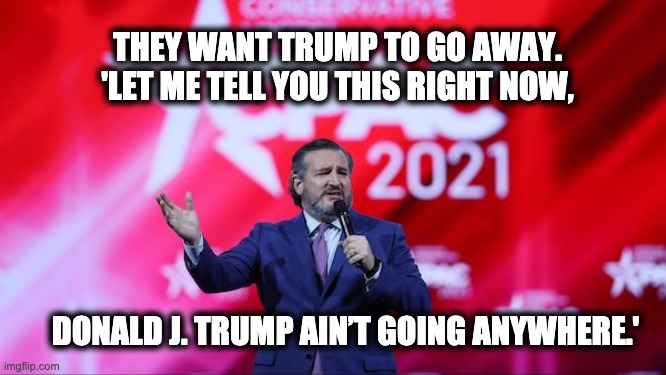 There is a whole lot of uncertainty out there regarding what’s in store for the Republican Party in general and Former President Donald Trump’s role in that future. During his Friday CPAC speech, Senator Ted Cruz (R-TX) rallied the crowd with answers to those questions. Cruz excited CPAC

Trump was a unique Commander in Chief. He didn’t fit the traditional image of a POTUS by “acting presidential,’ and was the first president to fight the party establishment. Thus, not everyone within the GOP fully supported Trump’s actions and behavior, even if they were largely aligned with him policy-wise.  Some Republicans have spoken out against the former POTUS since he’s left office, forgetting the fact that the MAGA crowd is the largest part of the conservative movement, and the conservative movement is the largest part of the Republican party.

Like Texas Senator Ted Cruz, others have a much different take on how Trump fits into the GOP and conservatism as a whole. And that’s what he did during his Friday CPAC speech. He started by making fun of the Cancun controversy;

God bless CPAC. I got to say Orlando is awesome. It’s not as nice as Cancun, but it’s nice. And I got to say, what an amazing array of speakers here at CPAC. For a second there, I thought we were in Des Moines. That one took people a minute.

In the first part of his address, Cruz slammed the hypocritical COVID rules enacted by liberal governors.  And claims by people like Dr. Faucci seemingly saying Americans will have to wear masks forever.

We see leftists across the country shutting down churches. California, they’ve helpfully explained, you can go out and protest. You can scream and yell, “Abolish the police,” and this virus magically, no one will get infected. You can French kiss the guy next to you yelling, “Abolish the police,” and no one will get infected. But if you go to church and say, “Amazing grace,” everyone’s going to die.

Remember, this is all about science. It’s actually, it may not be elevation. I think it’s that there are hormones that are released in your thighs when you’re sitting, so you can sit at the table and there’s no virus being transmitted, but if you stand up, put the mask on.

And listen, let’s be clear, this is a dangerous virus. But these collectivist statists, okay, now they’re saying, “Everybody can get immunized. We can have herd immunity everywhere, and we’re going to wear masks for the next 300 years.” And by the way, not just one mask, two, three, four, you can’t have too many masks. How much virtue do you want to signal? This is just dumb.

The horrid cancel culture and social media were his next target. And he also went after squishy Republicans like former speaker John Boehner who, while taping the audiobook version of his latest tome, was reported as saying, “Oh, and Ted Cruz, go f— yourself.”,

“Yesterday, John Boehner made some news. He suggested that I do something that was anatomically impossible. To which my response was, “Who’s John Boehner?”

Afterward, he made the mike drop comment to cheering crowds.

And you know what? There are a whole lot of voices in Washington that want to just erase the last four years, want to go back to the world before, where we had government of the lobbyist by the lobbyists for the lobbyists, where the Republicans’ compelling message was, “Republicans, we waste less.” And they look at Donald J. Trump, and they look at the millions of millions of people inspired who went to battle fighting alongside President Trump, and they’re terrified. And they want him to go away. Let me tell you this right now, Donald J. Trump ain’t going anywhere.

Cruz defined the GOP as the middle-class party and fought back against the definition of conservatism pushed by leftists and the MSM.

(…)So what do we do? What do we do at a time where the hard left is resurgent. Two very simple things, number one, we defend liberty. Look, are there tensions in our party? Sure. Because we believe in diversity, we believe in individuality, different people have different views. We aren’t the Borg enforcing… Okay, I may have committed a cardinal sin, mixing Star Wars and Star Trek. Next thing you know, you’re going to cross the streams and the Stay Puft Marshmallow Man is going to come. Too many terrible references there. We don’t believe in uniformity. But I’ll tell you what can unite conservatives and libertarians and those who value the Constitution and the Bill of Rights is a love of liberty.

His close was a rallying point for the conservative crowd.

But already Joe Biden and the radicals in his administration, they are already overshooting. They are already going too far. Their policies don’t work. They are disasters. They are bad. They are destroying jobs. They’re stripping our freedom. And there is a natural pendulum to politics, and the country will come back to sanity. And mark my words, 2022 is going to be a fantastic election year, and so is 2024, as we stand together and defend liberty, defend the Constitution, defend the Bill of Rights of every American. In the immortal words of William Wallace, “Freedom!”

Below is a video of Cruz’s full speech:

Note: Regular readers of this site know that The Lid has covered CPAC for a dozen years. For political wonks and those of the Conservative persuasion, CPAC is the must-go-to or live stream event of the year. It is where one can learn the “whys” behind policies, the information to help one decide whether the policies are good or bad, and a place to get the scoop about happenings behind the scenes. Sadly I am not at CPAC in person this year because of family issues, but I will be live streaming and watching every second conference from home. Friday was great and the rest of the agenda looks incredible. If you want to live stream the entire conference (it’s free) as I will, or just watch Trump’s news-breaking speech on Sunday at 3;40PM, this is the link to the site where you can watch.