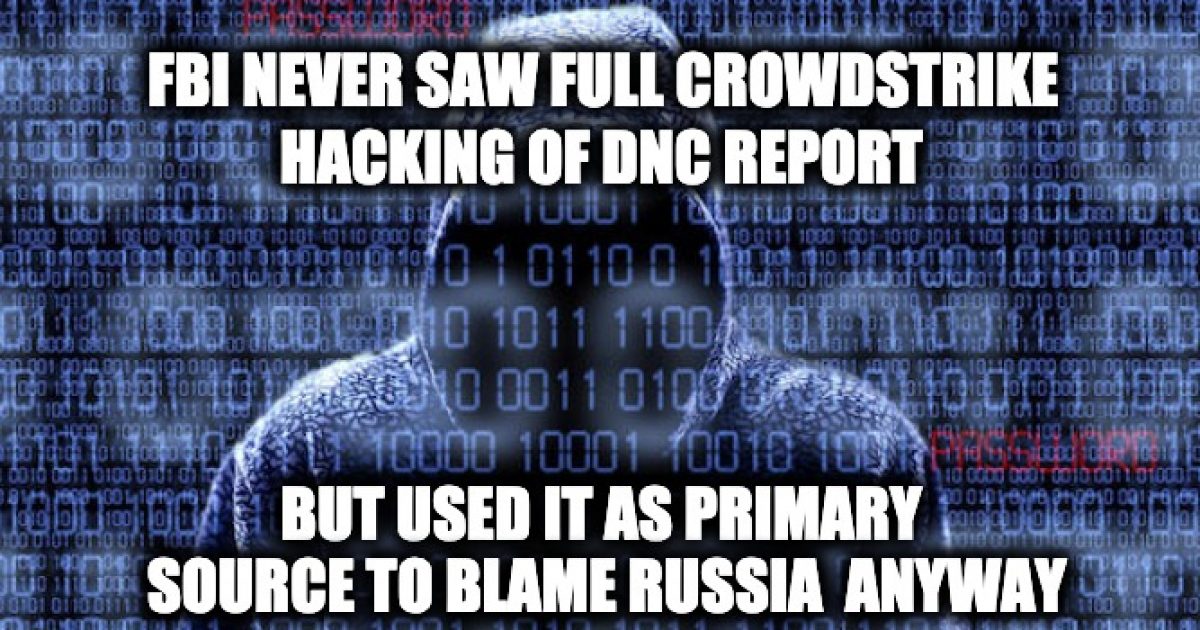 American Thinker’s Thomas Lifson highlights a significant find by Conservative Treehouse in the discovery information from the Roger Stone trial: the FBI never had a complete copy of the CrowdStrike report on the hacking of DNC server.  But if they never had the full report, why did they use it as a primary piece of evidence to blame Russia for the hacking?

It may be even worse than that.  As a refresher, the DNC server reportedly ransacked by the Russians in 2016 was never turned over to the FBI for hands-on analysis, a Russiagate Fact everyone is now familiar with.  the Bureau’s determination that it was the Russians who hacked the DNC was based instead on the report of the firm CrowdStrike, which was hired by the DNC to analyze what the heck happened

The intrusion into the DNC server has always figured as a vital pillar of the Russiagate narrative.  Skeptics have, equally, always questioned the basis for the certainty about this, given that we’ve known from the beginning the FBI never had the server in-hand; therefore they could never do its own forensic probe.

Both the FBI and the Democratic Party admitted that the crime-fighting agency based its decision to blame Russians for hacking into the DNC computers on a report commissioned by the DNC and generated by CrowdStrike. Yes, our intelligence agencies agree it was all the Russians fault. But can one trust the veracity of that determination when the FBI relied exclusively on information from a report by Crowdstrike who were being paid by the Democratic Party? Especially if they’ve never seen the entire report?

CrowdStrike may have a prejudice against Russia. In March of 2017, the  Voice of America VOA caught CrowdStrike creating a bogus and unrelated hacking charge against Russia, and making up the facts to prove its veracity. It seems that CrowdStrike is as politically motivated as everyone else in Washington, D.C.  The VOA caught Crowdstrike lying about a claim of Russian hacking damaging Ukrainian technology. There was no hacking to blame on Russia or anyone else. The company who the DNC and FBI relied upon not only made up a crime that didn’t exist, but they blamed it on Putin’s Russia. Shouldn’t that call into question Crowdstrike’s report?  At the very least that should have motivated the FBI to get a copy of the entire report about the DNC and investigate whether it was accurate?

This also raised the question as to whether the report commissioned purely for campaign purposes? Based on the fact that the company has close ties to the Obama team, is friends with Hillary Clinton, and connected to Ukrainian oligarch Victor Pinchuk (another friend of the DNC), can we really believe the report was done without DNC input? Did an entire report ever really exist. The CrowdStrike document may have been one more element of the DNC/Deep State effort to end the Trump Presidency before it started? If everything was above board—why didn’t the FBI demand to examine the DNC server or the entire CrowdStrike report?

A response from the prosecution in the Roger Stone trial confirmed that neither the DOJ nor the FBI, to this day, has a complete copy of the CrowdStrike report

With a critical omission, the response also raises the question of whether the FBI received any copy of the report before the ICA was published to the world in January 2017. According to the Department of Justice, in its response to the Stone defense asking for a copy of the CrowdStrike report, lawyers for the DNC and DCCC voluntarily, at an unspecified later time, provided redacted draft copies of the CrowdStrike report “to the government.”These questions above need to be answered,  and until they are much of America will have the same suspicion Marcellus had in the first act of Hamlet when he told Horatio “Something is rotten in the state of Denmark.”

Parts of this post was first seen at Liberty Unyielding.