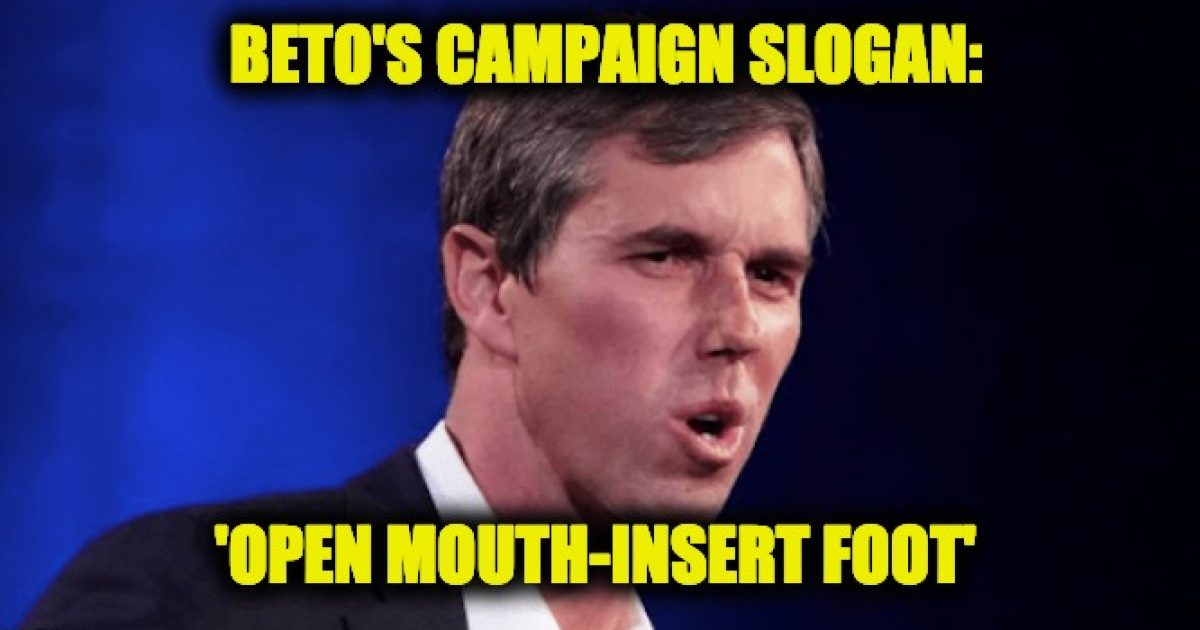 Robert Francis O’Rourke, nicknamed “Beto,” has just begun his journey through the democratic primary process, and he’s already causing the adoring progressive Democrats and his MSM fans to cringe.

First up, “Beto” announced his official candidacy just as a long and winding interview between him and Vanity Fair hit newsstands.  During the interview, the youthful candidate had whimsical words when asked why he chose to run for the Presidency, saying at one point that he was “born to” do it. That won’t play in New Jersey where they believe the liberal Bruce Springsteen was born to run. Actually, it didn’t play anywhere, the reaction from the political world was a swift one, rife with eye-rolling and plenty of cringing.

Now, just a few days later, “Beto” is back at it, giving the media plenty of cringe-worthy gaffes.

Yesterday was a day that Democratic presidential candidate Beto O’Rourke may want to forget. His first swing through Iowa as an official candidate was marred by a “joke” about his wife that drew heavy criticism and the revelation by Reuters of his membership in a hacker group as a teenager where he posted a story about kids getting run over by a car on the group’s message board.

O’Rourke was on the defensive most of the day, apologizing profusely for saying his wife Amy raised their three kids “sometimes with my help.”

Another t-file from O’Rourke, written when he was 15, is a short and disturbing piece of fiction. “One day, as I was driving home from work, I noticed two children crossing the street. They were happy, happy to be free from their troubles…. This happiness was mine by right. I had earned it in my dreams.

“As I neared the young ones, I put all my weight on my right foot, keeping the accelerator pedal on the floor until I heard the crashing of the two children on the hood, and then the sharp cry of pain from one of the two. I was so fascinated for a moment, that when after I had stopped my vehicle, I just sat in a daze, sweet visions filling my head.”

While Beto may have made quite the splash this week, he’ll have to tighten up ship if he wants to compete with the “running but not running” Joe Biden during the Democratic primaries. On the other hand, if he doesn’t tighten ship along with Biden the gaffe-meister and former SCHMOTUS, Beto will be generating tons of material for bloggers.

Much of this post was first seen at FlagandCross.com