Is Rep. Crenshaw A Future POTUS? 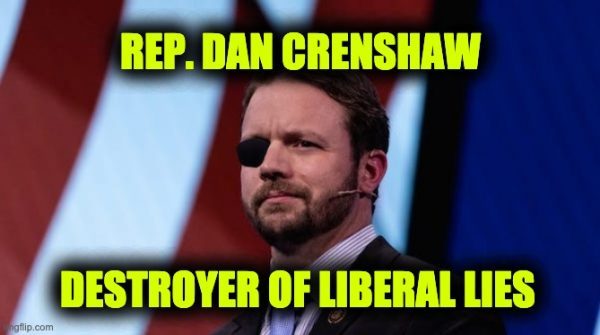 What some folks do with fiery bombast and bravado, Texas Congressman/war hero Dan Crenshaw (R) does with the straightforward, matter-of-fact presentation of facts. Crenshaw mutilates bogus talking points

He used his calm voice and demeanor to completely disarm Bill Maher’s usual mow-them-down-and-keep-going tactics. Dan never gave him the chance to play that game.

‘When people make these accusations, I have to ask them: Is the goal to make Trump look bad or is the goal to get to the truth? Because there are two separate sets of answers for that.’

OUCH! That will leave a mark.

As some of the social media observers described the encounter, Maher got ‘Rekt.’

Bill Maher gets REKT without the high production spell that is Hollywood. No phony studio audience to save him. Great job by @DanCrenshawTX. pic.twitter.com/FWBgGsYJnO

They’re right. Crenshaw put on a clinic of how to go into a hostile media site, completely undress the guy laying in ambush for you, and walk away looking like a nice guy and a class act in the process.

It’s hard seeing Rep. Dan Crenshaw (R-Texas) not running for president on day. Will do any media outlet, which stems from confidence in himself and his worldview. Possesses likability, authenticity and pragmatism. Save the tweet.

I don’t think I would object.

Never once did Crenshaw have to give up the high ground, he didn’t argue, he blinded Maher with facts.

Better still, he took the Pelosi talking points that Bill Maher was delivering on her behalf and blast them to atoms one after the other… Here’s the context… Here’s what you’re leaving out… Here’s what Trump did two days after getting that information.

Again and again, he parried the attacks. Negating them, he countered with a strike of his own.

He wasn’t done taking a razor to the Wuhan Chinese Coronavirus talking points, either.

He put out a video breaking down the timeline with such precision that, at the time of this writing, it is the President’s ‘pinned tweet,’ calling it, “Brilliant, a must watch” (in all caps).

“You need to hear this – because you’re being bombarded right now with these really over-the-top accusations against the president,” he begins:

Two weeks ago, Rep. Crenshaw fired off a brutal response to crooked Hillary after the two-time Presidential Election loser posted yet another attack on President Trump and his Coronavirus response.

For those who are not familiar with the Texas Congressman/war hero: Rep. Crenshaw retired from the Navy SEALs after 10 years of service. Even after losing his eye from an IED blast in 2012, he deployed twice more to the Middle East and South Korea. He was awarded two Bronze Stars, a Purple Heart, and the Navy Commendation Medal with Valor.