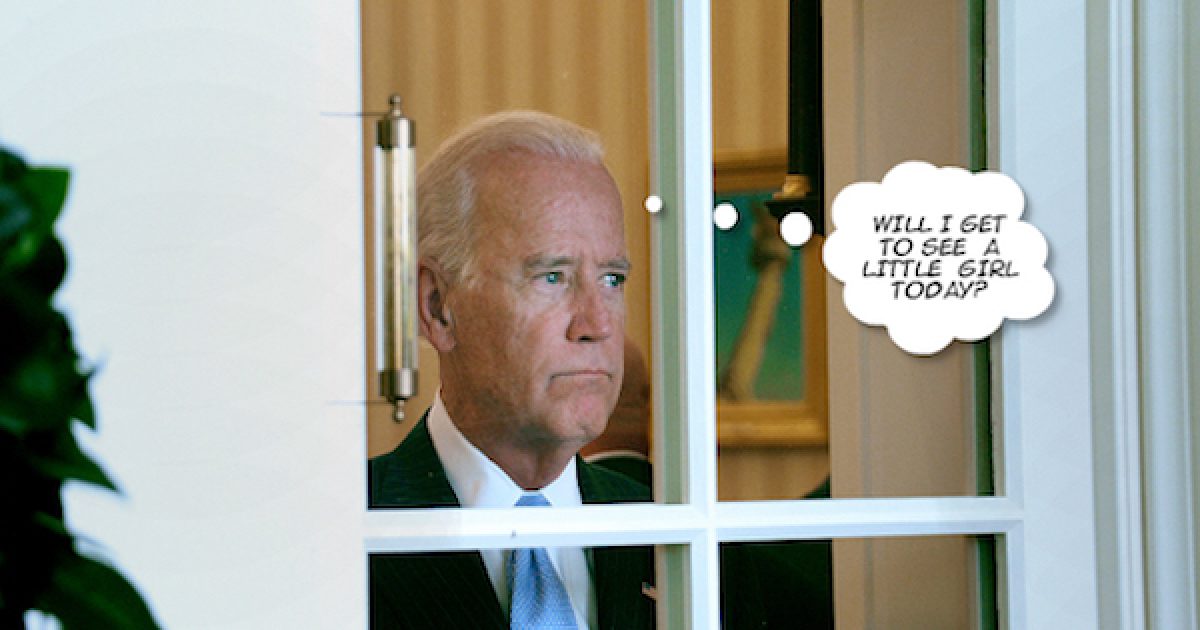 To our knowledge, former Vice President, the SCHMOTUS Joe Biden has never been formally accused of sexual harassment or molestation, but that doesn’t mean he’s not the creepiest old man in America.

Biden’s “creep factor” has been well documented and if he’s the best that the Democrat Party can do in 2020… they are in deep trouble. (Particularly, in the post-Harvey Weinstein, Brett Ratner, Al Franken, etc., age.)

Back in 2014 Robert Kessler’s Secret Service tell-all explained that while the worst detail is serving on Hillary Clinton’s protection team, protecting Joe Biden was almost as bad a job.

‘Agents say that, whether at the vice president’s residence or at his home in Delaware, Biden has a habit of swimming in his pool nude,’ Mr Kessler writes. ‘Female Secret Service agents find that offensive.’

Offensive? I am surprised they didn’t poke their own eyes out.

The naked swimming and the last-minute changes of schedule mean that being assigned to Mr Biden is seen as ‘the second worst assignment in the Secret Service,’ Mr Kessler writes.

It’s not just the swimming though. Journalist Jon Gabriel added that he’s heard Biden enjoys strolling his home in the same manner, even when the Secret Service is present.

FWIW, I heard this years ago from a Secret Service agent. Also walks around the house like that. https://t.co/j3Qh1YPwKo

But these behaviors only begin to scratch the surface of Biden’s creepy ickiness.

In this clip, former Vice President Biden uses a candid moment to fondle the chest area of a little girl — in front of her entire family. Her visible discomfort is extremely obvious. pic.twitter.com/PXZx68KEGe

If that wasn’t disturbing enough, in this clip, Biden not only touches a young woman but smells her hair, kisses her, whispering something into her ear, only to tell her “see you back home, I hope” after visibly creeping out her and who I assume is her mother. pic.twitter.com/WrFLWmAPFJ

As former VP, Biden had a habit of smelling the hair of women and (particularly) little girls. In this clip, he fixes the hair of a little girl, conveniently placing his hands near her chest area. Her and the other young girl beside her clearly seem uncomfortable by it all. pic.twitter.com/fpER7WB604

In this clip, Biden swears-in (R) Senator Jim Risch. During photographs, Biden touches Risch’s daughter, specifically asking to take a photo alone with her. You can hear Risch say “Dad’s going to stand pretty close.” (I wonder why?) Biden even jokes and says, “If I was young…” pic.twitter.com/LLqJ4guU0q

In this clip at another swearing-in ceremony, former VP Biden starts strangely sniffing the hair of a very young girl (he just met) repeatedly, also kissing on her. This man clearly has no boundaries. pic.twitter.com/MxYxEJVDRR

Biden almost always seems to immediately inquire about the age of the girls he meets during these ops. He also has a habit of creepily saying “no serious guys till you’re 31.” “Serious” guys? The way he handles young girls is discomforting to watch. You can see it on their faces. pic.twitter.com/AH0V41WiQG

In this clip, Biden grabs onto a little girl he just met, continuing to grab her with one hand as he uses his other to shake hands with those he’s being introduced to. Very awkward. He then starts stroking her face repeatedly. pic.twitter.com/NhHkuthDb6

No woman is safe from Joe Biden’s creepy disposition. Not even Hillary Clinton herself. Watch as he awkwardly embraces her for a particularly long amount of time. She keeps patting his arm as a gesture to let go, but he refuses. pic.twitter.com/u9YQilkON3

The media has even acknowledged that former Vice President Joe Biden clearly has a problem controlling his behavior around women and young girls. pic.twitter.com/kGgZfB9mst

Interestingly, it seems that former Senator (and current Attorney General) Jeff Sessions was prepared to defend the ladies’ in his life when forced into a photo op with Biden. Watch as he swats Biden’s hands away from his innocent granddaughter:

A lot of the family members involved in these awkward moments don’t know how to respond to Joe Biden preying on their young female relatives. Jeff Sessions, however, knows exactly what to do. Watch as he swats Biden’s hand from touching his granddaughter. Wonder why he’d do that? pic.twitter.com/YNw5ZHlXWP

The truth is that even our friends on the left aren’t sure about what to do with Biden’s wandering hands and creepy personality.

Biden’s behavior is so notable that even left-leaning publications have called him out:

There’s just no way that this guy can ever be President… right?