Crazy Maxine Waters May Be Running For POTUS In 2020 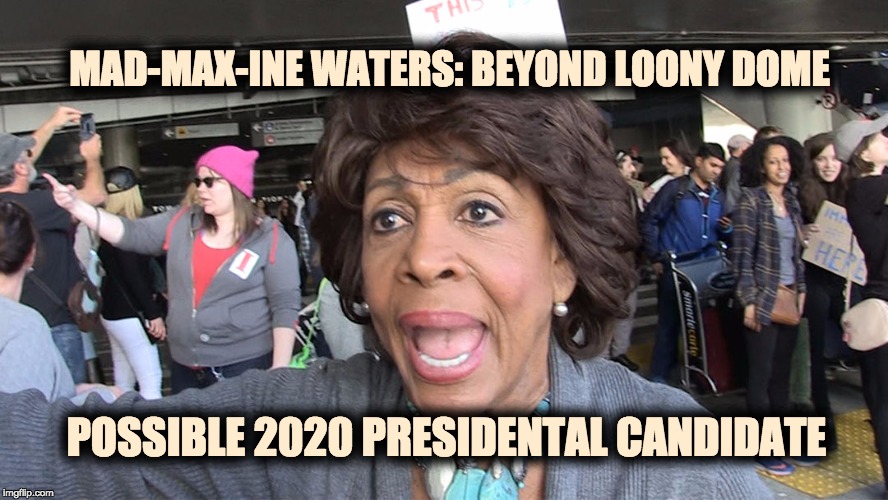 Just when you started to calm down from the 2016 election 2020 is starting to be discussed (well, some liberals who are still fighting the 2016 results). After all, it is only 930 days till the 2020 Iowa caucuses.  And look, Maxine Waters (D-CA) is visiting New Hampshire. THAT MAXINE WATERS !?!?!

That’s right, crazy Maxine, the woman who puts cuckoo in cuckoo clock, the Representative who proves each and every day that stupid & nasty is the worst possible combination for a human being, may be running for POTUS in 2020.

I know what you are thinking–I am only posting this because George Romero has died and America needs something to replace the giant of horror films, but that’s not my rationale. This is a real story.

Ever since Hillary Clinton campaign went up in flames in 2016, the Democrats have been in a state of confusion. Their only policy has been to attack each and every breath taken by President Trump.  And don’t forget that they believe that it was the Russians who made her run an arrogant campaign, while ignoring the key mid-west states. The DNC would probably tell you that Clinton’s loss had nothing to do with the fact that Americans were looking for a change candidate who would shake up things in the beltway.

Now, as the Democrats are left desperate and scrambling, the notion that they would already be preparing for 2020 goes to show that the party needs something to look forward to. We’ve already heard some names floated, such as Bernie Sanders, Elizabeth “Pocahontas” Warren and even California’s brand spanking new senator who lives to protect Planned Parenthood Kamala Harris.  Unfortunately for the Democrats, possibly joining that list may be conspiracy theorist, corrupt legislator,  and leader of the impeach Trump movement,  Maxine Waters.

“Speculation is increasing as it’s revealed the California congresswoman and darling of Trump haters nationwide will be making an appearance in the early presidential primary state of New Hampshire on Sunday.

“’According to an invitation, obtained by WMUR from Democratic sources, Waters will be in the state on July 23 for the picnic to be held at the Miller Farm in New Durham,’ WMUR reports, where she will hobnob with the Strafford County Democratic Committee.

“President Trump has been a favorite punching bag for Waters, who seems to spin a new conspiracy theory about his administration and aides every few days.

“Waters has been intentionally antagonistic towards the president’s supporters, as well.”

While many democrats claim the “resistance” title in order to appeal to their millennial constituents, Maxine Waters has been so unhinged that a squad of nice men in lab coats are getting ready to give her one of those nice rain coats with the extra-long sleeves that tie in the back.

Some may believe that Mad Max-ine’s bid for the presidency would be doomed from the get-go should remember the same thing was said about Barack Obama in 2008, and Donald Trump in 2016.

Waters has incessant need to be in front of a camera so she can spew her ridiculous accusations (remember when she was caught using tax payer cash to help her husband’s bank and first blamed it on racism?) She ranks up there with Chuck Schumer as a  Democratic politician for whom the spotlight and lying about the opposition is more important than working for the good of the country. She also happens to be “frothing at the mouth crazy.”

I think may time to schedule a long vacation for 2019, because if you believe 2016 was a crazy election you ain’t seen nothing yet! Just wait till 2020.