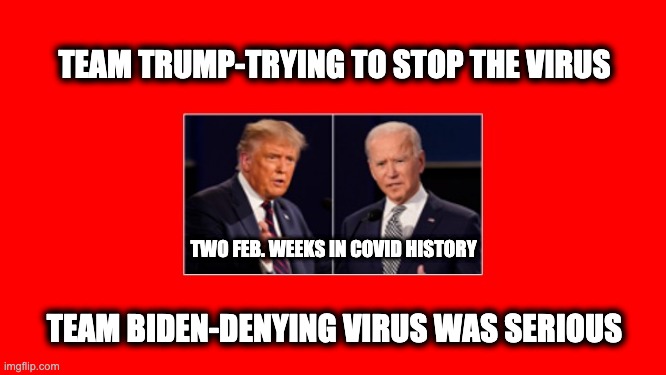 After ten months of the COVID-19 virus, Democrats and their sycophants in the mainstream media were able to defeat Donald Trump. Much of their campaign included the lie that the Trump Administration never took the virus seriously. We already explained that the Trump team took immediate action on the virus during the last nine days of January 2020, and during the same time period Joe Biden and his team punted. In this post, we demonstrate that as the pandemic worsened during the first few days of February, President Trump’s team continue to act while the future President Biden and his re-Bama team misled the public about the dangers of COVID and criticized Trump. Covid history.

We don’t have a #COVIDー19 epidemic in the US but we are starting to see a fear epidemic. Kudos to @NYCMayor (and others) for standing against that. https://t.co/mULErCXKsH

On Valentine’s day 2020, the pandemic was still just getting started in the United States.  Despite that the spread of the China virus in this country was very limited, the Trump team took the virus seriously and initiated decisive action in an attempt to fight its spread. They already instituted the China Travel ban, began public health entry screening at the 3 U.S. airports that receive travelers from Wuhan, received emergency authorization for the first COVID test, formed the Coronavirus task force led by VP Pence, declared the CoronaVirus a public health emergency, and much more.

Simultaneously now-President Joe Biden was criticizing Trump’s China travel ban, a member of his COVID advisory panel was telling people the chance of dying from COVID was negligible and his closest aide his future WH Chief of Staff was telling people the evidence suggests the virus will not be serious and they should go to Chinatown.

The purpose of this post is to expose the truth of what happened during the first year of the Corona Virus pandemic. This post proves that America was fed a load of crap by Lyin Joe Biden as well as his sycophants in the media.  Look for more of this story in the coming weeks.