"There Are Many Labs Inside Of China, Martha. This Risk Remains." 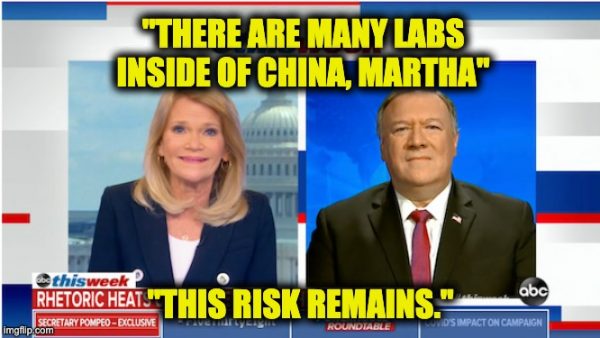 Secretary of State Pompeo was interviewed on ABC’s This Week and said there’s “enormous evidence” exists indicating the coronavirus pandemic began in a lab in Wuhan and added China and that the ruling Communist Party did everything it could to keep the outbreak under wraps. Something we all suspected but it is nice to have confirmed from someone high-up in the administration. Covid came from Wuhan lab

Martha Raddatz: And Mr. Secretary, have you seen anything that gives you high confidence that it originated in that Wuhan lab?

SECRETARY POMPEO:  Martha, there is enormous evidence that that’s where this began.  We’ve said from the beginning that this was a virus that originated in Wuhan, China.  We took a lot of grief for that from the outside, but I think the whole world can see now.

But wait a second. When President Trump says that the liberal media craps all over him, they say he’s just trying to shift the blame. Pompeo continued:

Remember, China has a history of infecting the world and they have a history of running substandard laboratories.  These are not the first times that we’ve had a world exposed to viruses as a result of failures in a Chinese lab.

And so while the Intelligence Community continues to do its work, they should continue to do that and verify so that we are certain, I can tell you that there is a significant amount of evidence that this came from that laboratory in Wuhan.

The Secretary Of State said the Chinese government’s response was a classic commie disinformation effort. Not very diplomatic but 100% true.

We can confirm that the Chinese Communist Party did all that it could to make sure that the world didn’t learn in a timely fashion about what was taking place.  There’s lots of evidence of that.  Some of it you can see in public, right?  We’ve seen announcements.  We’ve seen the fact that they kicked journalists out.  We saw the fact that those who were trying to report on this – medical professionals inside of China – were silenced.  They shut down reporting.  All the kind of things that authoritarian regimes do.  It’s the way the Communist Party has operated.  This is classic communist disinformation effort.

Pompeo get’s a bit confusing when asked if Covid-19 was man-made.

Martha Raddatz: Do you believe it was man-made or genetically modified?

SECRETARY POMPEO:  Look, the best experts so far seem to think it was man-made.  I have no reason to disbelieve that at this point.

Martha Raddatz: Your Office of the DNI says the consensus, the scientific consensus, was not man-made or genetically modified.

SECRETARY POMPEO:  That’s right.  I agree with that.  Yeah, I’ve seen their analysis.  I’ve seen the summary that you saw that was released publicly.  I have no reason to doubt that that is accurate at this point.

I’ve seen what the Intelligence Community has said.  I have no reason to believe that they’ve got it wrong.  But you have to put this in context.  Here’s what’s important, Martha.  Here’s what’s important.  The Chinese Communist Party had the opportunity to prevent all of the calamity that has befallen the world, and here we find ourselves today – you and I were talking about we haven’t seen each other physically for a long time.  That’s true of people all across the world.

This is an enormous crisis created by the fact that the Chinese Communist Party reverted to form, reverted to the kinds of disinformation, the kinds of concealment, that authoritarian regimes do.  Had those scientists been operating in America, they would have put this out, there would have been the exchange of ideas, and we would have quickly identified the kinds of things that needed to be done in response.

Instead, China behaved like authoritarian regimes do.  It attempted to conceal and hide and confuse.  It employed the World Health Organization as a tool to do the same.  These are the kind of things that have now presented this enormous crisis, an enormous loss of life, and tremendous economic cost all across the globe.  The Australians agree with that.  You hear the Europeans beginning to say the same thing.  I think the whole world is united in understanding that China brought this virus to the world.

Martha had to ask again:

Martha Raddatz: And just very quickly, if we can, Mr. Secretary – we’re running out of time – do you think they intentionally released that virus, or it was an accident in the lab?

SECRETARY POMPEO::  I don’t have anything to say about that.  I think there’s a lot to know.  But I can say this:  We’ve done our best to try and answer all of those questions.  We tried to get a team in there.  The World Health Organization tried to get a team in there.  And they have failed.  No one has been allowed to go to this lab or any of the other laboratories.  There are many labs inside of China, Martha.

This risk remains.  This is an ongoing challenge.  We still need to get in there.  We still don’t have the virus samples we need.  This is an ongoing threat, an ongoing pandemic, and the Chinese Communist Party continues to block access to the Western world, the world’s best scientists, to figure out exactly what happened.  So I can’t answer your question about that because the Chinese Communist Party has refused to cooperate with world health experts.

Try to sleep with what Pompeo said in his last answer, “There are many labs inside of China, Martha. This risk remains.”

Now that is frightening. But in the end, risk or not the MSM will find a way to blame President Trump whatever he does.

A video of the full interview follows: