Dumb And Dumberer: CNN And MSNBC Coverage of Smollett Verdict 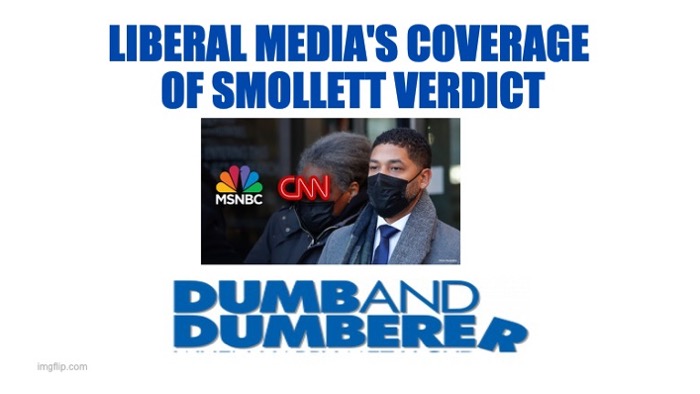 Look, no one expected the MSM to apologize for drawing conclusions about the Jussie Smollett in January 2019 when the supposed attack happened. Heck, we’re still waiting for them to apologize for believing the Russiagate hoax.  But to be honest,  a wealthy TV star who desires to get a sandwich from the local Subway at  2AM is a bit odd. That he decided to walk to the subway when the temperature was -16 degrees should have raised questions. Instead, they bought his pile of bull crap without asking any questions. After all, it was the perfect liberal media story— a victim who was both gay and black attacked by two white racists who supported Donald Trump. If Smollett didn’t make it up, someone in the liberal media would have. coverage of Smollett verdict

Now that a jury has convicted Smollett for making up the attack, the post-verdict reaction of the liberal mainstream media is just as stupid as the Smollett defense’s decision to have their client testify at the trial.  Their post-verdict coverage downplayed the Smollett conviction and beat up conservatives.

As reported by Fox News, CNN’s website said, “Jussie Smollett guilty on some charges.” SOME? He was found guilty on five out of six charges. That’s 83%, not some.    Meatloaf used to sing a song called, “Two out of three ain’t bad.” If two out of three ain’t bad, for the prosecution, five out of six isn’t some and has to be even better than “ain’t bad.” 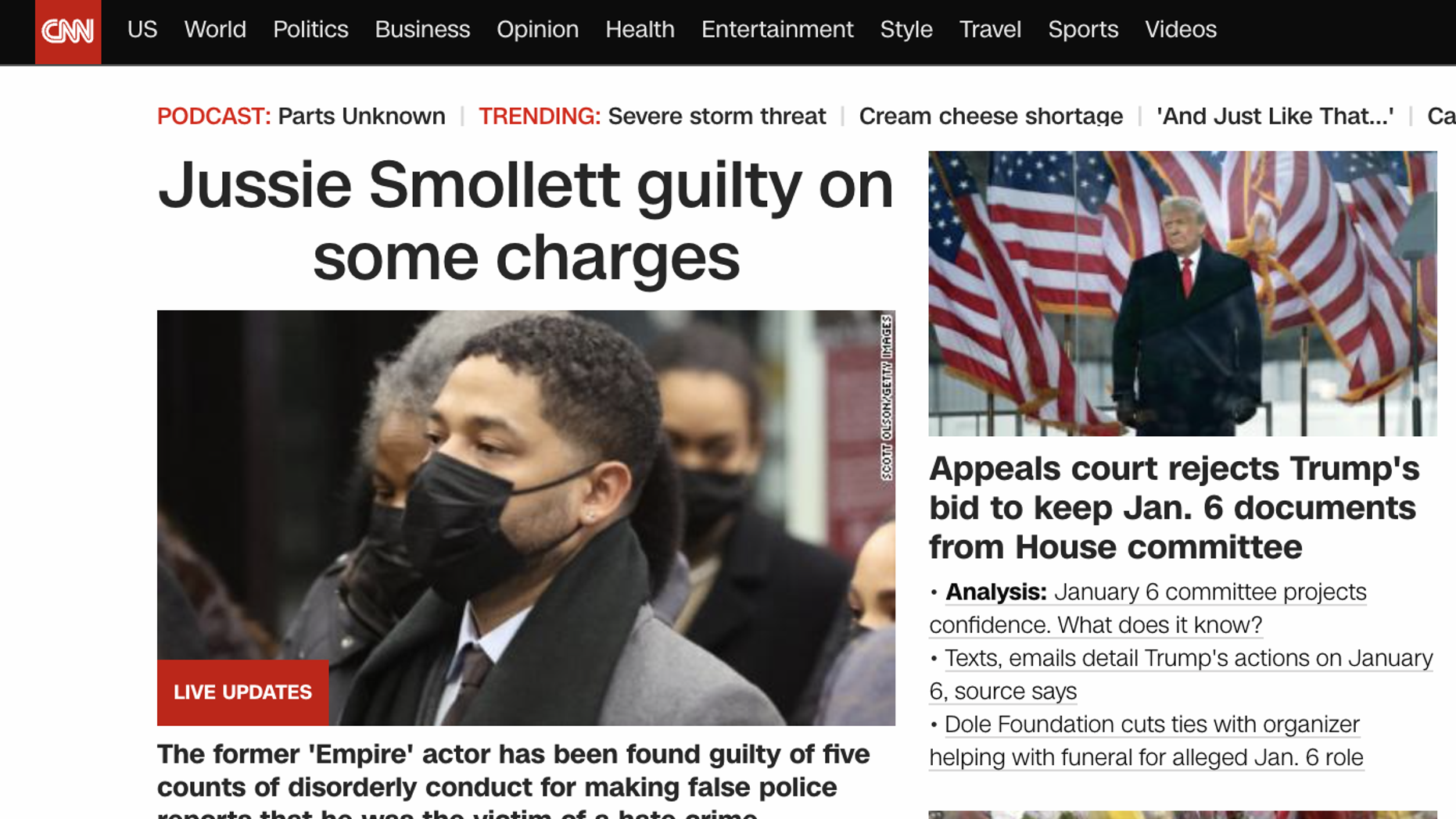 The CNN media critic Humpty Dumpty bashed conservatives for bashing the people who bought the Smollett lies and declared conservatives were all racist from day one.  On his daily newsletter (which is not called falling off a wall), Humpty Stelter bashed the conservative media that criticized the liberal media that never investigated the hoax and was fooled by Smollet, lock stock, and barrel.

MSNBC, which never fails to be stupid when covering a story damaging to a liberal, did not disappoint.

I can understand why Brian Williams skipped the story as he lied to America much more than Jussie ever did.

The lack of MSNBC coverage was a disservice to their nightly audience of 15-20 viewers. These viewers tend to be so gullible that they believe the two tons of baloney the network feeds them every day.

To be fair, perhaps Rachel Maddow didn’t cover the story because it didn’t include a copy of a fake Donald Trump tax return. Maybe Joy Reid didn’t comment because Jussie is gay, and she is a homophobe.

On its website, however, commentator Zach Stafford claimed the “Jussie Smollett guilty verdict will be used by Trump supporters to prove Democrats wrongly label them villains.” It seems that the MSNBC website readers are just as gullible as the TV viewers. This purveyor of fictional stereotypes added, “It doesn’t matter if the actor, who starred on “Empire,” really was beaten up by people yelling “This is MAGA country!” and is wrongly being punished or if he did stage an elaborate hoax, as the jury decided he did by finding him guilty of five counts of disorderly conduct.”

Hey, Zach, here’s a little secret, whatever you think of MAGA supporters, they aren’t stupid enough to hang out on the streets of Chicago at 2AM on a frigid night, Mr. Stafford went on to write:

Instead, the seemingly never-ending questions over the almost three years regarding the truthfulness of his account means the indisputable victims of hate crimes will now carry an even heavier burden of suspicion.

So Zach is saying that even if they believed that Jussie’s story was as false as Joy Reid’s claim that she didn’t write the hateful statements in her blog, they should have voted not guilty. If it does make a heavier burden of proof for real victims, it’s Jussie Smollett’s fault. But Zach’s far-left zombies did read that their guy found a winner in the Jussie mess,

The only winners found as the dust settles are the members of the right who have declared themselves America’s real victims of hate and discrimination — people who have strategically made the Smollett case their go-to example for how the left operates and how it wrongly makes villains out of Donald Trump supporters.

Oh gee, what Is said above was wrong. Stafford was trying to tell his readers that the Smollett jury should have found the hoaxer not guilty because people have been secretly planning to use the verdict to show how the left has been telling stories about Trump voters. Putting aside the fact that the left has been telling lies about Trump even though they never talked to them. But there is a secret Trump lobby that knew the verdict in advance and strategically planned the reaction.

DAMN!! That is really upsetting! I never got any of the secret money that the left claimed the Koch brothers gave conservatives. No one ever invited me to a meeting of the WWJC (worldwide Jewish conspiracy), and now there was a secret cabal of Trump supporters who knew the Smallett verdict before it happened. I voted for Trump twice. How come no one told me. I could have written something up, ready to be posted the second the guilty verdicts were announced.

Thanks to the Dumb and Dumberer coverage of the Smollett verdict by CNN and MSNBC, I’m really depressed. They might throw bullcrap at America, but they don’t include me. None of those evil cabals like me enough to invite me to participate in their plots.