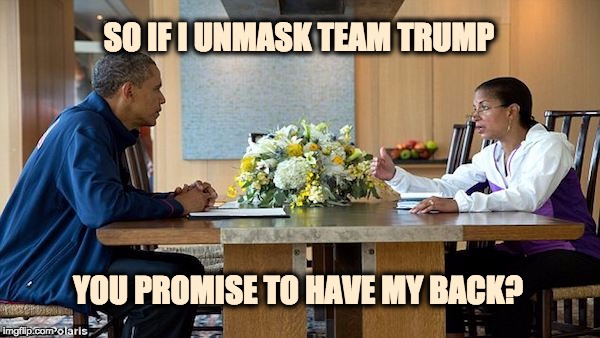 While former President Barack Obama has been out of office for well over 6 months, his influence on Washington D.C. remains reprehensibly intact.

When it was announced that the Obama family would be staying in the beltway area after their patriarch’s disastrous stint in the Oval Office, a great many republicans rolled their eyes, believing that Obama was sticking around due to an anticipated job with the democrats’ inevitable Hillary Clinton Presidency.

Then, when that was ultimately foiled by the nation’s conservative uprising, the former President went about hiring a 12-man team of Washington insiders to “keep tabs” on the newly-minted President.  This further infuriated the right, who rightfully view Obama as a meddling nuisance hoping to trip up the Trump machine.

Now, as we discover that even more sinister attempts to thwart Trump were at hand, namely in the case of Susan Rice’s unmasking of the Trump transition team to Obama and the democrats, those seeking political justice have been truly incensed.  As true Americans attempt to discover the truth behind the Rice incident, they have again been thwarted by the dastardly Obama.

“Judicial Watch today announced that the National Security Council (NSC) on May 23, 2017, informed it by letter that the materials regarding the unmasking by Obama National Security Advisor Susan Rice of ‘the identities of any U.S. citizens associated with the Trump presidential campaign or transition team’ have been removed to the Obama Library.

“The NSC will not fulfill an April 4 Judicial Watch request for records regarding information relating to people ‘who were identified pursuant to intelligence collection activities.’

“The agency also informed Judicial Watch that it would not turn over communications with any Intelligence Community member or agency concerning the alleged Russian involvement in the 2016 presidential election; the hacking of DNC computers; or the suspected communications between Russia and Trump campaign/transition officials. Specifically, the NSC told Judicial Watch:

The continued pestering of the democratic party into Trump’s presidency has gone far beyond politics as usual, with a disgusting undertone of violence and acceptance of violence against the current administration.

And as he did during his eight years as president, Barack Obama is doing his best to cover up the truth, but Judicial Watch isn’t giving up: