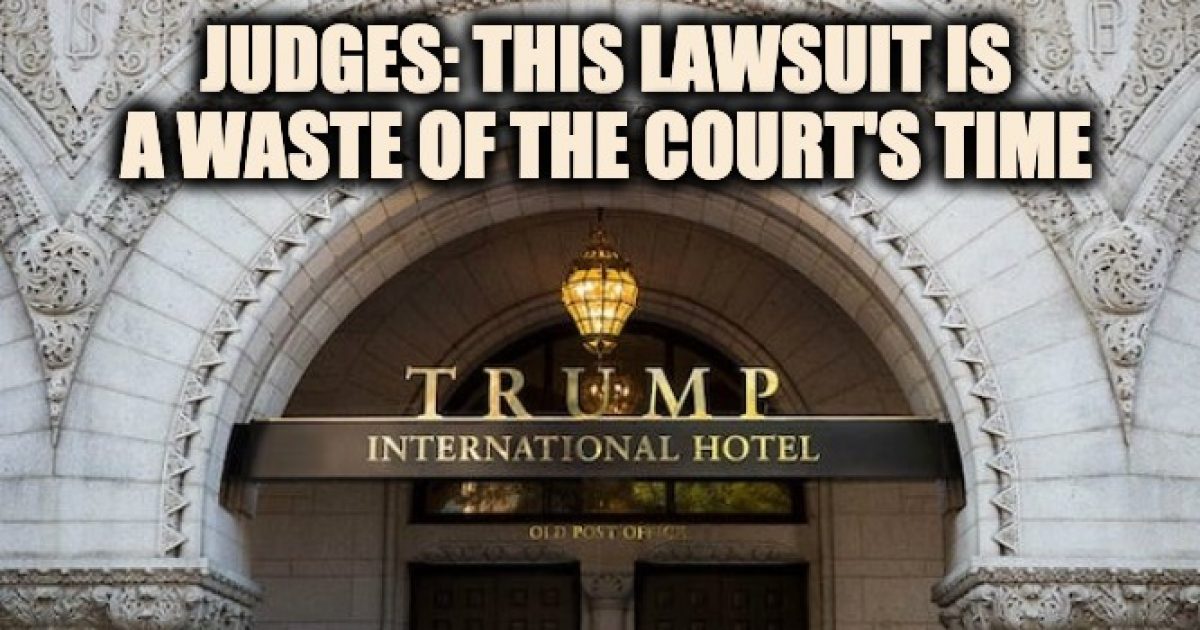 In a Yuge win for President Trump, a Federal Appeals Court dismissed a lawsuit on Wednesday that DC and Maryland Attorneys General filed, by ruling that they did not have standing to file a lawsuit charging that President Trump had violated the emoluments clause of the Constitution. They dismissed it with prejudice, which means they cannot refile the lawsuit.

Democrats in DC and Maryland thought they had the perfect way to not just harass the President, but get him removed from office. In 2017, they filed a lawsuit charging that the Trump International Hotel had foreign guests, which made Trump vulnerable to corruption because he did not disengage from the hotel. The three-judge panel 4th District Appeals Court dismissed the suit in a unanimous ruling.

The ruling stated, according to The Hill: “Indeed, there is a distinct possibility — which was completely ignored by the District and Maryland, as well as by the district court — that certain government officials might avoid patronizing the Hotel because of the President’s association with it …And, even if government officials were patronizing the Hotel to curry the President’s favor, there is no reason to conclude that they would cease doing so were the President enjoined from receiving income from the Hotel. After all, the Hotel would still be publicly associated with the President, would still bear his name, and would still financially benefit members of his family…

To allow such a suit to go forward in the district court without a resolution of the controlling issues by a court of appeals could result in an unnecessary intrusion into the duties and affairs of a sitting President.” Judge Paul Niemeyer

The Appeals court dismissed the lawsuit, saying that it seemed an “inappropriate use of the courts,” which is judge-talk for “it’s a waste of our freaking time.”

The Richmond, Virginia-based 4th U.S. Circuit Court of Appeals issued a set of decisions instructing a lower court judge to dismiss the lawsuit filed against the Republican president in June 2017 by the Democratic attorneys general of Maryland and the District of Columbia.

The court said the District of Columbia and Maryland’s interest “in enforcing the Emoluments Clauses is so attenuated and abstract that their prosecution of this case readily provokes the question of whether this action against the President is an appropriate use of the courts, which were created to resolve real cases and controversies.”

Translation: The court felt that the lawsuit filed by the Attorneys General was likely done for the purposes of harassment rather than real issues (gee whiz, really?). There is another emoluments lawsuit filed by 200 Democrats that seeks to force Trump to get permission from Congress before any financial benefits are released from other nations. That lawsuit will now have an uphill battle.

Obviously, the president was pleased as he should be as it was a BS lawsuit.

….serving and doing a great job as your President (including accepting Zero salary!).

Judging by his history and his inability to focus on anything except trashing the president I wouldn’t be surprised if Jerrold Nadler added this case to his list of summer re-run hearings. I wonder if he will subpoena the Judges?