Sen. Spartacus Booker: ‘It Would Be Irresponsible’ Not to Consider POTUS Run 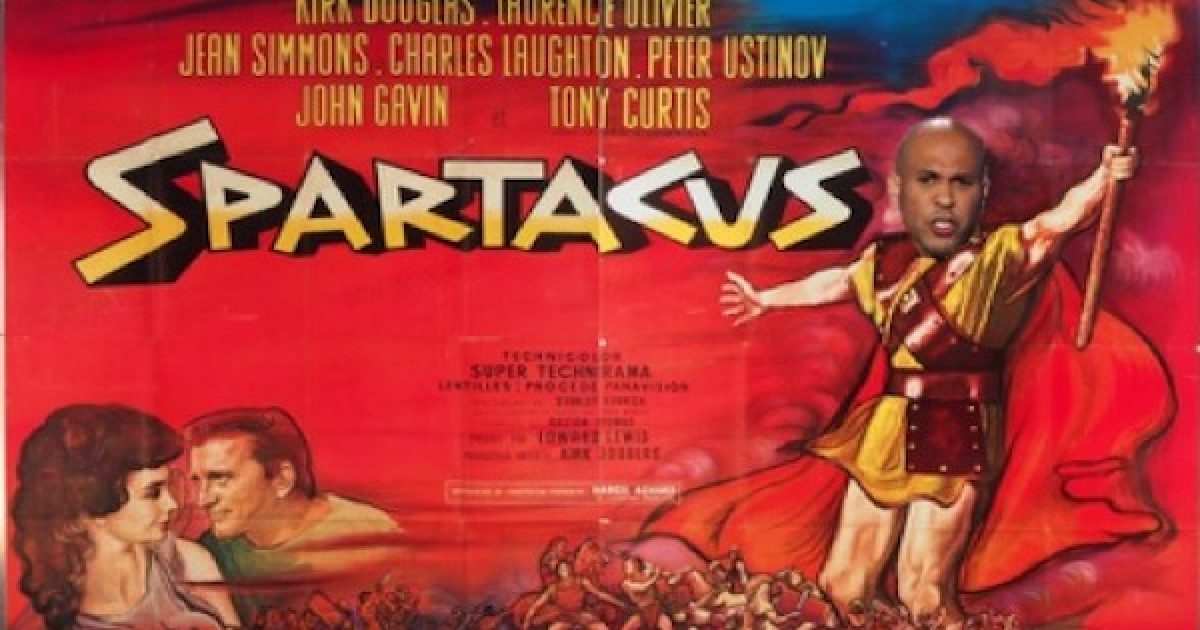 Senator “Spartacus”  Cory Booker of New Jersey seemed to confirm suspicions of a 2020 presidential run telling New York Magazine it would be “irresponsible not to” at least consider challenging President Trump.

After telling the interviewer that John McCain once told him he would one day be a statesman [strike one] Booker the article continued:

Booker, also as McCain did, very much wants to be president: “Of course the presidency will be something I consider. It would be irresponsible not to.” And there’s a lot about Booker to suggest he would be a strong contender in the 2020 primaries and a formidable contrast to Trump. He is a popular national figure with an Obama-like trajectory: a community organizer who served for years in local politics before becoming a senator in his mid-40s. He is also, like Obama, a black politician who talks with optimism and empathy about the country’s racial divide.

Cory Booker: ‘It Would Be Irresponsible Not’ to Consider Presidential Run https://t.co/uOupYwSRNs via @JackRCrowe pic.twitter.com/BmYrOrV33n

Sen. Cory Booker (D., N.J.) said in an interview published Wednesday that it would be “irresponsible” for him to not consider a presidential run in 2020.

“Of course the presidency will be something I consider. It would be irresponsible not to,” Booker told New York Magazine.

The lawmaker has become known for his attention-grabbing antics at Senate hearings, such as berating Homeland Security Secretary Kirstjen Nielsen over alleged racist remarks President Donald Trump made about African countries or declaring he was having an “I am Spartacus” moment during Brett Kavanaugh’s Supreme Court confirmation battle.

A tireless campaigner, he is a sought-after voice by liberal Democrats around the country running for office in 2018.

Booker is one of numerous Democrats rumored to be or publicly mulling a White House bid to challenge Trump, many of them also in the U.S. Senate.

The reaction on Twitter was great, conservatives were telling Cory Booker to run. Not only will it guarantee a trump win, but it will be funny, at least the reaction was funny.

CORY “SPARTACUS” BOOKER says it would be irresponsible for him not to consider a presidential run in 2020 – Trump is so delighted to hear, that he probably went to the golf course & shot a 64 for a round – Booker is no more than a 2-bit showman, who belongs working in the circus!

Oh please! Please, Cory! Bring fun back to The Race for President! https://t.co/qolSjCDQFK

PLEASE Run! @CoryBooker we need the laugh. T-bone can be your VP pic.twitter.com/N1BxLKuReR

“Everyone will Perish! I AM SPARTICUS!!!!” By the way this picture is of him berating a woman pic.twitter.com/JhIOVgQdM0

“I slowly reached for her breast. After having my hand pushed away once, I reached my mark.” (Sexual assault)

“I’ve got to find a way to snatch that snatch. The best thing for that girl would be to be tied down and screwed.” (Rape)

Well if it doesn’t work, perhaps he can star in another sequel to Spartacus.