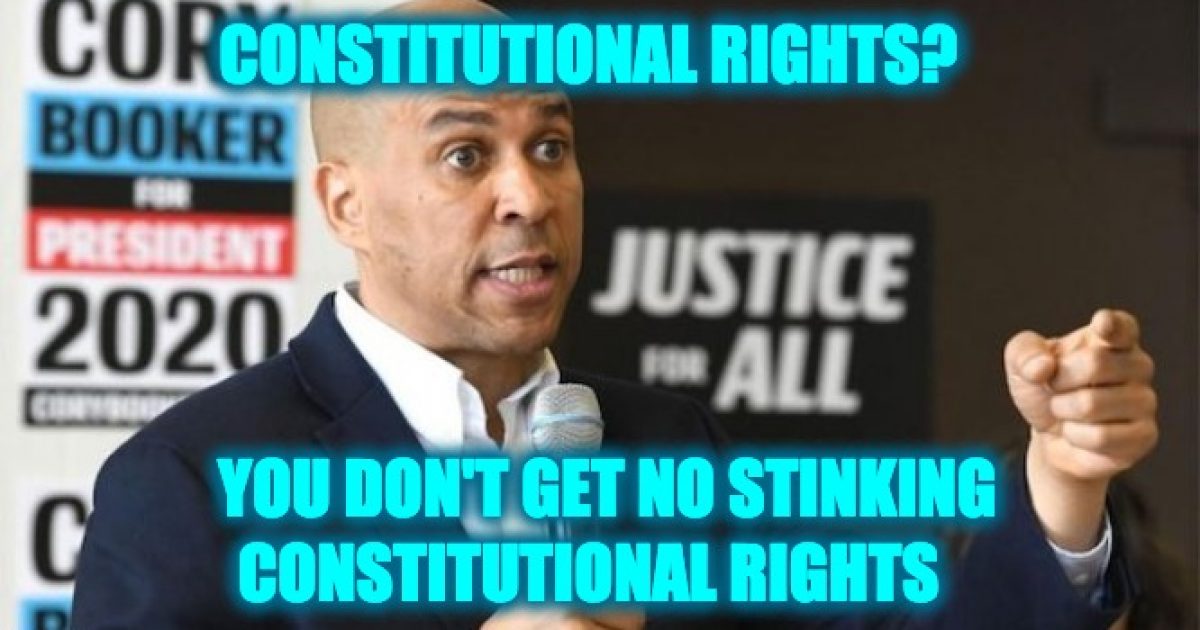 Democrats love government intrusion into everyone’s life…except their own of course. 2020 Dem candidate Senator Cory Booker has brought a new one for Democrats to rally around: all gun owners and purchasers must be federally licensed. He made the statement on Monday in a desperate attempt to put himself out front in a crowded field. It was his 2nd major platform agenda since becoming a candidate.

According to Booker’s plan, current and first-time firearms buyers would seek a license at a designated office, similar to obtaining a passport. The applications would then be verified by the FBI. Current gun owners would have a transition period to obtain a federal license.

He thinks that his plan is the most comprehensive out there to stop gun violence. Actually, it would create a snarl in the Federal government. Right now there are 13 states, plus the District of Columbia, with a license requirement. Add that requirement to all 50 states plus others, and you get a nightmare…no, a quagmire of regulations. And with the number of legal gun owners in America…he’s genuinely barking up the wrong tree.

His plan also calls for many of the things that other Democrats have proposed: universal background checks for gun buyers (which is actually meant to counteract loopholes that don’t exist); the reinstitution of a ban on assault weapons and high-capacity firearm magazines – in short, Cory Booker as president would bring a gigantic destruction of our rights.

“I am sick and tired of hearing thoughts and prayers for the communities that have been shattered by gun violence — it is time for bold action.” Senator Booker

We’re sick and tired too… of listening to the agendas of those who wish to destroy the Second Amendment.

“Just when you think the 2020 field could not get anymore out there, Cory Booker comes in with a plan to use executive action filled with new restrictions and permits on law-abiding gun-owners. Votes across the country will see this as another big government grab on our constitutional rights.” Mandi Merritt, RNC spokesperson

Ridiculous analogy: The funny thing is, Sen Booker has no concept of what he was trying to say – it’s typical of liberals who use ridiculous apples and oranges analogies to push their case. He said, according to the Washington Examiner, “You need a license to drive a car, you should need one to own a gun.”

“The examples are numerous. There are no requirements for car owners to get licensed or registered at the federal level, but Booker is proposing moving to federal licensing for guns. People are allowed to drive a car without a license on their own private property, but Booker wouldn’t allow unlicensed gun owners to purchase guns for their own self-defense or sporting use on their own property. A person can obtain a driver’s license by passing an easy test, and it typically can’t be revoked for misconduct that does not involve driving, whereas Booker wants to require strict FBI background checks and to expand the categories of people whose gun rights could be stripped away by government. Driver’s licenses issued in one state are recognized by all others, and there aren’t restrictions in driving one’s car to another state, but that is not the case with guns. Also, there is no waiting period to purchase a car, as there is with a gun.”