Fighting The Corrupt Obama Cronies Lies About The McCabe Firing 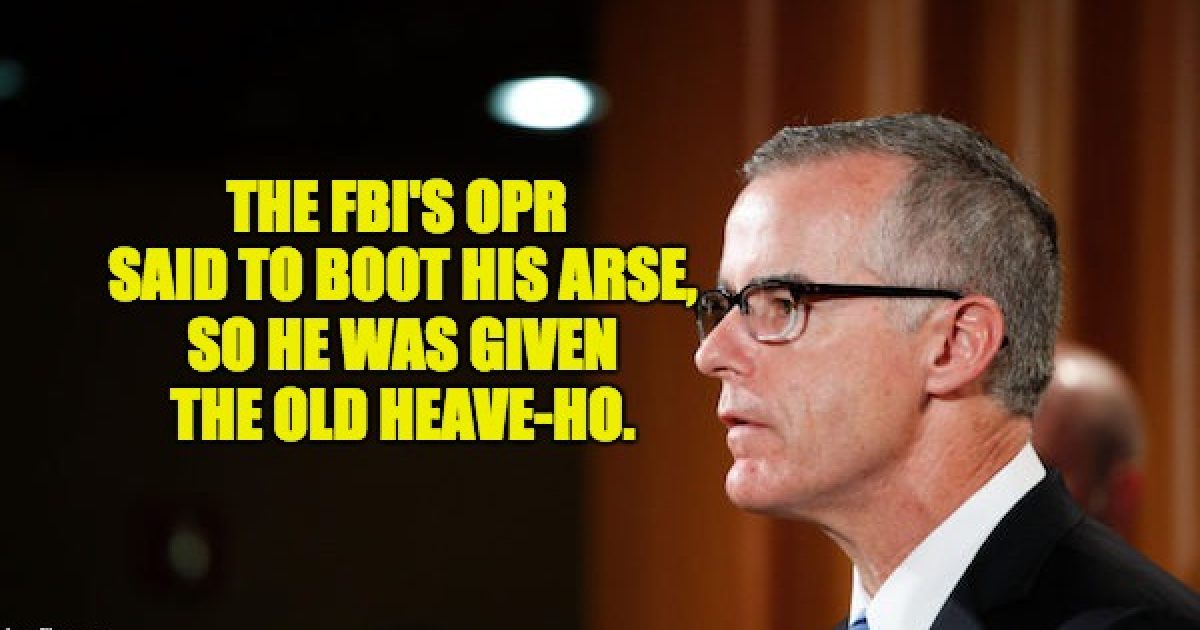 Let’s get one thing perfectly clear – the Andrew McCabe firing wasn’t political.  It was based on a report by the nonpartisan Office of the Inspector General (OIG) and the firing was recommended by the Office of Professional Responsibility, which is the ethics office of the FBI, the agency where McCabe worked. But that didn’t stop some Obama leftovers from spinning the firing into a political move manipulated by the Presiden.

McCabe was set to retire (with a full pension and other benefits) on Saturday but learned on Friday that he would instead be fired, receiving a pension but before earning thousands more in retirement benefits from the American people.

McCabe was forced out of the FBI earlier this year amid an internal investigation by the Office of the Inspector General (OIG) into his approval of unauthorized disclosures to the media in October 2016 related to the bureau’s Hillary Clinton email probe.

The Department of Justice (DOJ) inspector general Michael Horowitz reportedly concluded in a report that McCabe was not forthcoming during the OIG review. The FBI Office of Professional Responsibility (OPR) subsequently recommended that Attorney General Jeff Sessions fire McCabe, according to The New York Times…

Sessions said in a statement Friday that “both the OIG and FBI OPR reports concluded that Mr. McCabe had made an unauthorized disclosure to the news med and lacked candor — including under oath — on multiple occasions.”

He continued: “Pursuant to Department Order 1202, and based on the report of the Inspector General, the findings of the FBI’s Office of Personal Responsibility, and the recommendation of the Department’s senior career official, I have terminated the employment of Andrew McCabe effective immediately.”

Senator Lindsey Graham (R-SC), who is not necessarily President Trump’s biggest fan, reminded the nation of this fact when he went on CNN with Jake Tapper.

Let me be really clear about this.

What Mr. McCabe did has absolutely nothing to do with the Mueller investigation. The dossier, I think, was mishandled by the FBI. I think it was inappropriately used and presented to the FISA court.

That’s a separate issue than the Mueller investigation of the Trump Organization regarding Russia. They’re separate in time. They’re not connected in any way.

It is really important for mainstream journalists to tell this story accurately. Andrew McCabe was under investigation before Trump was even taking office. The Office of Professional Ethics found that he was in need of being fired.

Yes, he was involved in quite a few leaks during the Trump administration, and I think Trump takes that quite personally, but this is separate from that.

This is about the FBI… saying this guy should be fired.

.@MZHemingway: “Andrew McCabe was under investigation before @realDonaldTrump was even taking office.” pic.twitter.com/ctVamlmcso

Liberal constitutional lawyer and esteemed law professor, Jonathan Turley, had more to say about the problematic defense of McCabe. Specifically, he explained how McCabe’s failure could eventually bring down his former boss, James Comey.

Turley was on CNN, speaking with Michael Smerconish when he first made it clear that the decision to fire McCabe most likely had nothing to do with politics.

Well, what is justified in the sense that these were career officials at the office on of professional responsibility that made this recommendation which is exceedingly rare. In fact, it is unprecedented for someone in this position. These are not political appointees. The OPR, quite frankly, is not viewed as a particularly aggressive office, so all of that makes this a relatively rare sanction coming from career officers. They clearly concluded that McCabe misled them, and that he misled them on one of the core issues they were investigating, not a collateral issue.

Turley also notes the hypocrisy of the Democrats who are crying about McCabe’s firing.

What is going to create an issue going forward is whether there will be a criminal referral. Michael Flynn was indicted for making a false statement to investigators. Now, it is true that they were looking at him for other crimes as well. But there will be some that will argue why would you indict Michael Flynn but an Deputy FBI Director is just worried about his pension, not prison.

Later, Turley turns to the issue of why McCabe was fired and why it could lead to more trouble for Comey.

When Smerconish asks Turley to explain what the worst thing in this situation is, Turley is quick to throw McCabe under the bus.

Michael Smerconish: So which is the greater infraction? And I think you’re getting to this now. If in fact it occurred the way the Inspector General says it took place, which Mr. McCabe I understand disputes, but insofar as he, a, authorized members of the FBI to speak to the “Wall Street Journal,” then, b, if he was untruthful about it under oath, for which of those does he face more exposure?

Jonathan Turley: It’s the alleged false statement. As you know, there is a great deal of background discussion that occurs with reporters from the FBI and the DOJ. It is always the misrepresentation. Keep in mind with Michael Flynn, his meeting with the Russians wasn’t in any way illegal or unprecedented. It was failing to tell them about sanctions being discussed at the meeting that led to his charge. But this could easily spin further out of control. There was one line in McCabe’s statement last night that I immediately flagged because he said that he had authority to do this and he conferred with the director. The director at that time was James Comey. Now the problem here is that James Comey said under oath that he never leaked information and never approved a leak. So if the Inspector General believes this was a leak to the media, it raises serious questions about Comey’s previous testimony and could get him into serious trouble.

To a normal person, it might seem that all of these facts, stacked one atop the other, clearly seem to indicate that the Trump administration was simply following protocol with the decision to fire McCabe, but the Obama era lackeys can’t seem to grasp why breaking our laws is such a big deal.

When the full extent of your venality, moral turpitude, and political corruption becomes known, you will take your rightful place as a disgraced demagogue in the dustbin of history. You may scapegoat Andy McCabe, but you will not destroy America…America will triumph over you. https://t.co/uKppoDbduj

Brennan’s tweet was especially ironic as McCabe was fired for not being honest in his testimony and Brennan was caught lying to the Senate and the American people but received no punishment. As reported by the liberal British paper, The Guardian, in 2014;

Lest we forget, Brennan’s most recent false statement is not his first James Clapper-esque experiment in misinformation. The nation’s top spy is, in fact, a proficient and skilled liar( ….) It’s far past time for the Obama administration to bring a little accountability to the intelligence community. It’s time for Barack Obama to fire John Brennan.

Again, the problem with Brennan’s defense of McCabe is that it flies in the face of the facts on hand. I feel it necessary to bring up this line from the Business Insider report on McCabe’s firing:

The Department of Justice (DOJ) inspector general Michael Horowitz reportedly concluded in a report that McCabe was not forthcoming during the OIG review. The FBI Office of Professional Responsibility (OPR) subsequently recommended that Attorney General Jeff Sessions fire McCabe, according to The New York Times…

Those are two INDEPENDENT offices who operate outside of our political sphere.

Another former FBI Assistant Director also fired back at Brennan over the weekend, revealing that his sources claim that Brennan was constantly leaking classified information (a felony offense) during his time at the CIA. James Kallstrom once held the #2 position at the FBI, and so he’s uniquely qualified to understand its inner-workings. Here’s what he said in response to Brennan assertions about McCabe.

James Kallstrom: The animus and the malice against Trump is prima facie exposure of how he felt about Trump before the election. My sources tell me [Brennan] was leaking almost weekly or daily, and he was taking that bunch of phony crap supposedly from Russia, and peddling that through the Congress and the media, he was one of the active people. I’ve known him a long time and I think he’s involved, and quite frankly, I think it goes right to the top, quite frankly.

James Kallstrom: It goes right to the top, and it involves that whole strategy. They were going to win [the 2016 election], nobody would ever know this stuff, and they just unleashed the intelligence community. Look at the unmaskings? We haven’t even heard about that yet. Look at the way they violated the rights of these American citizens?

I hope Gen. Flynn sues a lot of people because he was handled so bad…

He didn’t lie to the FBI. They didn’t even interview him about a crime. He was in his legal authorized mode when all that happened.

They are the people who committed felonies, not the General. They’ve ruined [Flynn] and because they threatened his son, you know, they bankrupted this guy that gave his life to this country. Just the whole dealings. Look how they dealt with the IRS? There are so many things they have done badly.

James Kallstrom: “They’ve ruined [@GenFlynn] – and because they threatened his son, you know, they bankrupted this guy that gave his life to this country.” #SundayFutures @MariaBartiromo pic.twitter.com/WVjl3R7icR

All of this is simply more evidence of just how politicized our intelligence and how the liberal community puts politics before the country and why draining the swamp remains a key priority of the Trump administration.need of a thorough house cleaning.

Much of this post was originally seen a Constitution.com