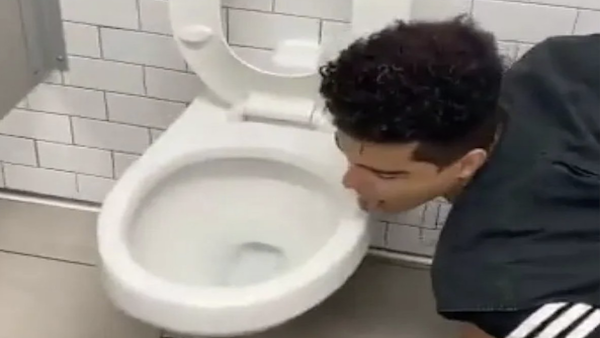 A disturbing trend and hashtag is #Coronaviruschallenge.  Millennials are licking public items or totally gross places to show they aren’t scared of CoronaVirus. Some of them have caught the virus thanks to their stunts.

Cody Lee Pfister, 26, of Warrenton, has been charged by the Warren County Prosecuting Attorney’s Office with a terrorist threat in the second degree.  He posted a video of himself licking deodorants at the Warrenton Missouri Walmart on March 11. As he wiped his tongue across the packages of deodorant he asked, “Who’s scared of coronavirus?” But I understand his tongue doesn’t sweat and smells great.

Pfister “knowingly caused a false belief or fear that a condition involving danger to life existed,” court documents state, adding that he acted “with reckless disregard of the risk causing the evacuation, quarantine or closure of any portion” of Walmart.

According to the Warrenton Police Department, they got complaints about the video from all over the world.

A local resident who took a video of themselves licking the merchandise after making a “Corona Virus” statement at Walmart and posting it to social media has been taken into custody. Charges will be pending through the Warren County Prosecuting Attorney’s Office.

This particular video, which won’t be shared here, has gained some international attention and we have received numerous reports about the video from locals, nearby residents, as well as people from the Netherlands, Ireland, and the United Kingdom. We take these complaints very seriously and would like to thank all of those who reported the video so the issue could be addressed.

Cody Lee wasn’t the only idiot going overboard to make fun of the Coronavirus fears.

A New Jersey man was charged with harassment and making terroristic threats after allegedly purposely coughing on a Wegmans grocery store employee and saying he had coronavirus.

In the video, which was originally shared to TikTok, the 22-year-old aspiring influencer from Miami is seen licking a toilet seat, allegedly while in a plane bathroom.

“Please Tweet this so people can know how to properly be sanitary on the airplane,” she captioned the 6-second clip.

The publicity she received was in the form of anger from Meghan McCain:

I'm just going to leave this here for you to read.#CoronaVirusChallenge pic.twitter.com/V9ycM8qQ0g

For her own sake, I hope she has a significant other because I don’t know if anyone will want to kiss her after watching the video and people will see it as Ms. Louise’s video was posted with the hashtag #CoronavirusChallenge and other’s joined in.

The gross-out stunts didn’t always work out well. Check out this toilet licker:

Youtuber Who Licked A Toilet Seat For The #CoronaVirusChallenge Tests Positive For Corona Virus https://t.co/pScSRQP13K pic.twitter.com/iLZ6e0ut7y

This subway licker got himself ill also.

Perhaps it’s me, but I wouldn’t lick any of the above even without the fear of catching the China Coronavirus. IMHO they shouldn’t be tossed in Jail, they should be tossed into an asylum.