Cory Booker’s Near ‘Spartacus Moment’ Was A SHAM! 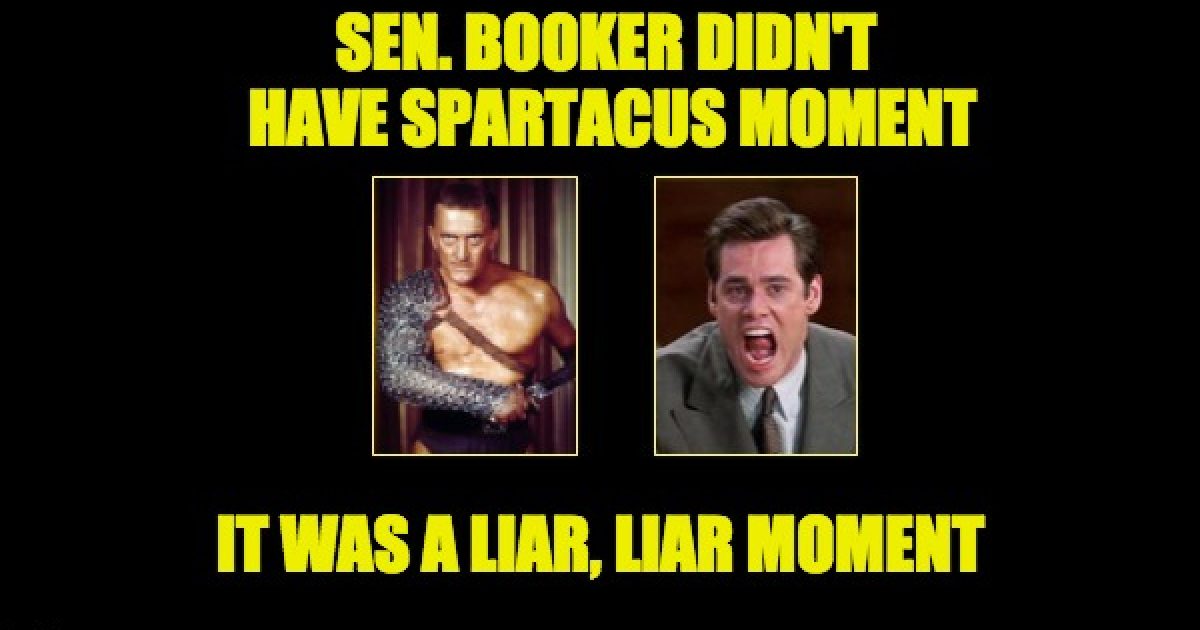 Cory Booker threw himself on a rubber sword this morning. He started out this morning’s Kavanaugh hearings with a proclamation that he was about to break Senate rules and resort to civil disobedience and “knowingly” violate Senate rules to release emails marked “committee confidential” But the documents were already cleared for release.

“I understand the penalty comes with potential ousting from the Senate … I openly invite and accept the consequences of my team releasing that email right now,”

And every time his little act came up, he said I realize there are penalties–bring it on.   He even said, “This is about the closest I’ll probably ever have in my life to an, ‘I am Spartacus’ moment.”

He looked so heroic for being mendacious:

After Booker’s declaration, Sen. John Cornyn (R-TX) angrily exclaimed that just because he is running for president he has no right to violate the Senate rules and “You Don’t Deserve To Sit On The Senate”

What a great actor, you see that at 4am this AM, five hours before he made his proclamation Cory Booker’s office was told that the document in question was cleared for release. In other words, Booker’s act of defiance was not an actual violation of the Senate rules because nothing that he released was marked committee confidential at the time of its release. To quote the Booker his act was a sham.
Apparently, the Republicans on the Judiciary Committee worked with the George W. Bush library and the Justice Department overnight until about three in the morning to clear the emails. An email went out to the staffs of each Senator who requested a document be released soon after.
Later in the meeting, Senator Lee (R-UT) told Cornyn that the documents were released before Booker’s act. “All of this drama this morning apparently was for nothing and it’s unfortunate,” he told reporters during the lunch break
Confirmation of the truth was released soon after Cornyn statement

So, now we’re being told (by Committee staffers) that SenBooker knew BEFORE he made these statements – that the documents in question had already been cleared for release. That’s a significant claim to make, so I’ve asked his office directly. Will update if/when I get response. https://t.co/lNxx3wEVCZ

Here’s what happened: Last night, Senators Leahy, Coons, Blumenthal and Booker requested that certain “committee confidential” documents be made public for use during the hearing for Judge Kavanaugh. https://t.co/nAmaAI5sxm

Chairman Grassley went to bat for them, and worked with the Justice Department and office of former President Bush to waive the relevant statutory restrictions on those documents. Those restrictions were waived before 4:00 AM this morning and made ready for release.

In short, Sen. Booker made a scene this morning about committee confidential docs that Chairman Grassley helped make public prior to the hearing today.

It was also confirmed by Bill Burck, GWB’s records representative who reviewed the documents:

In the end, Booker wasn’t having a Spartacus moment, it was more a Liar, Liar moment