How Many Lives Have ANTIFA or BLM Saved? 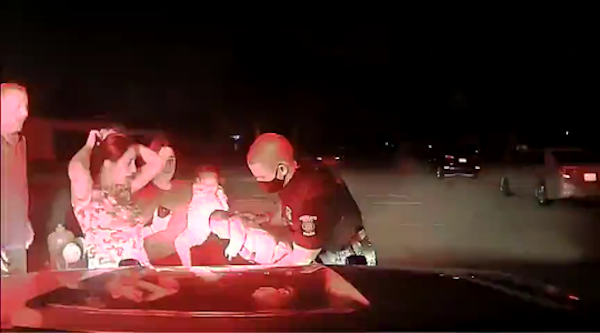 Leftist politicians with an agenda are hellbent on rushing ahead with demonizing and gutting the police department. Cop Saves Choking Baby.

With the wickedly anti-law enforcement slant we have been seeing on ‘official’ news sources, you might half-expect this clip to be describing the police officer using ‘excessive force’ on a baby, with demands to have him fired. Fortunately, even the media hasn’t quite become THAT corrupt. (yet).

Here we have a video of a Michigan police officer rushing to the rescue of a choking baby.

NICK OF TIME: A police officer saves a three-week-old baby from choking as distraught family watch on. https://t.co/L313ezYyZL pic.twitter.com/SlWaB1BlYg

Officer Cameron Maciejewski arrived at the family’s home to find a justifiably panicked mother holding her baby girl, who was blinking but not breathing as her airways were blocked.  Office Maciejewski took the baby in his arms and performed back thrusts to clear the baby’s airway.

The infant coughed up an obstruction and began crying. Firefighters took the child to a hospital for evaluation.

“If it wasn’t for Ofc. Maciejewski’s quick, calm, lifesaving actions, the outcome of this incident could have been tragically different,” the police department said in a statement. “Not only did the officer save the baby, but the officer did an outstanding job consoling the family.”

When mom and dad don’t know what to do, they call on someone who does.

His response was ‘textbook’.

Their little one gets to come home with them tonight, instead of the horrific alternate ending.

As someone who personally knows a family who lost a toddler to a freak choking incident, this is an indescribably big win.

Does anyone else remember oh, about 3 months ago when first responders were our ‘COVID heroes’?

Could we all get back to those ‘good old days’?

That would be great. Thanks.