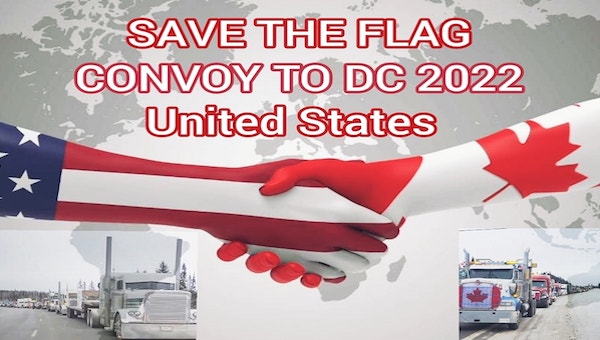 Convoy to DC 2022 is being organized by American truckers in response to the Canadian Freedom Convoy. People are totally fed up with the mandates, the unscientific political coercion that has gone on since the start of the pandemic. And they are grateful that Canada stepped up to the plate. They stated that this protest, like the Canadian one, is meant to be peaceful.

We are taking our country back. Make no mistake, we the patriots and freedom lovers are the majority. The 20-25 percent that want socialism or communism that is the MINORITY. It doesn’t matter right now who is left or who is right, none of that matters if we lose our freedom. Freedom is a banner we can all rally under. Liberty crackles through all of our veins. God bless our Canadian brothers and sisters for reminding us we are fighters! Thanks for the nudge. We are awake. AWAKE. I saw a post on a Canadian site that said ‘you woke the sleeping lions.’ Well, America just got a wake-up call from our Canadian neighbors, and guess what? I’m putting the world on notice. They woke the fire-breathing dragon!!”

The dates for the American Convoy to DC 2022 will be placed on their Facebook group and their GoFundMe account. The organizers, one of which is Brian Von D, the Convoy to DC 2022 page administrator. He told the Epoch Times that the American truckers would ride from California to DC, with numerous trucks joining along the way.

It’s been a unity that I’ve never seen before, not anywhere in the north. Canada has definitely shown that—the most peaceful protest in the convoy I have seen to date. America, it’s your turn, it’s your turn to step up and show what you’re made of…

The government overreach is coming to an end, and this is how we do it.

The truckers in this convoy, like their Canadian counterparts, plan to stay as long as possible until the government coercion comes to an end. We reported on January 29 that Brazil also began a convoy, and now Australia has organized one, as has The Netherlands.

American truckers, Canadian truckers, Brazilian truckers, Australian truckers – all of those who drive a big rig were there for us as the lockdowns and mandates spread in the beginning. They were essential businesses (although not all were designated as that) who fed us and brought goods to our local stores before the advent of any Covid vaccine. Now, suddenly, they are being coerced by governments, as are the healthcare workers, who were once “heroes.”

In 2020, truckers couldn’t pull into the truck stops to shower and had serious problems for food because restaurants were all shut down during the pandemic’s beginning. They had to receive a government letter to give them permission to get fuel. They endured a lot, and now the government is causing them grief with vaccine mandates.

Fuel – food – rest – cleanup. The truckers and those who are on the road are on it for all of us. These are the people who deliver essential goods and services to America in every major crisis – let’s not forget them. Without them, America would be in a whole lot worse shape than from a virus.

So has Canada awakened a “fire-breathing dragon?” Will Convoy to DC 2022 be able to end the Federal government overreach? Or will the powers in DC paint our truckers as “insurrectionists” and attempt to destroy their protest?