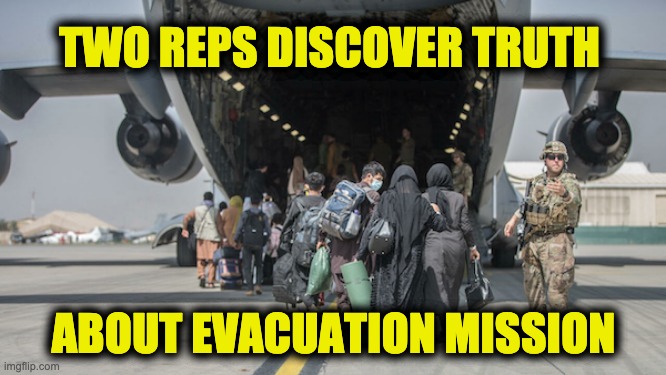 Two Congressmen, a Democrat Seth Moulton (D-MA) and Republican Peter Meijer (R-MI) took a secret trip to the Kabul Airport to get an idea of what is really happening with the evacuation of Americans and the Afghans who helped us in the war effort. Their report was not positive. Congressmen’s secret Kabul trip

Each of the congressmen is a military veteran, and a member of the House Armed Services Committee kept their trip a secret didn’t tell the Congressional leadership, the administration,  or the State Dept. people on the ground. The military on the ground didn’t find out until their plane was about to land.  After taking a commercial flight to the UAE, They flew to Kabul on a military plane and stayed in Kabul for about seven hours. Per Rep. Moulton, they “insisted on leaving in a plane that was not full, in a seat designated for crew so that we didn’t take a seat from someone else.”

The two Reps asked the press not to report their mission until they left Afghanistan airspace. They wanted their trip to be seen as information gathering, not grandstanding.

After returning, the two Congressmen released this statement praising the Americans on the ground and explaining that according to the military people on the ground there is no way that the evacuation would be done by August 31:

As veterans we care deeply about the situation on the ground at Hamid Karzai International Airport. America has a moral obligation to our citizens and loyal allies, and we must make sure that obligation is being kept. Like many veterans, we have spent the last few weeks working without sleep to try to get as many people as we could through the gates and to safety.

As Members of Congress, we have a duty to provide oversight on the executive branch. There is no place in the world right now where oversight matters more. We conducted this visit in secret, speaking about it only after our departure, to minimize the risk and disruption to the people on the ground, and because we were there to gather information, not to grandstand. We left on a plane with empty seats, seated in crew-only seats to ensure that nobody who needed a seat would lose one because of our presence.

Washington should be ashamed of the position we put our service members in, but they represent the best in America. These men and women have been run ragged and are still running strong. Their empathy and dedication to duty are truly inspiring. The acts of heroism and selflessness we witnessed at HKIA make America proud.

We came into this visit wanting, like most veterans, to push the president to extend the August 31st deadline. After talking with commanders on the ground and seeing the situation here, it is obvious that because we started the evacuation so late, that no matter what we do, we won’t get everyone out on time, even by September 11. Sadly and frustratingly, getting our people out depends on maintaining the current, bizarre relationship with the Taliban.

In the coming days, we will have more to share with our colleagues and the American people about what we learned, but after meeting with Marines, soldiers, and dedicated State Department officials on the ground—we want the world to know first and foremost that we have never been prouder to be Americans.

The reaction by the administration and Congressional leadership was not positive.

While the two were still on the flight home, Pelosi sent a memo to all members of the house to “reiterate that the Departments of Defense and State have requested that Members not travel to Afghanistan and the region during this time of danger. Ensuring the safe and timely evacuation of individuals at risk requires the full focus and attention of the US military and diplomatic teams on the ground in Afghanistan.”

Although it was a totally different situation, Pelosi knows what it’s like to take a trip that goes against what an Administration wants: 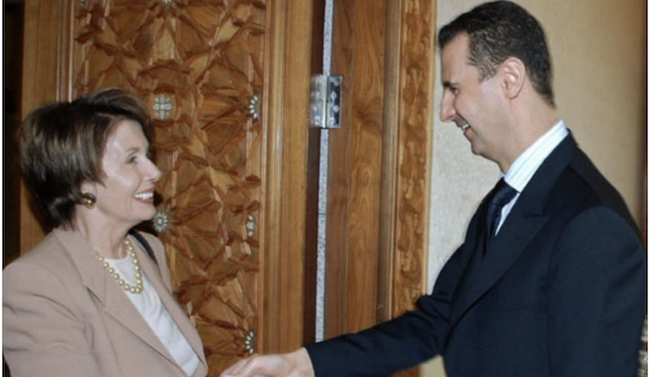 Pelosi Went To Syria in 2007 Despite White House And State Dept. Asking Her Not To Go

However, it seems the real reason for the anger over the trip was that the two congressmen told the truth the Biden administration is hiding. We will not get everyone out by August 31. For example unnamed (of course) administration official told the Washington Post:

“It’s as moronic as it is selfish, They’re taking seats away from Americans and at-risk Afghans — while putting our diplomats and service members at greater risk — so they can have a moment in front of the cameras.”

As they didn’t take seats away from Americans or at-risk Afghans and didn’t use the trip to have a moment before the cameras, this anonymous statement, like much of what we’ve heard about Afghanistan from President Biden and his team of Taliban grovelers, is not true.