MUST WATCH: Lindsey Graham Confronted at Airport by MAGA Supporters 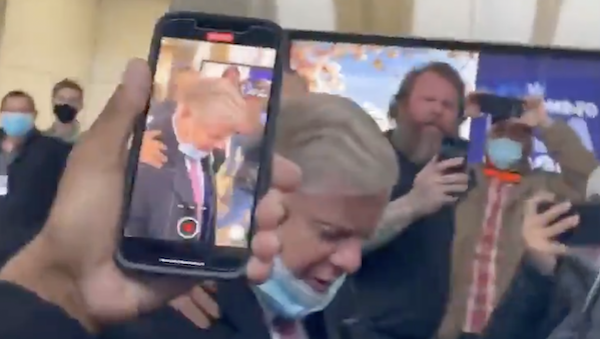 The Republican Party as we knew it may be toast, judging by the reactions that the events of January 6th have garnered. From the Democrats, it’s all condemnation.  Full stop.  Nary a peep of anything else. confronted Lindsey Graham

On the Republican side of things, it is quite a bit of condemnation.  Condemnation is in the majority, that’s certain.  But there are some who are not yet ready to step away from Trump’s brand of populism, and they don’t appear to be going anywhere.

Sen. Lindsey Graham was verbally harassed by about a dozen Donald Trump supporters at Reagan National Airport on Friday after his public break with the president, according to a person at the scene who provided a video of the incident.

Several people repeatedly loudly yelled at the South Carolina Republican that he was a “traitor.” One woman called him a “liar,” while another said, “You work for the people, you work for us, do you hear me?” They promised not to touch him as he was surrounded by security.

“One day [you] will not be able to walk down the street. It is today,” yelled one woman who wasn’t wearing a mask in violation of airport rules. She was wearing a “I love Trump” shirt with the letter “Q” on the back of the shirt, a likely reference to the QAnon conspiracy theory.

Video of the incident was quickly posted to social media.

A source sends this video of a group of Trump supporters today harassing Sen. Lindsey Graham at Reagan airport and loudly calling him a “traitor” after he publicly broke with Trump earlier this week. pic.twitter.com/XBF8K6DIUD

The next video contains strong language.

Check out Lindsey Graham being mobbed by his fans (Trump Supporters) at Reagan Airport…pic.twitter.com/cDqpOreBZy

John McCain’s former mini-me has had an up and down relationship with conservatives in recent years. When McCain was alive he did what he was told. During the Kavanaugh hearings, he was a star with an emotional speech fighting the liberal slander of future justice. But his follow-up to the Capitol riot shows he is supporting the liberal’s use of the incident as a political slander weapon.