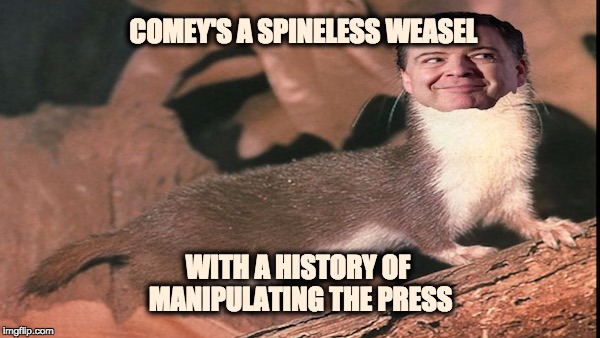 It’s not often that we see conservative pundits agreeing with liberal CNN hosts, but this past week James Comey’s testimony has made for some strange bedfellows, no?

First, the Federalist’s Bre Payton appeared on Fox News’ Fox & Friends where she argued that Comey was a “spineless weasel” who “has a history of manipulating the media.” It was some harsh, but accurate commentary.

I think it’s also very startling that the Senate Intelligence Committee itself has not actually seen the memos either. That was revealed during the line of questioning. So, as a reporter watching Comey talk about this, my inclination is to say, man, I’m never going to trust what this guy has to say. So, I think it’s very shocking to see a narrative come out painting him as a boy scout who is on this quixotic quest for truth and justice because I think it is very clear that he is a spineless weasel who has a history of manipulating the media to cover his own tail.

Over at CNN (yes THAT CNN) host John Berman echoed that commentary while using some “kinder” words.

If you think this is over fuhgeddaboudit, I suspect there will be lots more coming out about Mr. Comey as this story develops.