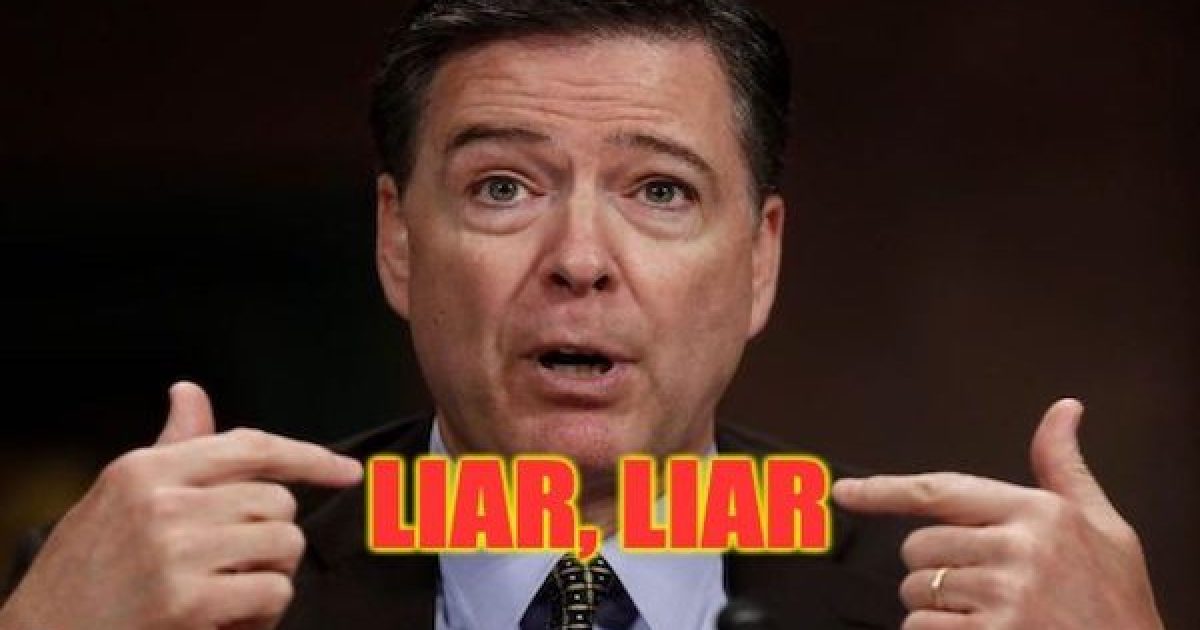 President Trump said James Comey kept telling him that he wasn’t under investigation. But when the president asked Comey to say it publicly, he refused. When Comey testified to Congress, he backed up the President’s story. That refusal was part of why Trump fired James Comey, and the firing of Comey in part led to the nonsensical obstruction of justice investigation of the President.

We may now know why Comey refused to clear the president publicly–he was lying.

Even as he repeatedly assured Trump that he was not a target, the former director was secretly trying to build a conspiracy case against the president, while at times acting as an investigative agent.

Two U.S. officials briefed on the inspector general’s investigation of possible FBI misconduct said Comey was essentially “running a covert operation against” the president, starting with a private “defensive briefing” he gave Trump just weeks before his inauguration. They said Horowitz has examined high-level FBI text messages and other communications indicating Comey was actually conducting a “counterintelligence assessment” of Trump during that January 2017 meeting in New York.

Think about this. One can assume that Comey never found anything on President Trump. He hated and mistrusted this president enough to go rogue and do his own investigation. If he had found anything, it would have been leaked to the liberal media.

And there’s more, not only was the FBI Director running an unauthorized investigation of the President, but he had a mole in the Trump White House reporting back to to the FBI.

Comey wasn’t going totally solo. At least it seems as if he had some help. His first meeting with Trump about the Steele Dossier was on January 7, 2017. But the day before  “the FBI director met in the Oval Office with President Obama and Vice President Joe Biden to discuss how to brief Trump.” Also at the meeting was National Security Adviser Susan Rice, DHS Secretary Jeh Johnson, Deputy AG Sally Yates, and National Intelligence Director/perjurer James Clapper.

As former Assistant United States Attorney for the Southern District of New York and National Review columnist Andrew McCarthy told Fox News, even Comey’s January 2017 meeting with Trump was based on falsehood:

The investigation was always hoping to find something on Trump. That is why, for example, when director Comey briefed then-President-elect Trump about the Steele dossier, he told Trump only about the salacious allegation involving prostitutes in a Moscow hotel; he did not tell the president-elect either that the main thrust of the dossier was Trump’s purported espionage conspiracy with the Kremlin, nor that the FBI had gone to the FISC to get surveillance warrants based on the dossier. The FBI was telling the president-elect that the allegations were salacious and unverified, yet at that very moment, they were presenting them to a federal court as information the judges could rely on to authorize spying.

One of the most frightening parts of Paul Sperry’s piece was how it ended:

“Comey typed up his notes on his laptop in his government vehicle less than five minutes after he walked out of Trump Tower, according to a heavily redacted Jan. 7, 2017, email to his top aides. Comey self-classified the notes at the “SECRET” level.

“I executed the session exactly as planned,” Comey reported back to his “sensitive matter team.”

Incredibly this entire report, indeed the whole Russiagate hoax reads like a cheesy political thriller. The FBI works with President, spy agencies, and the press in an attempt the old party to oust the incoming President and keep power. I think I’ve read it before. The problem is it’s not a cheesy novel, it’s a reality. And the Democrats are still trying to make the lie stick.

Hopefully, when Michael Horowitz’s full report is released sometime in the next month and a half, this will all be exposed. And hopefully when exposed the creators of this plot to overturn a legitimate American election will face legal consequences.