Comey WASN’T Snookered, He Knew Russian Doc. Was Fake, But Used It As Excuse Anyway 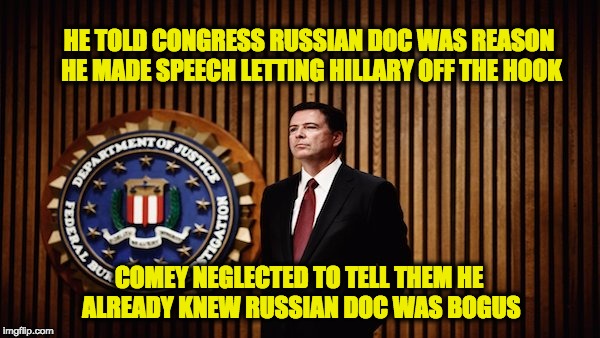 Earlier this week we reported that because the FBI received a secret Russian document describing an email indicating that the Justice Dept. would not try to hard to win the case against Hillary Clinton, then-FBI director Comey was snookered into making his speech that Ms. Clinton was probably guilty but no prosecutor would press charges against her. The Washington Post had reported the document was not only unreliable but possibly a Russian ruse “according to people familiar with its contents.” Now CNN reports that Comey wasn’t snookered, he knew the document was fake BEFORE he made the speech letting HRC off the hook. He snookered the FBI, the Justice Dept., and congress by using it as an excuse for making the speech.

Then-FBI Director James Comey knew that a critical piece of information relating to the investigation into Hillary Clinton’s email was fake — created by Russian intelligence — but he feared that if it became public it would undermine the probe and the Justice Department itself, according to multiple officials with knowledge of the process.

As a result, Comey acted unilaterally last summer to publicly declare the investigation over — without consulting then-Attorney General Loretta Lynch — while at the same time stating that Clinton had been “extremely careless” in her handling of classified information. His press conference caused a firestorm of controversy and drew criticism from both Democrats and Republicans.
Comey’s actions based on what he knew was Russian disinformation offer a stark example of the way Russian interference impacted the decisions of the highest-level US officials during the 2016 campaign.

If true this offers a stark example that Comey was dishonest with his people, the people who worked for him at the FBI, the Justice Department, Senate, and eventually the American people. After the Washington Post published their report:

…acting FBI Director Andrew McCabe went to Capitol Hill Thursday to push back on the notion that the FBI was duped, according to a source familiar with a meeting McCabe had with members of the Senate intelligence committee.

The question is was he telling the truth or did he want to dispel the idea that the FBI could be snookered.
Apparently the former FBI director had already told congress the email in the document in a private session, supposedly between Democratic National Committee Chairwoman Debbie Wasserman Schultz and Leonard Benardo, an official at George Soros’ Open Society Foundation. In the email Debby downer told Benardo that “then-Attorney General Loretta E. Lynch had privately assured a senior Clinton campaign staffer named Amanda Renteria that the email investigation would not push too deeply into the matter. He told the legislators that was the reason he made July speech. What he didn’t tell them was he didn’t think the document with the email was fake.

Sources close to Comey tell CNN he felt that it didn’t matter if the information was accurate, because his big fear was that if the Russians released the information publicly, there would be no way for law enforcement and intelligence officials to discredit it without burning intelligence sources and methods. There were other factors behind Comey’s decision, sources say.

Another factor for his going rogue which he didn’t mention to the legislators was “that Lynch was compromised because Bill Clinton boarded her plane and spoke to her during the investigation, these sources told CNN.”
But that would require openness and honesty, something it seems that former FBI Director James Comey didn’t have a lot of.
Facebook Twitter Flipboard