Why FBI Director Comey Got Fired (Includes The Firing Letters) 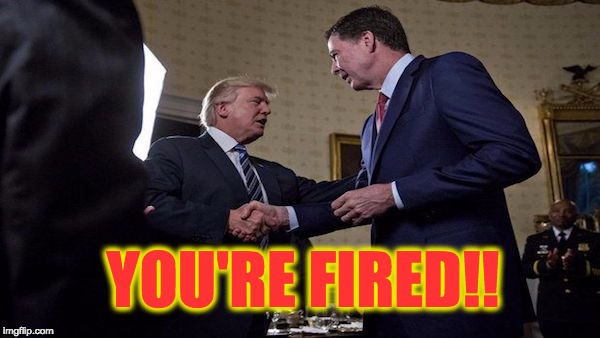 Anyone close to a TV or Radio knows by now that President Trump fired FBI Comey Director around dinner time on Tuesday. What the letters below indicate, especially the one from the Deputy AG Rod Rosenstein, is that he was fired because of the way he handled the Hillary Clinton investigation, opining that he couldn’t defend Comey’s handling of the investigation into Hillary Clinton’s emails.

In actuality Comey deserved to be fired, he was unqualified to hold the office of FBI director—most beltway politicians would agree with that statement twenty-four hours ago. And while the Democrats will say the FBI director was fired to stop the Russia investigation, that is a ridiculous suggestion as the people who may be investigating the possible Trump Team/Russia collusion are still secure in their jobs.

As for the new calls for an special prosecutor, it’s doubtful that will happen. Along with the fact that it’s not necessary,  Deputy AG Rod Rosenstein his direct superior and the person who wrote the letter strongly recommending Comey’s ouster, is the same person would have to appoint the prosecutor.  Catherine Herridge of Fox said the timing of the Comey timing was based on the fact that Rosenstein was only recently confirmed.

“Almost everyone agrees the Director made serious mistakes; it is one of the few issues that unites people of diverse perspectives”

(…) “The Director was wrong to usurp the Attorney General’s authority on July 5, 2016, and announce his conclusion that the case should be closed without prosecution. It is not the function of the Director to make such an announcement,”

Rosenstein added that Comey compounded the screw-up when he “ignored another longstanding principle: we do not hold press conferences to release derogatory information about the subject of a declined criminal investigation.”

If that was the only reason Comey would have been fired as soon as President Trump was inaugurated. More likely Comey’s recent testimony which many people was both bizarre and narcissistic– he exaggerated the extent of the letters Huma Abedin forwarded to her husband, causing the FBI to send the committee a letter of apology and he refused to say that his moves regarding the Hillary emails were wrong, that testimony may have been the straw that broke the camel’s back.

In fact in his letter Rosenstein criticized Comey’s testimony, specifically his language saying that if he didn’t tell congress about reopening the investigation it would be concealment. The Deputy AG pointed that conceal was a “loaded word that misstates the issue.”

The Democrats of course are having a fit.  Many of the same Democrats who called for the resignation of James Comey a few months ago are now saying that Trumps move was horrific, including Chuck Schumer who had said he lost confidence in Comey.

Judicial Watch President Tom Fitton who would beat up a president of any party he believed was corrupt, made the following statement in response to President Trump’s decision to fire FBI Director James Comey:

“This is an important move to restore public confidence in the fair administration of justice at the Federal level. Mr. Comey did not seem to understand some of the laws he was asked to investigate and unfortunately politicized his sensitive position as the FBI director. President Trump took the right step in cleaning house at the FBI.”

Read the President’s letter to Comey, along with the recommendations from AG Sessions, and Deputy AG Rosenstein