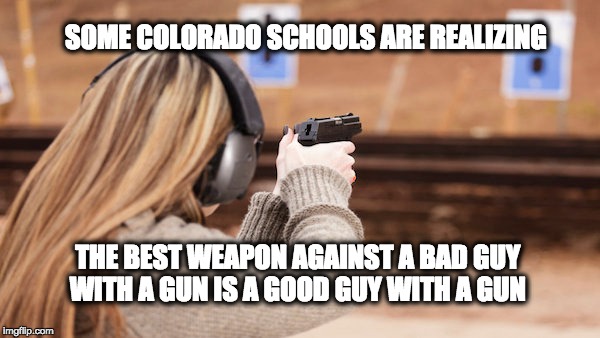 Some school districts in Colorado are finally realizing that nothing stops a bad guy with a gun faster than a good guy with a gun. They are beginning a program to train school employees to carry guns as first responders in their schools.

Under current Colorado law, school staff members with permits can carry concealed guns in school so long as they have been designated as a security officer. So this week, educators are preparing to become security officers by heading to the gun range for specialized training.

“Over a three-day session, 17 school personnel will be taught at a Weld County range near Denver on how to become ‘armed first responders.’

“They will be taught by the ‘Faculty Administrator Safety Training and Emergency Response’ group or FASTER, for short.

“The ‘FASTER’ group was founded in response to the devastating 2012 Sandy Hook school shooting in Newtown, Connecticut.

Once the educators complete the program they will be able conceal carry their guns into the schools and protect students if necessary.

Generally the school districts participating in the program are in rural areas where it would take over a half an hour for the local law enforcement to arrive with help.

Sadly Colorado has suffered through two major mass shootings in the past two decades, the Columbine High School massacre where two students killed 13 classmates, and wounded more than twenty others before turning the guns on themselves; and thirteen years later when James Holmes entered a movie theater in Aurora, Colorado and began indiscriminately firing into the crowd killing 12 people and wounding 70 more.

The idea for putting armed responders in school was first proposed after Columbine by President Bill Clinton.

In April 2000 as part of his commemoration of the first anniversary of deaths at Columbine High School in his weekly radio speech President Bubba announced $120 million in grants, much of it for a program to place police officers with guns in schools.

As the Associated Press reported at the time:

“In our national struggle against youth violence we must not fail our children; our future depends on it,” the president said in his weekly radio address.

Parents, teens, teachers, youth workers and others will discuss research that indicates the preteen years set patterns for behavior and success in adulthood. Other subjects will include the risks, challenges and anxieties faced by young people today and what can be done to avoid dangerous or risky behavior.

“We need to talk about safety and security in every house in America,” Clinton said.

(…) Clinton also unveiled the $60-million fifth round of funding for “COPS in School,” a Justice Department program that helps pay the costs of placing police officers in schools to help make them safer for students and teachers. The money will be used to provide 452 officers in schools in more than 220 communities.

“Already, it has placed 2,200 officers in more than 1,000 communities across our nation, where they are heightening school safety as well as coaching sports and acting as mentors and mediators for kids in need,” Clinton said.

Since that proposal was made, there’s been debate over the possibility of arming school teachers or hiring armed guards to prevent further mass shootings.

The argument by many is that “gun free” schools do nothing to deter mass-murderers from committing whatever horrible acts they wish.  The lack of firearms on school campuses only serves to entice the crazy killers to use the schools as targets, knowing they cannot be confronted with equal weaponry. And as explained above, in rural Colorado areas  many schools are to far away from law enforcement to stop an assailant quickly.

This program seems reasonable, requiring training approved by local law enforcement, then allowing a school employee to carry a concealed weapon to use only if necessary. It is a certain improvement over allowing children to fend for themselves if someone shows up bent on committing a massacre.