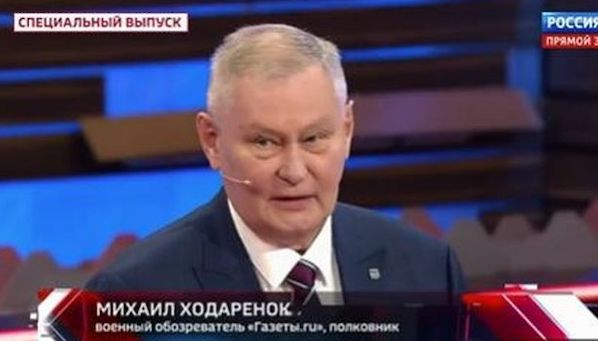 Many rumors have hinted that Russians aren’t happy with the Ukraine war. But this one is not a rumor. Mikhail Khodarenok, a military analyst and retired Colonel, displayed his displeasure with the Ukraine war while being interviewed on Russian TV. He actually indicated that the war was lost.

The programme was 60 Minutes, the flagship twice-daily talk show on Russian state TV: studio discussion that promotes the Kremlin line on absolutely everything, including on President Putin’s so-called “special military operation” in Ukraine.

The Kremlin still maintains that the Russian offensive is going according to plan.

And that last goal may be achieved soon, Colonel Khodarenok indicated that the war was already lost.

He warned that “the situation [for Russia] will clearly get worse” as Ukraine receives additional military assistance from the West and that “the Ukrainian army can arm a million people”.

Referring to Ukrainian soldiers, he noted: “The desire to defend their motherland very much exists. Ultimate victory on the battlefield is determined by the high morale of troops who are spilling blood for the ideas they are ready to fight for.

It’s more than that. The Ukrainians are worried that if they lose and get absorbed by Russia, they will have to suffer through those harsh Russian winters.

The Colonel said another problem with the war effort was politics. The entire world was against them, “even if we don’t want to admit it.”

“The situation cannot be considered normal when against us, there is a coalition of 42 countries and when our resources, military-political and military-technical, are limited.”

The others in the studio were shocked into silence.

Khodarenok wrote an op-ed warning against the Ukraine invasion before the Russian troops went in.

Writing in Russia’s Independent Military Review back in February, before Moscow attacked Ukraine, the defence analyst had criticised “enthusiastic hawks and hasty cuckoos” for claiming that Russia would easily win a war against Ukraine.

His conclusion back then: “An armed conflict with Ukraine is not in Russia’s national interests.”

He didn’t say anything about Great Britain learning to spell defense correctly.

Based on Putin’s previous behavior, don’t be surprised if Colonel Khodarenok just happens to disappear or suddenly gets a fatal disease. When Ukraine’s third president Viktor Yushchenko said that he hoped Europe would wake up to the Russian threat, he was mysteriously poisoned with dioxin. Other political opponents such as Sergei Skripal, Boris Nemtsov, and Denis Voronenkov, among others, were killed.

Putin also has a different way of dealing with what he considers fake news. The murders of journalists Natalia Estemirova, Anastasiya Baburova, and Yuri Shchekochikhin.There are many reports that Putin is dying from cancer. I hope the war is over before he meets his maker so there can be a Putin trial in a Russian court or, even better, a war crimes trial by the international community.