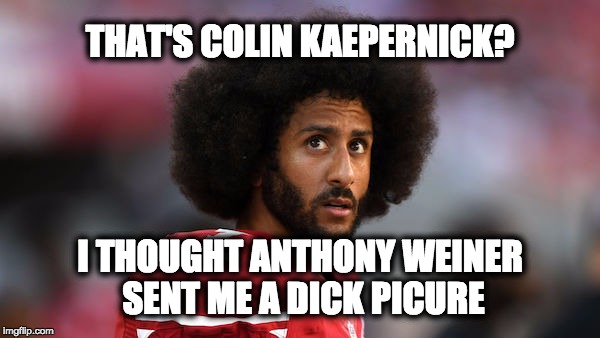 According to his supporters, unemployed NFL quarterback Colin Kaepernick is being blackballed not just because of his taking of a knee during the national anthem, but because he was doing to protest racial inequality. And they believe the reason he hasn’t been signed by an NFL team as of yet is that the league is racist. In truth, Colin Kaepernick’s difficulty in finding a new job stems from the fact that last season he demonstrated a disrespect for America, the league, Fans, and the TV networks.

Keep in mind that he wasn’t fired from the 49ers, Kaepernick opted out of his 49ers contract in March and became a free agent.  And because he hasn’t been signed by any other team movie director and activist Spike Lee is promoting a “United We Stand” rally at NFL headquarters in New York in support of quarterback Colin Kaepernick.

I would gander that it is true that Kaepernick is unemployed because of his protest, taking a knee during the national anthem. More than one study concluded that his protest caused fewer people to watch NFL last season. That rating drop led to a big drop in advertising revenue for the NFL’s TV partners–those partners are the reason the NFL is as successful as it is, giving the teams the ability to pay large salaries to the players. In other words along with showing disrespect to this great country that gave him so much Kaepernickcrapped all over the league’s partners.  anyone in any other industry who causes a major revenue loss to his employer’s parters would find it difficult to maintain employment.

Also by aligning himself with the radical anti-cop, anti-Semitic Black Lives Matter movement, Kaepernick has become an icon of the BLM movement’s bullying during a time in which the NFL has enough irresponsible man-children already.  Coaches and managers are certainly not thrilled with the prospect of bringing his style of childish anger to their organizations, let alone have NFL commentators focused on the trendy pre-game ritual of a bratty backup rather than the actual game.

Now, new information has been released regarding Kaepernick’s true intentions in the league, according to the Daily Caller, the unemployed quarterback has turned down job offers from NFL teams in order to maintain his misguided position on top of the victims of racism list.

Kaepernick’s God complex could likely keep him sidelined for years to come, if not longer.

Americans have turned away from the NFL in increasingly large numbers over the course of the last two years, with many analysts speculating that the league’s apparent liberal slant is affecting their normally-ardent fanbase.  This has been unfortunately exacerbated by ESPN, the world’s premiere sporting television network, who has repeatedly sided with Democratic Party ideals in their coverage and staffing, disregarding the nation’s conservative majority in the age of Donald Trump.