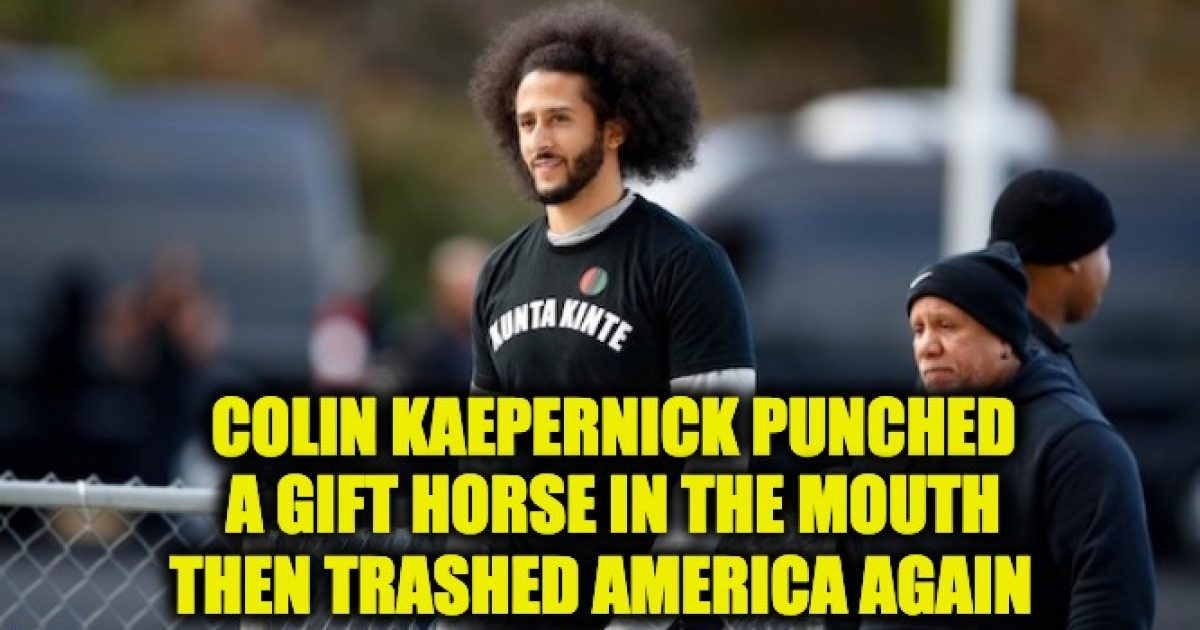 The saga of Colin Kaepernick is not yet over. He ruined his NFL tryout and for Thanksgiving Colin Kaepernick trashes America, further alienating patriotic NFL fans.  It would appear, at this point, that the guy just wants to remain relevant for the sake of staying relevant. But is anybody asking for it? From Daily Wire:

In a tweet that featured a video, Kaepernick wrote, “Spent the morning at the Indigenous People’s Sunrise Ceremony on the 50 year anniversary of the Occupation of Alcatraz. The US government has stolen over 1.5 billion acres of land from Indigenous people. Thank you to my Indigenous family, I’m with you today and always.”

Spent the morning at the Indigenous People’s Sunrise Ceremony on the 50 year anniversary of the Occupation of Alcatraz. The US government has stolen over 1.5 billion acres of land from Indigenous people. Thank you to my Indigenous family, I’m with you today and always.✊🏽 pic.twitter.com/6cTuktUlQN

Does he understand why NFL teams are reluctant to touch him? Why he is not a fan favorite? He even screwed up his latest chance.

Jay-Z reportedly helped Kaepernick secure a workout for NFL teams as a way to make amends with his liberal fanbase after working on a project with Commissioner Roger Goodell. They thought he sold out. 24 of the NFL’s 32 teams were set to show up to the private workout in Atlanta. There wasn’t supposed to be any media in attendance.

At the last minute, seemingly out of the blue, Colin and his camp decided to change the location so there would be media. You know, for transparency

NFL’s response to Colin Kaepernick opting to do his own workout today in Atlanta:

BS from Colin Kaepernick after his workout.

There’s the old saying, “don’t look a gift horse in the mouth.” Kaepernick didn’t look it in the mouth, he punched it in the face. Kind of like Mongo in Blazing Saddles.

Powerful statement from Colin Kaepernick after his workout.

"Our biggest thing with everything today was making sure we had transparency with what went on. We weren't getting that elsewhere so we came out here." pic.twitter.com/1ZJl5rSQ6z

Kaepernick made a big deal about doing a workout for NFL teams. The NFL set it up for him and 25 teams agreed to attend. At the last minute he insisted on having his own film crew. Because he didnt get his way, he pulled out. This guy doesn't want to play. He just wants attention

It wasn’t a total waste, one of the receivers Kaepernick used for his work out is getting a trying out with the Cleveland Browns.

I doubt highly that Colin Kaepernick will be signed by any NFL team. It’s not just that his God complex makes any team concerned the will cause trouble in the locker room,  but for the 2016-2018 seasons, he killed the NFL ratings because of the anti-American flag protests he began.  The rating drop led to a significant decrease in advertising revenue for the NFL’s TV partners–those partners are the reason the NFL is as successful as it is, giving the teams the ability to pay large salaries to the players. In other words, along with showing disrespect to this great country that gave him so much, Kaepernick crapped all over the league’s partners. Anyone, in any other industry who causes a significant revenue loss to his employer’s partners, would find it difficult to maintain employment.

Here’s the real truth, although he denies it, this protest was always about respecting America, and the Flag–Colin Kaepernick said so. After the very first time, he sat down for the National Anthem Kaepernick told the press he was protesting because he didn’t want to honor the Flag.

Keep in mind that he wasn’t fired from the 49ers, Kaepernick opted out of his 49ers contract in March 2017 and became a free agent. A 2017 preseason article in the Daily Caller reported the unemployed quarterback had turned down job offers from NFL teams:

Here’s the bottom line, the man who single-handedly began a protest that may permanently damage the goose that lays the golden marketing eggs was out of work because of his own ego. He screwed up an opportunity the NFL gave him on a silver platter. And he used Thanksgiving as another opportunity to trash America. Is there really an NFL owner willing to increase the anger of the patriotic NFL fans, and hurt their ad revenue just to satisfy a mediocre backup quarterback?

Parts of this post were first seen at Flag and Cross.com