How Many Slaves Made Millions> 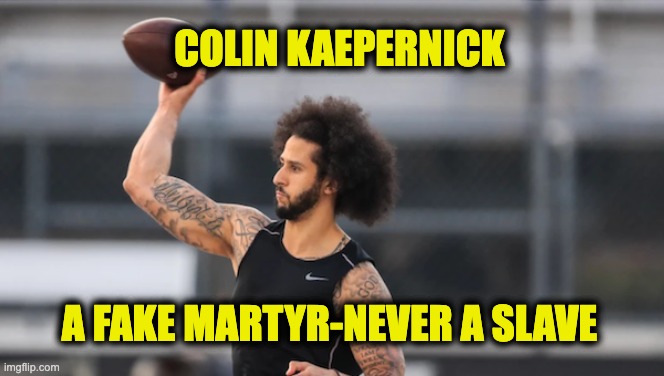 Colin Kaepernick, the man who parlayed making millions as an NFL Quarterback into making millions as a professional martyr, has a Netflix special. The special called “Colin In Black & White” is biographical from his perspective.  It looks into the mediocre Quarterback’s life from high school days to his professional suicide. His NFL exit was not because of his political views but because his ego is the size of North America.

During the special Kaepernick, compared the NFL Draft and training camp to slavery. The guy made millions of dollars playing a game…that doesn’t come close to being comparable to slavery.

Kaepernick made many of those millions after the quality of his play slipped. Per ESPN, an average quarterback will have a QBR (quarterback rating\) around 50, A Pro Bowl-level player will have a QBR around 75 for the season. Kaepernick was the starting QB for the 49ers for a total of four and a half years. While he never achieved that 75 QBR, his first year and a half as a starter were successful. His QBR was in the 60s, and the team had a record of  17 wins, 6 losses.

During his final two years in the NFL (2015 &16), the 49ers had a record of 3 wins and 16 losses.  Kaepernick had QBRs of 43.7 and 49.2, below mediocrity. At the same made the most money in his career. His contract was for $19 million/year but based on his performance, and how NFL contracts are structured with incentives, I suspect the salary he received was probably closer to $10 million/year. Not bad for a “slave.”

Kaepernick also claimed, “Before they put you on the field, teams poke, prod, and examine you searching for any defect that might affect your performance.” You bet they did—General Managers want to check someone out before giving that player a multi-million dollar contract.

After he left the NFL, Colin signed with Nike to make millions.

Details on Kaepernick and #Nike:

– It’s wide endorsement. He’s going to have his own branded line. Shoes, shirts, jerseys, etc. There will be Kaepernick apparel.

– Contract is a “star” deal on par with a top end #NFL player. Millions per year. Star deals also include royalties.

Colin Kaepernick has positioned himself as a martyr who was drummed out of the NFL because of his color and refusal to stand for the national anthem. That is a lie. He even lied about why he protested the Old Glory. Per his own words, the mediocre QB’s “getting on the knee protest” was not about “police abuse,” as he claimed when fans objected. It was about disrespecting the flag of the racist evil nation, the United States.

Kaepernick did not say he thought America was a great country that just had a problem of police abuse. He specifically identified the nation as an evil oppressor of people of color. Additionally, he has shown support for various black nationalist figures

Colin Kaepernick wasn’t fired from the 49ers. He opted out of his San Fransico 49ers contract because he didn’t want to be a back-up quarterback and get a back-up’s salary. But based on his performance, that’s all he deserved. Therefore he chose to become a free agent.  The main reason was that Kaepernick priced himself out of the market. He thought he was better and worth more than his mediocracy deserved. If he had the talent that his ego thought he had, someone would have paid him the big bucks to play–but that wasn’t the case.

In November 2019, Jay-Z helped Kaepernick secure a workout for in a deal with NFL Commissioner Roger Goodell. 24 of the NFL’s 32 teams were set to show up to the private workout in Atlanta. Despite getting the second chance he really didn’t deserve, Kapernick and his camp decided to change the Atlanta location at the last minute because, among other reasons, he wanted media there. Because of the last-minute change, only 8 teams showed up.

Colin (or Kunta Kinte as his shirt read) got called out for turning the event into a sideshow.

There’s the old saying, “don’t look a gift horse in the mouth.” Kaepernick didn’t look it in the mouth. He punched it in the face. Not one of the clubs who showed up signed him. But the receiver Kaepernick picked to catch his passes in the workout was signed.

Speaking to reporters at the NFL’s 2019 winter meetings in Irving, Texas, Goodell was asked about the November Kaepernick workout for NFL teams. Goodell answered that Kaepernick blew his chance.

Colin Kaepernick is not a martyr, nor is he a slave. He committed career suicide because of his enormous ego.

By allowing him to call the NFL selection process “slavery,” Netflix did a disservice to the millions who suffered through the horrible practice—they should be ashamed of themselves.