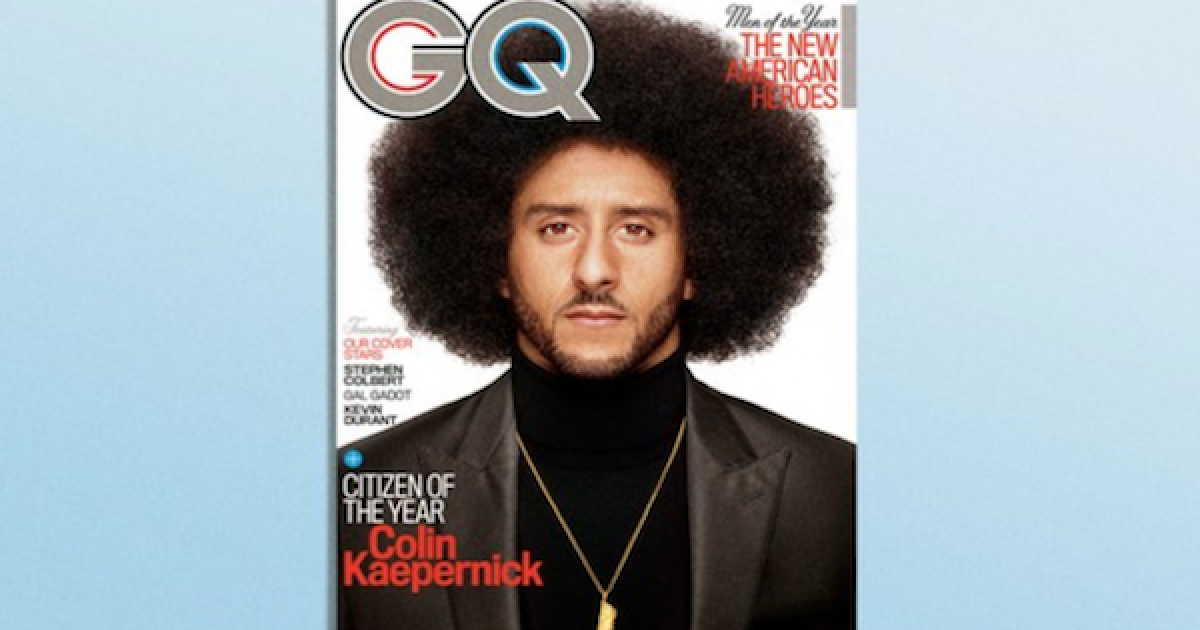 At this point, I should probably stop being surprised when the mainstream media makes an idiotic decision… but as cynical as I am, I still find myself being surprised by their foolishness.

The latest example of breathtaking ridiculousness comes to us from the haters at GQ,  who have obviously decided that they have no use for the vast majority of Americans.

In the latest edition of their magazine, GQ named unemployed former Quarterback Colin Kaepernick as their “Citizen of the Year.”

I’m honored to be recognized by @GQMagazine as Citizen of the Year. https://t.co/s6wBZTa6tH

.@GQMagazine names Colin Kaepernick its Citizen of the Year. pic.twitter.com/7Vnw7Dx9A7

Here’s what GQ had to say about their consideration of Kaepernick for the “man of the year” award.

Much has changed in the four years since Colin Kaepernick was last on the cover of GQ. Back then he was a rippling superhero of a quarterback on the rise. But a simple act—kneeling during the national anthem—changed everything. It cost him his job. It also transformed Colin Kaepernick into a lightning rod and a powerful symbol of activism and resistance.

Though Colin Kaepernick continues his silent protest, he agreed to collaborate with GQ on a special project for our December Men of the Year issue in an effort to, as the piece explains, “reclaim the narrative of his protest.” He helped us assemble a ten-person team of his closest confidants—including rapper J.Cole, director Ava DuVernay, activist Harry Belafonte, and Women’s March co-organizer Linda Sarsour—to speak on the subjects of activism, protest, and equality, and to offer some rare insights into Colin Kaepernick himself.

First, it’s cute that GQ believes that Kaepernick is out of football solely because of his protest.Colin Kaepernick decided he wanted to become a free agent so he left the 49ers. No other team wanted to pay him a starting quarterback’s salary because he no longer had starting quarterback ability. The truth is if he was good enough to actually help a team win his protest wouldn’t keep him from getting a job.

Secondly, you can tell a lot about Kaepernick’s protest from reading who GQ lists as his friends. Harry Belafonte, the communist agitator who has chosen to live a life of luxury and ease in the United States while supporting tinpot dictatorships in Latin America (Belafonte has counted the Castro brothers and Hugo Chavez among his dear friends). Oddly, Belafonte has remained in America, in the lap of luxury, instead of joining the hoi polloi in Cuba or Venezuela. Linda Sarsour, is a sharia-supporting Islamist with ties to radical terrorist organizations who has become a darling to her useful idiots on the Left. (See here, here, and here.)

Many of the NFL players who have joined the protests in the wake of Kaepernick’s original decision to take a knee have done so believing that the protest was to evoke awareness of continued racism in America today. However,  Kaepernick’s protest was about so much more than continuing the fight against racism.

According to the man himself, the protest was about unmasking America as the evil, racist nation that we are:

This is hardly the all-American patriot that liberals have tried to imagine as the archetypal kneeler.

Kaepernick hates our history, he hates our culture, he hates our values, and he hates our nation.He is the exact opposite of a “good citizen,” because he’s an anti-American communist who would like nothing more than to see our nation collapse and be conquered by communism.

GQ should be ashamed for even considering him for “citizen of the year,” let alone awarding him the honor. But then again it’s sister magazine Glamour. picked anti-Semite, anti-American, pro-Shariah, Linda Sarsour as one of their women of the year.