He’s Not A Martyr, Colin Kaepernick’s Inflated Ego Kept Him Out Of NFL 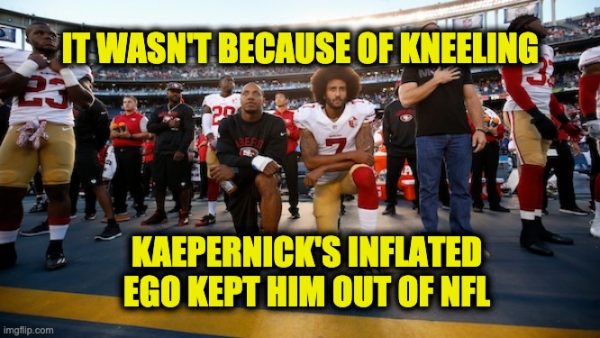 Because he was killed by the knee of a rogue Minnesota cop, the killing George Floyd is causing many in the media to regurgitate their calls for Colin Kaepernick to be hired by an NFL team. That is a disservice to George Floyd–he was murdered. Kaepernick isn’t out of football because of his taking a knee during the anthem protest, he is out of football because his very inflated ego blew his chances to play in the NFL. Colin Kaepernick’s ego

As reported by Bizpac Review, the mainstream media is littered with columns calling for Kaepernick’s return:

Before getting to Kaepernick’s self-destruction of his NFL career, allow me to point out why he started the “getting on the knee protest.” Per Colin Kaepernick, the protest was all about disrespecting the flag of the racist evil nation that he believes we are.

Colin Kaepernick wasn’t fired from the 49ers, he opted out of his San Fransico 49ers contract because he didn’t want to be a back-up quarterback and get a back-up’s salary. Therefore he chose to become a free agent.  No one wanted to sign the QB. The main reason was that Kaepernick priced himself out of the market. He thought he was better and worth more than his mediocracy deserved. If he had the talent that his ego thought he had, someone would have paid him the big bucks to play–but that wasn’t the case.

At the last minute, Kapernick and his camp decided to change the Atlanta location because, among other reasons, he wanted media there. Because of the last-minute change, only 8 teams showed up.

There’s the old saying, “don’t look a gift horse in the mouth.” Kaepernick didn’t look it in the mouth, he punched it in the face. Not one of the clubs who showed up signed him. But the receiver Kaepernick picked to catch his passes in the workout was signed.

Speaking to reporters at the NFL winter meetings in Irving, Texas, Goodell was asked about the November Kaepernick workout for NFL teams. Goodell answered that Kaepernick blew his chance.

Colin Kaepernick should not be discussed in the same breath as George Floyd. Mr. Floyd was murdered by one of the few bad cops out of the almost 700,000 in the country.

Kaepernick wasn’t murdered, he committed career suicide because of his large ego. Bringing his NFL career up because of the killing of George Floyd is not only a false liberal narrative, but it does a disservice to Mr. Floyd’s memory.