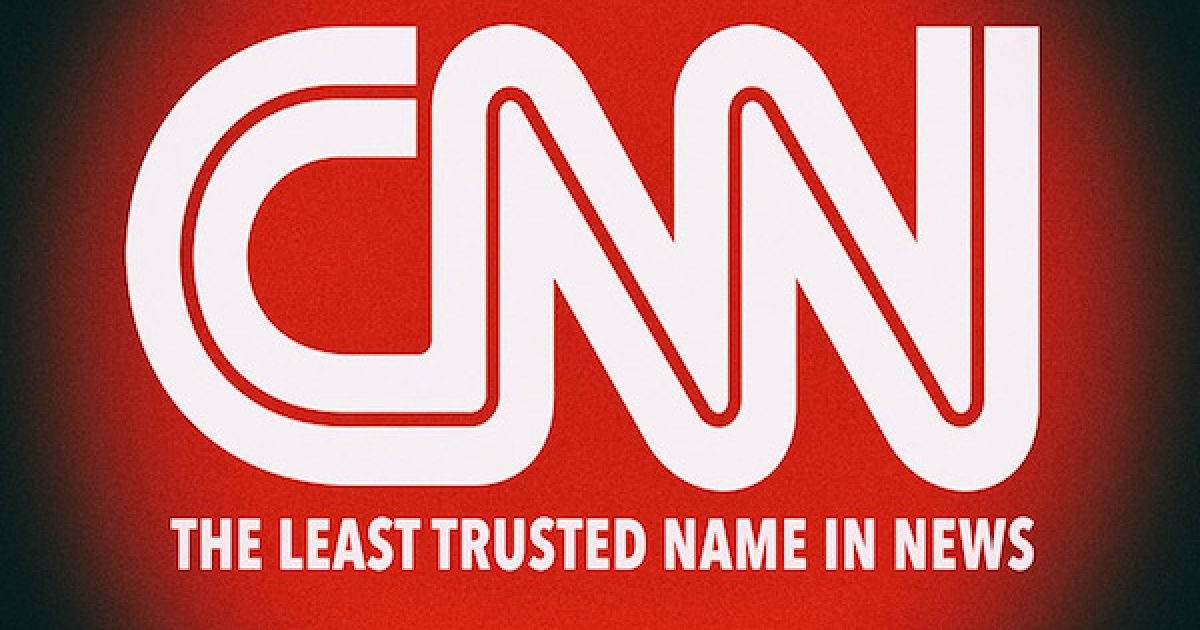 Sometimes fake news is subtle. Rather than coming out with the spectacular story from unnamed sources, sometimes it’s just a matter of cropping a photo in a way that makes President Trump look bad. CNN did it earlier this week in reporting about the Trump team’s Camp David weekend with Congressional leaders which was incorrectly labeled by Republican-hating GOP Consultant Anna Navarro as “10 Old Straight Guys, in a tweet including a cut picture. Navarro proved that CNN didn’t learn from its first picture cropping scandal Fishgate.

Do you recall Fishgate? If you don’t, that may be because it was a non-scandal created by CNN that turned out to blow up in the face of the cable network, whose motto — “Facts first” — never ceases to be good for a laugh.

The president was given a box of fish food to feed the koi in a large tank. CNN, which despises him, published a video that showed the ostensibly clueless Trump dumping his entire box of food into the tank.

President Trump feeds fish with PM Shinzo Abe in Japan, then pours the entire box of food into the koi pond. pic.twitter.com/CQjGGf5k0J

It wasn’t until after other sources shared the entire video, which showed Abe first pouring his entire box of food into the tank, that CNN — no doubt much to its chagrin — corrected its version of “the facts.”

You might think the network had learned from its deceit, but not a chance. Recently, political commentator Ana Navarro tweeted a photo designed to prove that America’s fate is being decided solely by “old straight white men.”

The tweet, which has since been deleted(!), still exists as a screen cap: 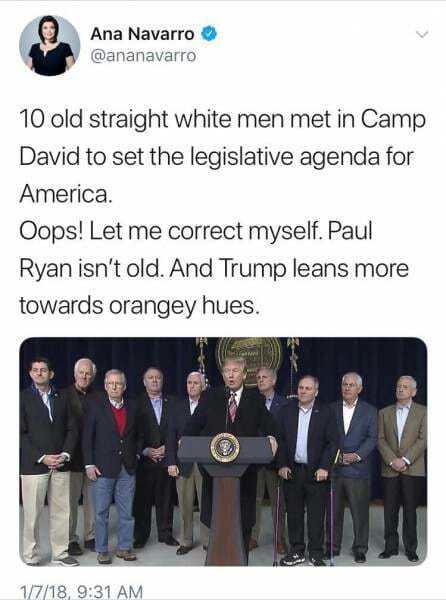 Note the gratuitous dig at the president in the second paragraph of the tweet.

The problem is that those in attendance weren’t exclusively men. A wider photo of those standing around the president reveals that one of them is a woman. She is Secretary of Homeland Security Kirstjen Nielsen.

Show of unity after “Fire and Fury?” pic.twitter.com/l6uwOKZjef

Navarro grudgingly corrected her original error on Twitter but still injected a large  dose of snide into her comment:

Correction: 10 older white men and one woman met in Camp David to set the legislative agenda for America 2018. Yup. So very representative. https://t.co/JxisVRJlVt

Maybe she should have quit while she was behind — that or consulted the source of the photo as to whether there were any other attendees not shown. Indeed there were, and they were women: Education Secretary Betsy Devos was also in attendance, and so was House Press Secretary Sarah Sanders:

Great weekend at Camp David. After big wins on tax cuts, ObamaCare mandate repeal, and conservative judges, the President and Republicans in Congress are united like never before and delivering on our promise of greater prosperity, better jobs, & higher wages for all Americans.

Navarro labels herself as a Republican consultant…but her commentary usually bashes Republicans. Does she provide them with advice regarding how to lose?

Interestingly, when a photo of Barack Obama with his “inner circle” appeared in 2013, along with the report that the president had shuffled his cabinet but with no female nominees, Navarro was silent.

Much of this post was originally seen at MentalRecession