CNN Caught Inventing the News instead of Reporting It 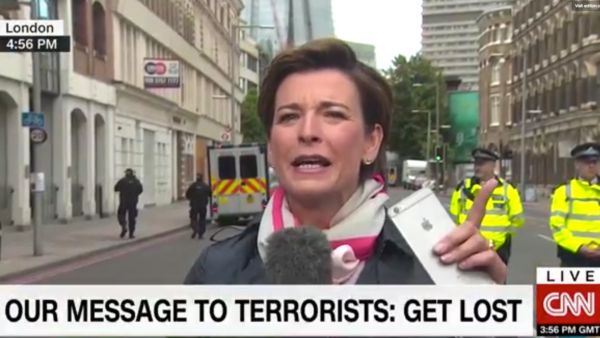 If this report is accurate, and it sure seems to be, CNN has a lot of explaining to do.

A Twitter user named Mark Antro was live on the scene in London on Sunday when much to his dismay he watched CNN producers creating a narrative instead of simply reporting the news. CNN was in London to talk about the Saturday night terror attack when they were recorded gathering together a group of “Asian” demonstrators who were showing solidarity with the victims of the attack. While the demonstrators were there and they were protesting against terrorism, CNN used the opportunity to help craft the narrative and make their viewers think they were seeing something they weren’t.

CNN tutored the demonstrators before staging them in a way that would make the demonstration look bigger and more well-attended than it was. They also pushed the white police officers out of their shot, while making sure to record the Asian police officers (who promptly left when the filming was over).

It’s more disturbing evidence of CNN’s creation of “fake news” and it’s exactly the reason that most American no longer trust the media.

This isn’t news. It’s a fiction being peddled by CNN and other mainstream media outlets.

Watch and learn – the media is lying to you:

One of the few honest reporters in the media, the Daily Mail’s Katie Hopkins tweeted to her followers that they were being deceived by CNN and the BBC. In fact, while the media tried to make it seem that these demonstrations were taking place all over London, Hopkins points out that it was just the same small group traveling around the city.

One of those followers got a screengrab from BBC1 as more evidence:

The guy who filmed the original propaganda production, Mark Antro, had a few more comments explaining just how disturbing this really was:

These are the same mainstream media outlets who wouldn’t repost President Trump’s tweets in the aftermath of the London attack (where he rightly called the attack, terrorism) because they said it was “unconfirmed.” Meanwhile, the very next day they are creating fake news out of thin air.

Don’t trust the media. They are peddling a narrative and they want to deceive you into embracing their particular world view.