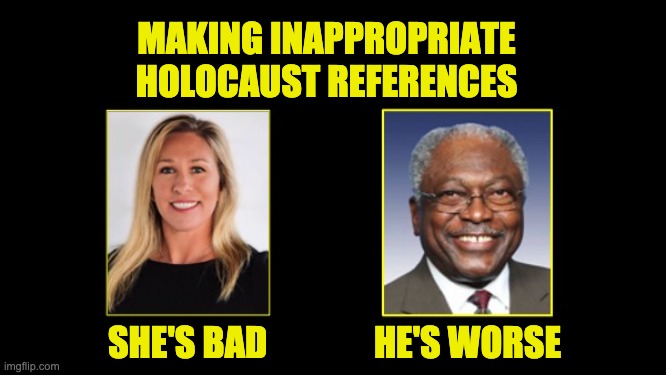 Last week Rep. Marjorie Taylor Greene (R-GA) made a disgusting, insensitive comment about the Holocaust. While she is correctly being slammed for the comments, there’s someone who deserves the criticism for disgusting Holocaust comments more …but has only faced silence from Congress and the MSM. Rep.James Clyburn (D-SC) continually uses the Holocaust as a political weapon without facing any criticism from the mainstream media. Clyburn’s multiple Holocaust references

In an interview with Newsmax, Rep. Greene ripped Speaker Pelosi (D-CA)  mask rules for House Members with inappropriate comparisons to the Holocaust:

“You know, we can look back in a time in history where people were told to wear a gold star and they were definitely treated like second-class citizens, so much so that they were put in trains and taken to gas chambers in Nazi Germany. And this is exactly the type of abuse that Nancy Pelosi is talking about.”

She repeated her comments about vaccine rules being Nazi-like twice more.

It’s a basic rule of American politics. Never use the Holocaust or any related terms, such as Nazis or Hitler, for political warfare. The Holocaust is a singular event in world history and not just because of its scale and inhuman horror. Yes, there have been, and sadly will be, other genocides of other groups, and there have even been other atrocities against the Jewish people.  But generally, a genocide is waged to suppress a group, keep them out of a country’s politics, take their land, or some other economic reason.  The Holocaust was different– the Jews targeted by Hitler, and the Nazis weren’t based on a desire to take over a Jewish nation’s land; Jews held relatively little power–they were just hated. The Nazis took Jews from all over Europe and killed them.

Clyburn however has made more frequent inappropriate references and in one case ripped the grief expressed by the children of Holocaust survivors. None of his statements were met with criticism from fellow Democrats, Republicans, or the MSM.

After the Charlottesville incident in 2017, Clyburn said Trump was like Hitler. He did it again, in January 2018, Clyburn was on the Don Lemon show comparing America today to the election of Hitler:

On March 7th of 2019,  when Rep. Omar’s anti-Semitism first became an issue, Clyburn worked to protect Omar. He talked about her experience in Sudan and in Kenyan refugee camps and, in the process, slammed the children of Shoah victims who dared to preserve the memory of parents’ suffering.

That comment was so hurtful the ADL broke its unspoken rule against criticizing Democrats and actually bashed a liberal.

March 2020 Clyburn made an inappropriate during an interview on the HBO Axios program.

I used to wonder how could the people of Germany allow Hitler to exist. But with each passing day, I’m beginning to understand how. And that’s why I’m trying to sound the alarm.”

Clyburn compared Republicans’ coalescing around Trump to Nazis supporting Hitler amid his rise to power. He argued that falsehoods in Trump’s State of the Union address showcased the issue.

“Fully half of those lies, the Republican side of the House stood up and cheered they knew that was not true. But they cheered him on. I really believe that the people of Germany knew Adolf Hitler was lying. And before they knew it, they no longer had a chancellor but a dictator. Anything that’s happened before can happen again.”’

August of 2020, Clyburn made the inappropriate reference twice in the same weekend.

On PBS, he told Judy Woodruff, “” He [Trump] thinks that the American people will be duped by him, like the people of Germany was duped by Adolf Hitler” And on CNN’s State of The Union,  he said, “I feel very strongly that Trump is Mussolini, Putin, and Hitler,”

And then doubled down on that statement appearing on CNN’s State of The Union:

“I don’t think he plans to leave the White House. He doesn’t plan to have fair and unfettered elections. I believe that he plans to install himself in some kind of emergency way to continue to hold onto office,” Democratic Rep. James Clyburn says about Pres. Trump. #CNNSOTU pic.twitter.com/q0CgdTwWcX

Marjorie Taylor Greene’s comments were hyperbolic and disgusting. However, they still pale compared to the hatred spewed by the number three person in the House Democratic caucus, Rep. James Clyburn.

Why does Clyburn insist on cheapening the memory of the suffering of 6 million Jews who suffered through the Holocaust, along with those who survived the Holocaust horrors and the Jews who mourn the victim’s pain every day? Perhaps it’s because of Clyburn’s friendship with Louis Farrakhan. In 2011 he wrote in the magazine of The Nation of Islam, called The Final Call, “I want to thank Min. Farrakhan for offering up several precepts that we ought to adhere to.” Based on his constant debasing of the Holocaust, perhaps we know which of Farrakhan’s precepts to which Clyburn is referring.

I am not a fan of Rep. Greene, especially after learning of her “Jewish laser” comments. Her reference to the Holocaust was inappropriate and disgusting.  But if fellow members of Congress are going to rip and possibly punish Greene (which she deserves), both parties should first go after a MUCH worse member, James Clyburn.

Please Note: IMHO, along with the Holocaust, other things that shouldn’t be used for comparison are horrors such as slavery in America and Apartheid in South Africa. They are all unique in their own unique disgusting ways and are incomparable to anything else.