Why Is MSM Covering Up Trump’s Closure Of Corrupt ENERGY STAR? 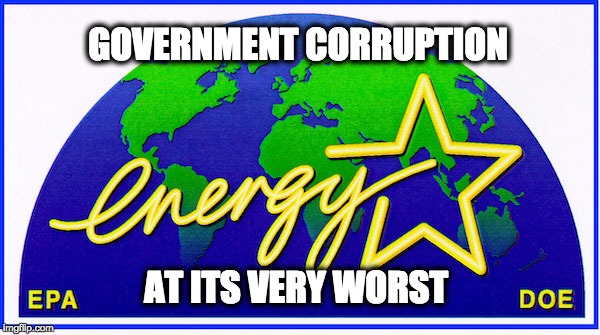 Recently the Trump administration began the ‘close out’ of the ENERGY STAR program, essentially repealing the ENERGY STAR mandate which granted the EPA’S Billionaires Club a complete monopoly over all government procurement for decades. Media Foundations can’t afford to report on the ENERGY STAR repeal, because no other industry profited more from the Junk Science produced by this corrupt federal agency than members of the Liars Club.

EPA claims their exclusive brand of government ‘certified’ energy efficiency has saved over $430 billion for EPA Partners since 1992, making their exclusive product the most lucrative and profitable government commodity on the planet. ENERGY STAR was so wonderful that governments in Canada, Japan, Taiwan, New Zealand, Australia, Switzerland and the European Community all mandated the use of EPA’s superior brand, due in large part to media’s unwavering support for the cutting-edge science produced by EPA’s non-profit partners.

So don’t expect any media coverage of this repeal soon, at least not until after the EPA’s big Awards banquet in Washington DC on April 26. Government and media elites will gather to honoring 152 businesses and organizations with prestigious 2017 ENERGY STAR awards, and there is simply no need to spoil the party with inconvenient facts.

ENERGY STAR is arguably the most corrupt federal program in US history, built entirely on myth, fraudulent scientific research and bogus technical reports. Which explains why most Americans have never heard of the ENERGY STAR program, and couldn’t locate a single shred of evidence supporting the EPA’s phony claims of hundreds of billions of dollars allegedly saved by EPA Partnerships.

How will media spin this fiasco ? The US has never developed a National Standard for the measurement and verification of energy efficiency in products, all energy-savings claimed are estimates made by bureaucrats. Yet lawyers somehow managed to turn the ENERGY STAR brand of ‘certified’ government energy efficiency into a multi-billion dollar commodity, and relied on mainstream media to promote their delusional energy-saving claims to the Global community.

What they didn’t disclose is that ENERGY STAR’s big break came rather suddenly in 2009, when the Obama Administration released the EPA: Lead By Example guidelines and began claiming that ENERGY STAR products save 25-50% more electrical energy than other identical products. No technological breakthroughs were involved in this miracle, only the reshuffling of words on paper were required to create incredible value for this rare commodity.

President Trump has now swept away decades worth of mindless rules and draconian regulations, and it will literally take an act of Congress to bring them back. Small business should pay close attention to the creation of governments contracting laws going forward, to ensure that just and equitable laws provide a level playing field for all qualified competitors seeking to do business with government.

Understanding the extraordinary number of opportunities presented from the repeal of the ENERGY STAR mandate is the first step for America’s business community to prosper from the Buy American-Hire American agenda. Knowledge is power!

The first real economic benefits of this repeal comes in the form of regulatory relief, by cutting funding to bureaucracies created specifically to enforce unproductive regulations crafted for a program that no longer exists. Every honest business in America has been impacted by these regulations, and the double-standards of enforcement by bureaucrats which always favored EPA Public/Private partnerships, non-profit organizations or foreign NGO’s.

Lastly, and by far the most important aspect of this repeal is that it forever eliminates the EPA Department of Junk Science which has severely impacted every segment of science, education and commerce in America for decades. Imagine if products and services purchased by government had to meet verifiable standards known to all, selected through a transparent and uniform process open to all American business without regard for political considerations. This is Huge!

Media Foundations have no interest in disclosing the true economic impacts from all the repeals taking place, because they will now have zero influence over those processes in the future. Media will still act as a shill for EPA’s 16,000 partners, but only a few of their multi-national corporate partners actually manufacture anything. The vast majority of EPA partners are non-profits organizations, civil society members or NGO’s working for the UN, and everyone knows they have nothing of real value to offer for sale to anyone, much less the US government.

Where-as most of the Small Business community would be very interested in supplying products and services to government, the largest procuring agent on the planet. They are ready, willing and able to compete for government business and contracting opportunities, and would gladly step over any number of EPA Partners for a shot at this trillion dollar market.

Crossposted by Request from N4mation.com