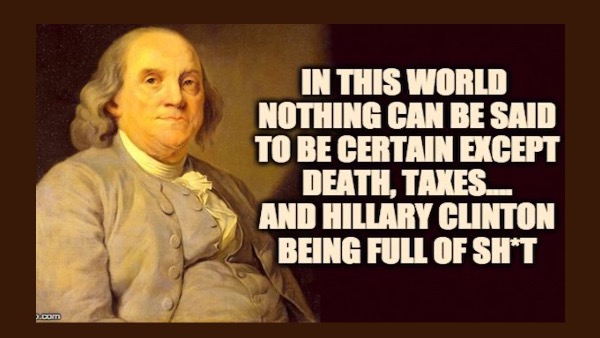 If it wasn’t bad enough that the Clinton Foundation got its financial teeth kicked in almost as soon as Hillary lost power, the news just got worse. Clinton foundation IRS investigation

Hillary was part of the Senate Nixon investigation until she got fired because “She was a liar. She was an unethical, dishonest lawyer.” Remember that in the Nixon investigation, the infamous missing eighteen minutes of tape became the big problem for him?

Hillary doesn’t have the same problem, exactly. But she does have a similar one.  She may have thought the Clinton Foundation was ‘out of the woods’ concerning the IRS investigation. She and Bill both have, after all, had very *ahem* favorable treatment in investigations into criminal wrongdoing for decades.

But the judge, in this case, isn’t letting the Clintons off the hook so easily.

A U.S. Tax Court judge has ordered the Internal Revenue Service to reveal if it criminally investigated the Clinton Foundation, directing the agency to cure a mysterious “gap” in its records in the case.

…In it, Gustafson remanded the case back to the IRS Whistleblower Office (WO), saying the agency’s claim there was no criminal investigation against the Clinton Foundation “was not supported by the administrative record and thus constituted an abuse of discretion.”

“The WO must further investigate to determine whether CI [criminal investigative division] proceeded with an investigation based on petitioners’ information and collected proceeds,” the judge ruled. “… It seems clear we should remand the case to the WO so that it can explore this gap.

Why is this significant?

The Clintons’ situation has been further complicated by the Durham investigation.

More recently, reports have emerged that Special Counsel John Durham is investigating whether an FBI effort to investigate the Clinton charity was wrongly thwarted by politics.

In his latest ruling, Gustafson suggested that the IRS whistleblower office was withholding important information for the case.

“There are facts and information, uniquely within the knowledge of the Whistleblower Office that need to be considered in connection with the resolution of the petitioner’s claim,” he wrote.

The Clinton Foundation has been proven corrupt over and over.  Mostly thanks to Peter Schweizer and his book Clinton Cash. If you haven’t read it as of yet…you should go to Amazon and get a copy ASAP.