No, This Isn’t Satire: Bubba Clinton Blames His Sex Scandal In Oval Office On… ‘Anxiety’

What About His Other Victims? 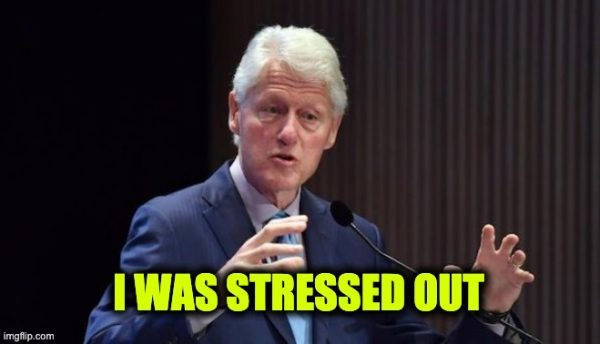 Sure, there are lots of ways a guy can manage stress without sexually assaulting women. Then again, this IS Slick Willy we’re talking about. In the upcoming documentary series about Hillary, Bill Clinton opens up about his past. Bill Clinton claims that his affair with Monica Lewinsky was one of the ‘things I did to manage my anxieties.’ And what about the others? Clinton anxiety

The former President suggests, in an explosive documentary seen by DailyMailTV, that he had the fling with the ex-White House intern while he was in office because it helped with his own issues.

Bill reveals that at the time he met Lewinsky the pressure of the job made him feel like a boxer who had done 30 rounds and he looked at Lewinsky as ‘something that will take your mind off it for a while’. — DailyMail

Splashing his DNA on a blue dress and forever staining with scandal, the life and reputation of an intern was nothing more than an upgrade on a stress ball, a workout, or some kind of meditation session.

Are you buying it?

And neither is THIS familiar name from Bubba’s debauched past Juanita Broaddrick was that because of stress?  But he wasn’t President then.

What in the Hell? On the next episode will he share why he raped.

What about all the other sexual assaults by Bubba Clinton? Gee, he must be a very stressed out guy:

Helen Dowdy, the wife of Hillary Clinton’s cousin, claims she was groped by Bill Clinton at a Rodham family wedding in 1986. She told Jerry Oppenheimer, the author of State of a Union: Inside the Complex Marriage of Bill and Hillary Clinton (page 215), that Bubba groped her “up there.” She tried to pull away, but “he’s a big man.” She says she was eventually rescued when Hillary Clinton turned it into a three-person dance. “He was holding me very close, pulling me into him. … It was so inappropriate.”

Sandra Allen James was pinned against a wall by the former President as he stuck his hand up her dress (Ms. James’ loud scream caused the Arkansas State Trooper outside the door to knock spoiling Bubba’s moment).

Paula Corbin Jones filed suit in 1994, alleging that Bill Clinton propositioned her and exposed himself to her in a Little Rock hotel room three years earlier when he was governor of Arkansas, and she was a low-level state employee.

Carolyn Moffet, a legal secretary in Little Rock who was invited to Bill’s hotel room after a fundraiser. When she arrived she discovered Bubba sitting on a couch only wearing a t-shirt. “When I went in, he was sitting on a couch, wearing only an undershirt. He pointed at his penis and told me to suck it. I told him I didn’t even do that for my boyfriend, and he got mad, grabbed my head, and shoved it into his lap. I pulled away from him and ran out of the room,”

Sandra Allen James, Former Washington-based political fundraiser. She says: Clinton invited her to his hotel room in 1991, pinned her against the wall and put his hand under her dress.

In 1972, when he was attending Yale (and dating Hillary), a 22-year-old woman told campus police at Yale University that she was sexually assaulted by Clinton, a law student at the college. No charges were filed, but retired campus policemen contacted by Capitol Hill Blue confirmed the incident. The woman, tracked down by Capitol Hill Blue in 2007, confirmed the incident, but declined to discuss it further and would not give permission to use her name.

Also, according to Capitol Hill Blue, “former Arkansas students confirmed that Clinton tried to force himself on them when he was a professor.” In 1974, a female student at the University of Arkansas complained that then law school instructor Bill Clinton tried to prevent her from leaving his office during a conference. She said he groped her and forced his hand inside her blouse. She complained to her faculty advisor, who confronted Clinton, but Clinton claimed the student “came on” to him. The student left the school shortly after the incident. Reached at her home in Texas, the former student confirmed the incident but declined to go on the record with her account. Several former students at the University have confirmed the incident in confidential interviews and said there were other reports of Clinton attempting to force himself on female students.

Roger Morris wrote in “Partners In Power“ that another unnamed victim accused Clinton of unwanted sexual advances: A young woman lawyer in Little Rock claimed that she was accosted by Clinton while he was attorney general and that when she recoiled, he forced himself on her, biting and bruising her. Deeply affected by the assault, the woman decided to keep it all quiet for the sake of her own hard-won career and that of her husband. When the husband later saw Clinton at the 1980 Democratic Convention, he delivered a warning. “If you ever approach her,” he told the governor, “I’ll kill you.” Not even seeing fit to deny the incident, Bill Clinton sheepishly apologized and duly promised never to bother her again.

In the book, “Uncovering Clinton,” another woman, “the wife of a prominent Democrat” (who remained unnamed), accused Clinton of sexual abuse in 1996. Clinton started getting physical, trying to kiss her, touching her breasts. The woman said she was stunned. She had no idea how to respond. “I’ve never had a man take advantage of me like that”… As Clinton pressed himself on her, she said, she resisted–and finally pushed him away. What happened after that? I asked. Clinton turned away, she said. She hesitated, and she said softly and with apparent discomfort, “I think he finished the job himself.”

Lt. Col. Robert “Buzz” Patterson wrote a book about Clinton called Dereliction of Duty in which he accounted yet another victim of sexual abuse by the then-president. He wrote that a female stewardess on Air Force One complained that Clinton “sexually molested” and “cornered” her on the flight. Per Patterson, the woman only “wanted an apology.”

Some people, when they get stressed out, grab a pint of ice cream. Bill Clinton grabs women often without permission. Shouldn’t former President get the heavy-handed contempt that decent society has heaped upon such disgraced famous figures as Bill Cosby, Jeffrey Epstein, and Harvey Weinstein?

Keep in mind what he said about Monica, a young intern–. She is ‘something that will take your mind off it.’

She wasn’t a PERSON. She was a DISTRACTION–just like his other victims.