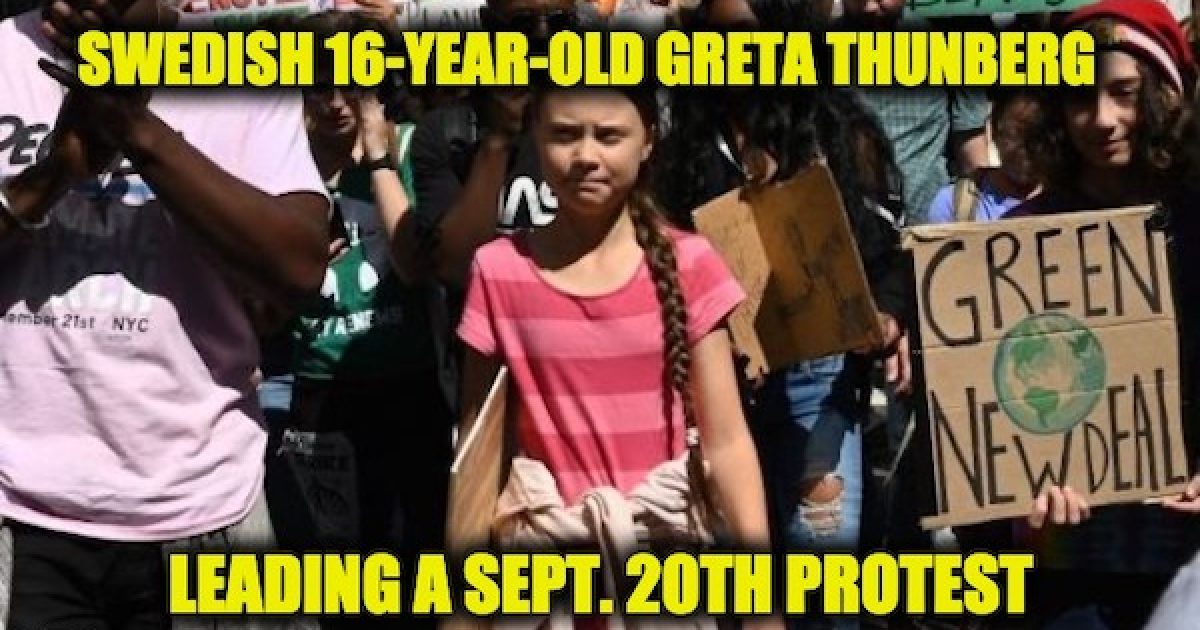 Was the so-called global climate strike on Sept. 20th just a celebration of Enron Earth Day 2.0?

Corporate media will pretend that kids spouting tired old clichés was a sign of their deep understanding of climate science, but were activist quoting logic from Mao’s Little Red Book or the Poised For Profit report produced by Climate Solutions? Would the media’s young revolutionaries know the difference, or even care?

After all, the Harvesting Clean Energy program operated by Climate Solutions did provide the working business model for Obama’s $100 billion investment in the Save Energy Now program. Why didn’t media seek ‘sound-bites’ from the architects of the Clean Energy Economy, which has for years claimed to be creating the jobs of the future? Not little kids that had yet to be born before US bureaucrats had already created State-Owned Enterprises to market “certified” energy efficiency products and services.

Now the Talking Heads of TV are supporting the Green New Deal and demanding that we forget about all those high-paying jobs that had once been promised by radical corporate environmentalist (but never happened).

If you think this sounds plain crazy, you would be wrong. Media believes it’s perfectly reasonable! Why?

Climate Solutions was a franchisee of the notorious Earth Island Institute, which operates as an incubator for radical organizations, producing the most violent anti-American and anti-Capitalist environmental groups in America. Some people may wonder why bureaucrats sought out Climate Solutions, a small, obscure group to operate multi-billion dollar programs, but not mainstream media. They’ve known all along about the connections of the Earth Island Institute to the corporate green agenda, and it’s founder David Brower. Who had a favorite saying about himself, which came in the form of what he described as a backhanded compliment from a former EPA administrator, “Thank God for Dave Brower? He makes it easy for the rest of us to look reasonable”.

Only a narcissistic madman could make the EPA look reasonable! Which is the entire point of the Green New Deal. After spending hundreds of billions of US tax dollars on so-called scientific research for the EPA, DOE, & CIA to design the jobs of the future, we are all supposed to pretend the Green New Deal is now the best plan for GHG emission reductions to save the planet. Forget about that old Clean Power Plan of Barak Obama. Long live the New Green Deal! This plan is so dumb that even the most radical university professor couldn’t explain how any of these proposals would pass legislation. Therein lies the problem. Only the sock-puppets in the media get to interpret these events, like the brilliance of a 16-year-old girl from Sweden defending the UN-IPCC, UNIDO’s Green Industrial Platform, UN Agenda 21 Development Plan and Paris Climate Deal without ever once mentioning the source of all that cutting-edge science provided by the EPA.

Fake News will portray this as a battle for the soul of America, pitting their enlightened young European heroine against ORANGE MAN BAD and his deplorable supporters that believe widespread government corruption represents a far greater threat to working Americans than the weather.

At the last Harvesting Clean Energy conference I attended in 2006, James Woolsey, the former CIA Director was the keynote speaker for “Harvesting Clean Energy, National Security, and the Path to Energy Independence.” Wouldn’t it make more sense to have that former CIA Boss explain the differences between President Obama’s old plan for Energy Independence and the one that was actually implemented by President Trump?

There is a real difference, which is worthy of debate, but it shouldn’t involve young people with zero understanding of science, business, trade, law, and National Security.

We should unite on this issue. I believe every American would enjoy some comic relief as the counterintelligence experts explain the Deep State science of Harvesting Clean Energy. Imagine the specter of watching President Trump destroying a former Intelligence Director on the alleged science supporting all those green jobs of the future would be down-right hysterical. Now, who wouldn’t want to watch that debate? Maybe even a pay-per-view event to help fund the wall.

Is The Green New Deal Built On An Old ‘Certified’ Big Lie?